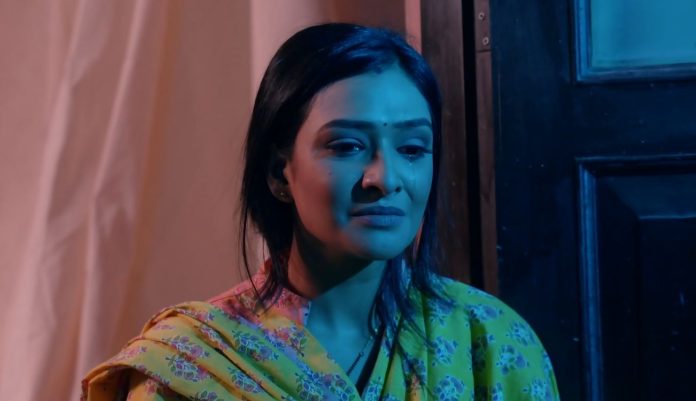 Bhagya Lakshmi 13th January 2022 Written Update Divorce Shalu doesn’t tell Neelam that Lakshmi has gone out to find a job. Neelam asks Shalu to call Lakshmi out. Shalu tells that Lakshmi isn’t at home. Neelam yells at Rano for not giving any good values to Lakshmi. She tells that middle-class girls have values, but sorry to say that Rano’s girls have no such values they expected. Shalu tells that Rishi’s values should be questioned, not Lakshmi. She adds that Lakshmi did a good thing by coming home, because no liars live with them. She answers Neelam well. Neelam leaves from there after the insult.

Rano tells Neha that Shalu insulted Neelam, and now Neelam will never give an entry to Lakshmi in the house. She plans to take alimony for Lakshmi’s divorce. Lakshmi goes for the interviews at different places, but fails to get the job because of lack of experience. She rushes to another place and learns that the job she needed is given to someone else. She sheds tears in sorrow. Rano reaches Rishi’s house and meets Neelam. She demands the alimony that she will get after Rishi and Lakshmi’s divorce. She asks Neelam to give 50% of the property as compensation. Neelam is left shocked. What will Lakshmi do now? Keep reading.

Earlier in the show, Rishi runs back to see Lakshmi, but she leaves by then. Lakshmi doesn’t give up. She calls another company to fix the interview. She finds an old man getting an attack. She runs to help. Karishma tells Sonia that Neelam has gone to Lakshmi’s house to get her back for Rishi’s sake. She tells how Pandit ji warned Neelam about the threat on Rishi and asked her to get Lakshmi back. She adds that Rishi is under threat until 7 days, he should be away from iron. She tells that Neelam worriedly called Rishi home, but he didn’t come till now. Neelam tells Rano that she has come to take Lakshmi home. She checks the house. Rano tells that Lakshmi isn’t at home. Shalu gets triggered seeing Neelam.

Lakshmi takes the old man to the hospital for his treatment. She asks his friends why are they joking this way when the person is really ill. She tells that friendship is important than money. She gets an urgent call. She finds a boy in pain and runs to help him. Doctor thanks her for help. He tells that the boy has a leg fracture, he just fell down the bed and got hurt again. Lakshmi tells a story to the boy to lessen his pain. Darshan looks at Lakshmi, who ignores the important calls to be with the boy. He realizes that she is leaving her interviews to help people. Neelam vents anger on Rano, Shalu and Bani.

Rano tells that Lakshmi didn’t do right to leave her Sasural. Neelam tells that she believed Lakshmi’s values, but Lakshmi has proved her wrong. She asks does anyone leave the house because of a small misunderstanding. Shalu tells that they make relations with heart, not seeing the bank balance. She asks Neelam not to talk bad about Lakshmi’s values, but think of Rishi who had an extra-marital affair. Neelam warns her to stay in limits. Shalu tells that Rishi did wrong, his values should be questioned. She answers Neelam well. She tells that Lakshmi made a new family, but even her old house is of her. She feels Lakshmi did right to come home, where liars don’t live. Neelam calls them dirt.

Shalu tells that she just told the truth. Neelam asks her not to lecture her on truth. Rano tells that Lakshmi has gone to find a job. Neelam asks what does Lakshmi know, what work will she do here. She thinks Lakshmi will embarrass the family. She tries to bribe Rano. She tells that Rano should ask Lakshmi to return to her Sasural. Darshan finds Lakshmi’s CV and checks it. She asks why didn’t she go for the interview. Lakshmi tells that nothing is important than someone’s life.

Doctor tells about Amar’s acidity attack. Darshan tells that he always makes them worry. She tells that there is no harm to show the patient to a doctor and get help. Amar asks Darshan to have chips. She asks them not to have packaged oily food. Darshan tells that she has become Amar’s Biji to scold him. They have a laugh. Lakshmi asks them to have healthy food diet. She asks them to take care, she has to leave. She learns that the job vacancy is filled. Darshan hears her conversation. He tells that he has a vacancy, she can join that job. She tells him that she has no experience.

He tells that its okay, she can gain experience with time. She asks the job profile. He asks her to handle sales at the jewellery store. She agrees. He asks her not to scold him as Biji there. She thanks him. Rano and Neha think Lakshmi won’t get a job. Lakshmi returns home. Mama ji asks her did she get a job. Lakshmi gives the good news that she got the job with a salary of 15000 rupees per month. He congratulates her.

He tells that he is proud of her, her parents will be proud as well. Shalu tells that she will make halwa for Lakshmi. Rano reminds Lakshmi to give her money when she gets the salary. She makes a plan to get alimony when Rishi and Lakshmi’s divorce. Neelam worries for Rishi, who comes home late. She asks him why did he get so late knowing the threat on his life. Rishi asks her to relax. Karishma tells that Pandit is scaring them to get money. Neelam asks if she doesn’t believe in Markesh dosh.

She tells that Malishka has lied to them that she saved Rishi’s life. Malishka waits for Rishi. Kiran asks her is she getting insecure again. Malishka tells that everything is normal now, she is happy to move on, but she feels guilty about her lie to Rishi. She tells that she wants Rishi to know that Lakshmi isn’t important. Kiran tells that Rishi is really in danger. Malishka doesn’t believe the Markesh dosh. She calls it mere accidents. Neelam tells that she doesn’t trust Malishka.

Rishi asks Neelam to not worry, he is totally fine. He tells that he has to go out. Neelam asks him to just take rest in his room. Lakshmi misses her parents. She doesn’t want Shalu and Bani to get punished because of her. She tells that she will always support her sisters, she won’t fall weak, she will instead become strong. Shalu gets halwa for Lakshmi. She tells about Neelam’s visit. Lakshmi defends Neelam who is elder to them. She tells that they shall not look behind and just move on. She asks them to support her and motivate her. Shalu and Bani hug her.

Reviewed Rating for Bhagya Lakshmi 13th January 2022 Written Update Divorce: 3/5 This rating is solely based on the opinion of the writer. You may post your own take on the show in the comment section below.