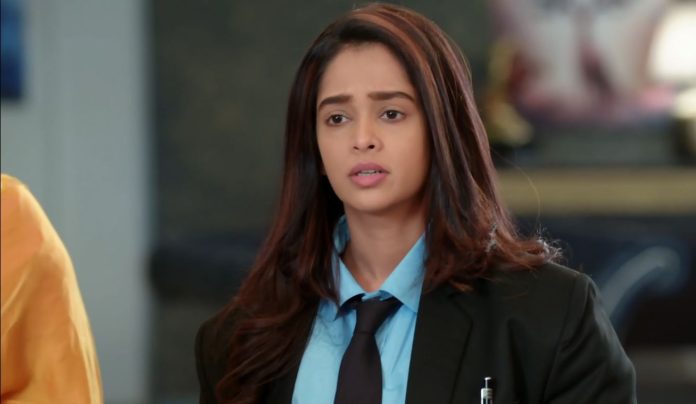 Kumkum Bhagya 13th January 2022 Written Update Prachi arrested Rhea and Aaliya realize the fake raid by the fake IT officers. They stop Prachi and Shahana from leaving. Rhea unmasks Prachi and Shahana by pulling off their disguise. She snatches the file from them and checks the papers they have stolen. Prachi and Shahana get badly caught. Rhea also calls the police to get Prachi arrested for the fraud raid. Prachi comes up with a drama. She tells Pallavi that she isn’t a part of the family, she doesn’t regard Kohlis as her family, she isn’t the bahu of the house.

She distracts Rhea and suddenly takes the papers from Rhea’s hands. Prachi tears the papers in a second and leaves Rhea shocked. She throws the papers’ torn pieces on Rhea’s face. Rhea tells that nothing can help Prachi today. The police arrives to arrest Prachi. Rhea wants Prachi out of the house at any cost. Prachi is left stunned by Rhea’s unexpected move. What will Prachi do now? Keep reading.

Earlier in the show, Prachi and Shahana get the papers. They are glad that their mission completed. Vikram swears that he is saying the truth. Pallavi compels him. Dida tells her that he won’t be able to tell her the truth. She also lies saying that Vikram is thinking of a wedding anniversary gift for Pallavi. She tells that Vikram is planning a surprise, they shall have a big party at home. Pallavi thanks her for being so thoughtful. Aaliya asks Pallavi to come with her. Dida tells Vikram that she will always save him from his wife.

She tells that she is happy that he is helping Prachi, because he believes that Prachi is the real bahu of the house. He tells that he wanted Rhea to become his bahu, but he is supporting the truth, Rhea has wronged Prachi so he wants to do justice with the latter. She wants him to get Prachi her rights. She feels proud of him. Prachi tells Shahana that something is really wrong, they should leave. Shahana returns the mobile phones. She tells that they are leaving. Rhea stops them to confront.

Rhea asks Prachi and Shahana to make an entry before taking the things with them. Prachi tells that she will do it. Rhea recalls the time when Aaliya told her about the fake raid and the fake IT officers. Rhea realizes that its Prachi and Shahana who took the disguise to fool them and get the papers. She calls Prachi close to pull off the fake beard. Dida and Vikram get worried seeing the new drama in the living room. Rhea asks Shahana to remove her disguise herself. She takes the folder from Prachi’s hands. She checks the papers. She tells that Prachi didn’t come to raid, but to steal the papers.

She adds that Prachi came to claim her rights. She asks Shahana not to interrupt. She tells Prachi that she did a lot, but now she will face a real raid. She threatens Prachi. She asks Dida why did Prachi choose a wrong way if she is so true. She calls Prachi a wrong doer. Prachi tells that Rhea had lied and cheated her, Rhea forced her to take this step. She tells that sometimes one has to cheat to bring out the truth. She calls it a battle between good and evil. Aaliya asks Prachi not to lecture her. She asks Rhea to call the police. Shahana argues with Aaliya.

She insults Prachi and tells that Prachi just wants to call herself Kohlis bahu. Prachi tells that she doesn’t regard Kohlis as her family. She snatches the papers from Rhea’s hands and tears it in a huff. She tells Rhea that she will never let her lie become a truth. She asks Rhea to see her lie dying and remember that there are no fake papers now. She tells that everything is finished, Rhea got defeated, her lie can never replace the truth. She tells that she is Ranbir’s wife and Kohlis Bahu, that’s the truth which will never change by anyone’s opinion. Jai finds Ranbir saddened and hugs him.

He gives hope to Ranbir. Ranbir tells that he will inform Vikram before leaving for London. Jai finds him emotionally stressed. He wishes that Ranbir’s life gets sorted. He wants Prachi to understand his love. Prachi calls Rhea a failure. She tells that Rhea’s planning didn’t work. Shahana taunts Rhea to keep dreaming. Rhea calls Prachi shameless. Prachi tells that they are less shameless than Rhea. Prachi and Rhea get into a loud argument. Prachi is surprised that elders have also supported Rhea in the disgusting act. Aaliya asks her to shut up, she may slap her. Prachi tells that she will not take the slap when she isn’t at fault.

She warns Aaliya to keep her bad ideas to herself. Pallavi tells that Prachi is like dirt to them. Prachi tells that she had come to Kohlis as pure water, but she has become dirt now because they got added to her. She gives a befitting reply to Pallavi’s humiliating remark. Police arrives to arrest Prachi. Ranbir thinks of Prachi. He leaves for the airport. He wants to go away from Prachi so that she stays happy. He tells that Prachi doesn’t want to see his face, she doesn’t need him, its better that he goes too far. Inspector tells Prachi that he has come to arrest her for theft.

Prachi asks him how can he arrest someone on a baseless complaint. He tells that Rhea had lodged the complaint of theft and cheating. Prachi denies the blames. Rhea tells Inspector that she isn’t getting her expensive necklace. Prachi tells that Rhea is lying. She is ready for the check. Rhea asks Inspector to find out the truth. Lady constable checks Prachi’s clothes for the necklace. Rhea tells that Prachi always wants to steal her things. Prachi gets alert when she finds Rhea blaming her confidently. Rhea asks Inspector to check Prachi’s room. Shahana struggles to defend Prachi.

Rhea asks Dida to show Prachi’s room to the police. She taunts Dida who came ahead to support the fake officers. Dida tells that she has seen the world, Prachi didn’t steal anything. Pallavi helps Rhea in proving the theft blame true. Rhea tells that she will punish Prachi now. Prachi tells that she will always raise the voice and courage to fight Rhea’s evil. Rhea asks her to get ready for the arrest. She remembers planning to keep the diamond necklace in Prachi’s room to get her arrested. Prachi sees Rhea and Aaliya’s wicked smile. She knows that Rhea has hidden the necklace in her room to trap her. How will Prachi save herself? Will Ranbir return home to save Prachi? Keep reading.

Reviewed Rating for Kumkum Bhagya 13th January 2022 Written Update Prachi arrested: 2/5 Same storyline as Kundali Bhagya’s Preeta’s arrest. Just one hit episode, followed by series of flops. This rating is solely based on the opinion of the writer. You may post your own take on the show in the comment section below.