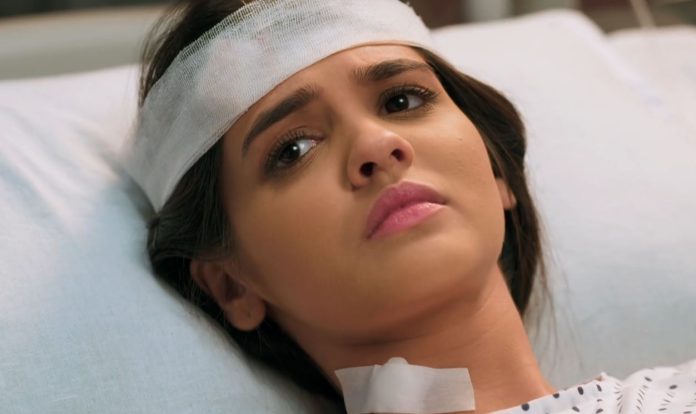 Yeh Rishta 12th January 2022 Written Update Akshara’s dilemma Abhimanyu breaks down seeing Akshara not breathing. Mahima gets shocked seeing broken Abhimanyu and still Akshara. Manish and Kairav ask shocked Aarohi to tell them what happened to Akshara. Suddenly, Akshara starts breathing again. This brings hope in Mahima. Mahima tells Abhimanyu that Akshara is fine and will be stable soon. Abhimanyu cries with relaxation and emotions. He breaks down with mixed feelings. In his thoughts, Abhimanyu asks Akshara why she troubles him like this. He says he will die like this.

He asks Goenkas to meet Akshara in ward only. Aarohi says she will stay with Akshara in OT. Harshvardhan asks Aarohi to go with her family. Everyone except Aarohi leaves for the ward. Abhimanyu comes out of the OT. He recalls Akshara’s condition during the operation. Akhilesh receives a message and tells Suhasini and Swarna that Akshara is fine and being shifted to the ward. Suhasini thanks God. Anand gives Goenkas water. Aarohi receives Suhani’s call and goes away to talk to her. Kairav asks why only Abhimanyu performed Akshara’s operation? He says that due to Aarohi being a medical intern, they know that doctors don’t operate on someone they love a lot.

Everyone looks at Kairav weirdly. Kairav says he meant that doctors don’t operate on someone connected to them. He asks if anyone could have done this operation, then why Abhimanyu did it. Kairav asks everyone to see Aarohi’s condition. He says otherwise Aarohi could have been a part of Akshara’s operation too. Mahima comes and tells Kairav that he is right that it’s a rule that doctor’s generally don’t operate on someone from their family. She explains that it’s not a hard and fast rule. Mahima says doctor’s will power and situation should be seen. She says that Abhimanyu is one of the best doctors and handled the situation greatly. Mahima says no one can deny the truth that Abhimanyu saved Akshara.

Aarohi feels angry overhearing Mahima’s words. She asks everyone to be happy that Akshara is safe now. Mahima asks everyone to meet Akshara after she gets transferred to the ward. She excuses herself. Tense Aarohi tries to make herself believe that everything will get alright as Akshara is fine now. On the other hand, Abhimanyu sits in front of God’s idol and recalls Akshara’s condition from the operation theater. He sees AR written on his hand. Abhimanyu turns and gets scared seeing Akshara burning and going away from him. He asks God what was this and why is this happening to him?

Abhimanyu tells God that he can accept everything but doesn’t want Akshara to die. He says he can live seeing Akshara alive and happy but doesn’t want anything to happen to Akshara or voice. Abhimanyu cries and wishes for Akshara’s happiness. He asks God to give all the pain of Akshara to him. Abhimanyu tells God that he will fight with him/her if anything happens to Akshara. In anger, he puts his hand on the dhoop and ‘R’ from AR gets removed. Abhimanyu recalls other incidents which happened in marriage functions and which proved that God wants him and Akshara to be together. “Gauri Shankar” song plays in the background.

Abhimanyu sees Akshara being taken to the ward at the same time. He holds Akshara’s hand and takes her to the ward. Abhimanyu makes Akshara lie comfortably on the ward bed. He sends the nurse outside and cares for unconscious Akshara himself. Neil notices everything from outside. Aarohi is seen taking Manish and Kairav towards Akshara’s ward. Neil sees Abhimanyu applying ointment on Akshara’s feet wounds. He prays to God to make others see Abhimanyu and Akshara’s love and care for each other. Neil says it’s very difficult to live without the person we love. He says Abhimanyu can’t live without Akshara.

Abhimanyu sits beside Akshara and bandages her neck wounds. He scolds unconscious Akshara for keeping big nails. Neil says Abhimanyu even cares for Akshara’s broken nail pain. He says this is true love not what people show off with photos on social media. Neil calls social media love fake. He prays to God to write Abhimanyu and Akshara’s like love in everyone’s fate. Neil prays to God to let Akshara and Abhimanyu be together now as it would be unfair to keep them away from each other. Abhimanyu thinks to give painkiller to Akshara. He tells Manish and Kairav that Akshara is better now and is resting.

Kairav and Manish look at unconscious Akshara with worry in their eyes. Neil tells Abhimanyu that Akshara’s family is staying with her. Abhimanyu says it’s his right too to be with Akshara and check her. Neil asks Abhimanyu by what right would he stay with Akshara as his doctor’s duty ended and others will take care of Akshara now. Neil reminds Abhimanyu that he is marrying someone else for Manjiri’s happiness. Abhimanyu says he has the right and will be near Akshara anyhow. Neil asks Abhimanyu to show his rights on Akshara if he has them. Aarohi makes a Video call to Suhasini to make them see unconscious Akshara. Goenkas asks Aarohi to take care of Akshara. Aarohi agrees and asks her family to not worry.

She reads Akshara’s reports and tells her family that Akshara will gain consciousness till next morning. She says she will stay with Akshara to monitor her. Mahima comes and tells Aarohi that she will monitor Akshara. She says Akshara is in critical care and needs a senior doctor. Mahima asks everyone to return home and tells Kairav to wait in the waiting area. Manish says he won’t leave Akshara till she gains consciousness. Aarohi requests Mahima to let her stay. Mahima gets angry and tells everyone that Akshara’s vocal cords would get affected if she tries to talk to anyone after getting consciousness. She asks everyone to understand this.

Manish, Kairav and Aarohi leave. Mahima thinks Akshara needs Abhimanyu the most now near her. She and Abhimanyu decide that Abhimanyu will stay with Akshara. Mahima asks Abhimanyu to call her in any need as she will be in the hospital only. Abhimanyu checks Akshara’s carefully. He holds her hand and stares at her continuously with care. “Yeh Rishta Kya Kehlata Hai” title song sad version plays in the background. Worried Neil is seen waiting outside the ward. At Goenka Mansion, everyone is seen awake in Akshara’s tension. Manish and Swarna get surprised seeing Aarohi too worried for Akshara.

Next morning, Abhimanyu is seen staring at Akshara sitting in the same position. He tells unconscious Akshara that they are written in their fates. Abhimanyu asks her why can’t they be together for their whole life? Akshara gets conscious and says “you” with surprise. In the next episode, Akshara will ask Aarohi to answer the question she asked her before the accident. Neil will angrily congratulate Abhimanyu for marrying Aarohi the next. He will call it Abhimanyu’s biggest mistake of his life. Akshara will be shocked to hear Aarohi telling someone that she will not miss her exam at any cost. Aarohi’s ID will fall from Akshara’s hand. Akshara will question herself, if she should let Abhimanyu and Aarohi’s marriage happen? She will think that three lives will get ruined with one misunderstanding.

Reviewed Rating for Yeh Rishta 12th January 2022 Written Update Akshara’s dilemma: 5/5 This rating is solely based on the opinion of the writer. You may post your own take on the show in the comment section below.