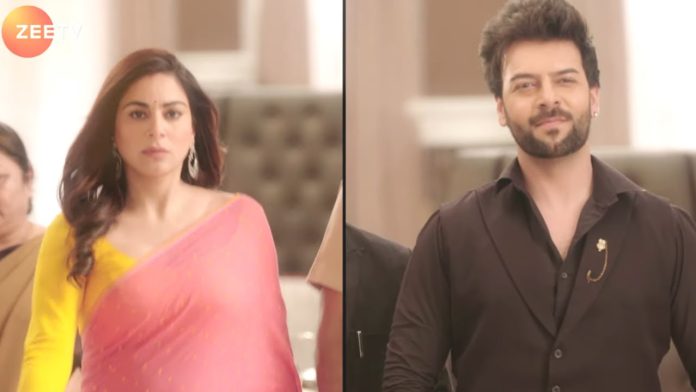 Kundali Bhagya 14th January 2022 Written Update Party entry Prithvi orders the hired police inspector to take Preeta away and kill her. He promises to transfer money to the Inspector. Preeta gets hint of the upcoming danger by overhearing the conversation at her end. Inspector asks the constable to drive towards the jungle route. She senses the danger ahead and gets cautious. Karan and Prithvi get into a heated argument at home when the latter calls Preeta a criminal, who already killed Pihu. Karan doesn’t want to hear a word against Preeta.

He gives a final warning to Prithvi. He tells the family that he believes Preeta who has come to help them. Preeta falls in big danger, but she is smart enough to cut off the threat on her life and return home to expose Prithvi’s plans. Prithvi throws a big party at home. The party begins at the Luthra mansion, where Prithvi welcomes his special guests. He doesn’t expect Preeta to return and thinks he finally got rid of her. He hates her and wants to see her dead. Karan thinks of rescuing Preeta. Preeta will make a grand entry in the party and shock Prithvi. What will Preeta do to save herself? Keep reading.

Preeta tries to find some way to get released. She thinks Naagre has done too wrong to support Prithvi in torturing the Luthras. The lady constables get down the van when they see the real police at the checkpost. The fake police Inspector asks the constable to drive the van away soon. The police follows the fake police van to catch them and find out the matter. Preeta realizes that the police who arrested her isn’t the real one. She thinks Prithvi has sent the goons for some big motive. Karan tells Prithvi that Preeta won’t kill anyone. Prithvi tells that only Preeta can tell her motive, since she killed Pihu also.

Karan warns him and gets into a loud fight with him. The family asks Karan to stop fighting. Prithvi asks Karan not to support Preeta who ruined his family. The family worries seeing their fight getting more serious. Karan defends Preeta. Prithvi tells that he has saved the family and gave them a shelter. Rakhi asks them not to fight, Preeta didn’t try to kill Naagre. Karan asks Prithvi not to take Preeta’s name. He tells that he will bring Preeta home. Kareena takes Karan with him. Prithvi shouts on the family members. Kritika finds Prithvi hurt and gets concerned for him. Sherlyn gets angered seeing this.

Preeta asks the goons to let her go. She questions if they are kidnapping her, but why. The goon asks her to shut up. She tells that she will spare them if they let her go. She asks if they are working for Naagre and Prithvi. The goons try to get rid of the real police. Preeta shouts for help. Kareena worries for Karan’s wound. Karan tells that he is okay. Rakhi calms down Kareena. Kareena still blames Karan. Karan asks her what does she want. He tells that he will not become Prithvi’s slave, he is a liar. She asks him not to get into a fight with Prithvi, else he will suffer. She lectures him that he isn’t thinking of family.

She cries that the family is in sorrow, Rishabh already left them and now Karan is inviting problems. He tells her that he will not become Prithvi’s slave, he will not indulge in any fight, but won’t accept any nonsense. Kareena comforts Karan’s wounds. Kritika takes care of Prithvi. She asks him what is he thinking. He wants Kritika and Luthras on his side. He thanks her. Kritika goes. Sherlyn meets him secretly. He tells her that they don’t need to get scared or hide from anyone. He tells that she knows what she means to him. He asks her help and support in his big plan. She asks him what does he want to do.

She asks him about Preeta. Prithvi calls the goons and orders them to kill Preeta. The goon aims at Preeta. Preeta tries to escape, but is handcuffed. The goon misses the aim. Preeta stays safe. The goon informs Prithvi that he did his work. Prithvi asks him to leave from there immediately, nobody should know that Preeta’s death was a conspiracy. Preeta offers a bigger amount to the goons. She asks them to let her free. Prithvi tells Sherlyn that Preeta is dead, her chapter is over. She is shocked to know this. He tells that he got Preeta killed, because just he can rule over the Luthra family.

The goons take Preeta in the van. She asks them if they really want to kill her. She asks them to let her go. The goons doesn’t seem to accept the offer. They stop the van at the cliff end and get down, leaving handcuffed Preeta alone in the van to die. They push the can down the cliff. Preeta falls in danger. Karan feels uneasy at home and grows worried for Preeta.

Reviewed Rating for Kundali Bhagya 14th January 2022 Written Update Party entry: 3/5 This rating is solely based on the opinion of the writer. You may post your own take on the show in the comment section below.