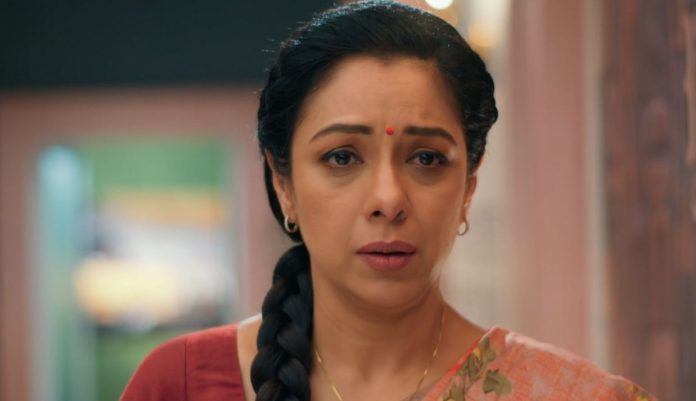 Anupama 14th January 2022 Written Update New trouble Vanraj asks Anupama why she is seeing him like this. Anupama asks Vanrah if he remembers that Malvika is Anuj’s sister. Vanraj asks Anupama what he did that she requires to remind him about Anuj and Malvika’s relation. He tells Anupama that first Kavya went on break due to this misunderstanding and now she (Anupama) is saying the same thing to him. Vanraj tells Anupama that he isn’t at fault that his business partner Malvika is extra friendly. Anupama tells Vanraj that she doesn’t want to get into his and Kavya’s matter. Vanraj asks her to not do so.

Anupama reminds Vanraj that he and she both saw Malvika’s condition last night. She says she doesn’t want to see Kavya in a similar condition. Irritated Vanraj tells Anupama that he is only focused on his work and doesn’t have anything to do with either Kavya or Malvika. Anupama tells Vanraj that by saying this he cannot shirk his responsibilities. She tells Vanraj that Kavya is his responsibility and he has to be responsible for Malvika. Angry Vanraj tells Anupama that he isn’t doing anything wrong. He makes it clear to Anupama that he has only a professional relationship with Malvika and they just like to work with enjoyment and nothing else.

Anupama tells Vanraj that nothing else should be between him and Malvika. At Shah house, Baa asks Samar if he and Nandini had an argument. Samar tries to hide his and Nandini’s argument from Baa. Baa explains to Samar that arguments and fight’s sadness can be seen behind the person’s smile. She tells Samar that she can sense some tension between him and Nandini. Samar tells Baa that he wants to marry Nandini as soon as possible. When Baa teases Samar, he tells Baa that he just wants Nandini to marry him and help Kinjal in household responsibilities. Baa pulls Samar’s ears and teases him. Samar cutely requests Baa to get him and Nandini married soon.

Baa sarcastically tells Samar that she will soon get him married to Nandini. Both Grandson and Grandmother reminisce about their past moments. Baa caresses Samar and prays for happiness and success. Samar thanks Baa as she tells him that she will soon get him married. She asks Samar if everything is really fine between him and Nandini. Samar recalls his and Nandini’s arguments that occured because of Kavya. He tells Baa that everything is fine as little arguments happen in love. Baa gets worried thinking if Samar and Nandini’s relationship is getting affected due to Vanraj and Kavya’s deteriorating/bitter relationship.

On the other hand, Anupama asks Vanraj to always remember his limits with Malvika as the latter forgets her friendship limits. She asks Vanraj to handle Kavya as she would handle Malvika. Anupama warns Vanraj if he forgets his limits then they will be confronting each other like before. Bapuji prays for Kavya to get a good job soon. Paritosh shares his experience of being jobless for some time with Baa and Bapuji. He also wishes for Kavya to get a job soon. Samar comes and kisses Baa on the cheek for making Undiyo. Bapuji says Undiyo has masalas just like their lives. He tells everyone that Anupama had truth with herself but now she proved that she has courage too.

Samar and Baa jokes, making everyone laugh. Bapuji says Anupama fought with illness, society, made her own way to success, opened a dance academy and gave Vanraj a place for a cafe in it and at last got cheated but did not lose courage. Samar says then millionaire Anuj made an entry. Baa says it’s just like, “Phata Poster aur Nikla Hero”. Paritosh says Malvika made an entry before the year’s end. Baa wishes that this year goes well. Bapuji says no person doesn’t always remains happy. He says life gives people a package dream in which people get little tears, happiness, a little sadness, little pleasure, some broken dreams and some fulfilled dreams.

Bapuji says elders of the house can just pray that they get their children’s share of tears, sadness and broken dreams. Samar asks Baa and Bapuji to not get so much senti. Paritosh asks everyone to celebrate Sankranti with happiness. Everyone talks about Mamaji. Samar jokes and makes everyone laugh. On the other hand, Anupama enters Anuj’s office and tells him something. Anuj finds it difficult to hear Anupama’s words. Anupama asks Anupama to hear carefully. She tells Anuj that some relationships can be visible as more than friendship but they are still friendships. Anuj sarcastically tells Anupama that he understood. He tells Anupama that some relationships can be seen just as friendship but are actually more than friendship.

Nandini says to Samar that no one tried to stop her aunt (Kavya). Samar asks Nandini if Kavya would have stopped if they tried. He tells Nandini that issues are between Vanraj and Kavya and his family doesn’t interfere in between them. Samar further tells Nandini that both Vanraj and Kavya are at fault, not his family. Nandini reminds Samar that Kavya is called a homewrecker, pati chor and gets insulted much more. She asks Samar when Vanraj makes the same mistake, why he doesn’t get punished like Kavya. Nandini says Vanraj’s mistakes are always forgiven or hidden by the Shah family but not Kavya’s. She tells Samar that Kavya has gotten very lonely.

Samar tells Nandini that Kavya never appreciated Baa and Bapuji’s efforts towards her. Nandini tells Samar that the Shah family would have never let Kavya go away alone, if they would have ever appreciated her. She asks Samar to tell her if his family would ever let Vanraj go away if he asks his family to give him a break. They continue arguing about Kavya and Vanraj. Samar asks Nandini to understand that Kavya is an adult and can handle herself as she is the one who created issues for herself. Nandini asks Samar to see he always finds Kavya at fault. She asks Samar to understand that after they get married, the Shah family would always support him, not her, without thinking about who is at fault.

Irritated Samar tells Nandini that she finally got brainwashed by Kavya. Baa gets tensed witnessing Samar and Nandini’s argument. On the other hand, Anupama and Anuj get lost in each other while talking. Malvika sees them and thinks that Anupama and Anuj’s love story is very cute and beautiful. She wards off the evil sight from them. At Shah house, Baa gives two sticks to Samar and Nandini. She asks them to fight or argue inside the house, not outside. Samar and Nandini argue even in front of Baa. Baa scolds them and asks them to not get involved in the elder’s fights. Nandini rudely tells Baa that Kavya is lonely and she also taunts Kavya always. This angers Samar and he asks Nandini to talk to Baa with respect.

Argument increases between Samar and Nandini. Baa shouts and asks them to finish off their argument. She tells Nandini that if they would have tried to stop Kavya then the latter would have blamed them for not giving her space. She reminds Nandini that she didn’t support Vanraj when he went away on Diwali. Baa also tells Nandini that the Shah family isn’t ignoring Kavya, it’s just Vanraj. Anupama makes Anuj eat the rasgullas Malvika brought for him. She cleans up Anuj’s mouth with her saree. They get lost in each other. Anupama dreams about spending romantic time with Anuj. Anuj brings Anupama out of her dream world. He asks Anupama, where did she get lost.

Anupama stutters and leaves. Anuj thinks if what he is thinking is really happening. He prays to God to take care this year. Back at Shah house, Nandini tells Baa that Kavya wouldn’t have committed any mistake, if Anupama would have supported her instead of Vanraj. Samar asks Nandini why would Anupama talk in between Vanraj and Kavya? Nandini asks Samar if Anupama can talk between Anuj and Malvika, then why not between Kavya and Vanraj. She reminds Samar that Anupama took the decision to let Malvika stay in the Shah house. Baa says it was the right decision at that time to stop any fights. Nandini asks Baa why are they creating the same situation for Kavya when they saw what Anupama went through seeing Kavya and Vanraj together.

She further asks Baa if they are not saying anything to Malvika because she is Anuj’s sister. Samar asks Nandi why would Anupama help Kavya who made her suffer a lot. On the other hand, Anupama decides to do something to let Anuj and Malvika sort their differences. In the next episode, Anupama will shock the Kapadias by telling them that she is returning to her home. At Shah house, Samar and Nandini will walk separate ways in anger. Anupama will get shocked to hear something on call.

Reviewed Rating for Anupama 14th January 2022 Written Update New trouble: 3/5 This rating is solely based on the opinion of the writer. You may post your own take on the show in the comment section below.