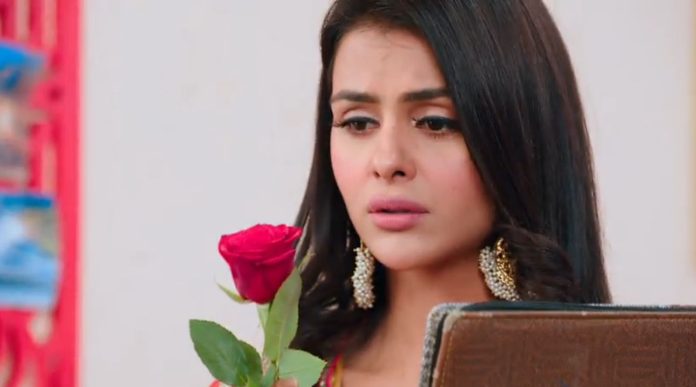 Udaariyaan 14th January 2022 Written Update Tejo’s call Tejo finds Fateh’s gifts in her room. She gets emotional and thinks of her. She doesn’t get angry or dump the rose this time. She decides to keep the rose and the lovely note. Fateh is stepping towards success in winning her heart by his changed behavior. Other side, Fateh comes across a shocking sight when he finds his dad Khushbeer pleading with someone. He grows worried. Meanwhile, Jasmin is left stunned when Rupy walks into her hotel room with the police. Rupy offers her to come home with him if she wants to convince the family her innocence, else choose to go with the police. He puts her into a big fix. Which path will Jasmin choose? Will Fateh succeed in convincing Khushbeer about Buzo and Simran’s alliance? Keep reading.

Earlier in the show, after the trip ends, Fateh and Tejo leave for home. Fateh speaks to Buzo and Simran on the video call and gets the good news that Buzo has convinced his parents for the alliance. He promises to return home and speak to Khushbeer about it. Tejo is glad to see Fateh uniting Buzo and Simran forever. She wants Fateh to think of the family’s betterment first.

Fateh tells Simran that he will convince Khushbeer for the alliance. Tejo overhears their conversation and feels happy for Simran. She tells Fateh that she heard everything and is really glad. She sits with Fateh and asks him to not talk to her. Fateh respects her word, and pleases her. Tejo and Fateh come closer on the return trip. He wishes to win Tejo’s heart soon.

Jasmin makes an interesting and puzzling plan to involve the police in the accident case, which happened for real. Fateh and Tejo come home to Moga. Rupy finds them together. He informs Tejo about Satti’s fears. He takes Tejo home. He is also afraid of Jasmin. He doesn’t know what will Jasmin do next. Fateh also gets scared thinking of Jasmin’s threatening words. He gets picked by the police for some case, and then he is dropped home. Jasmin visits the police station to false testify regarding the accident case. She makes the police more confused. She acts to glorify herself.

Later, Fateh meets Simran and Buzo. He shares his happiness that he had spent one entire day with Tejo. He tells them that he will complete their love story, he will convince Khushbeer and unite them. He stays positive. Rupy tells Satti that he is going to bring Jasmin home some how. He goes to the police station to file a complaint to compel Jasmin to return home. Rupy takes the police to Jasmin’s hotel, but she cleverly changes the game. Rupy fails to take her home. She stays adamant that she will not go home and even gets the law on her side. Rupy helplessly leaves when she threatens him about Tejo.

Fateh tries to convince Khushbeer about Simran and Buzo’s alliance. Khushbeer doesn’t think Buzo is a responsible man who can earn and take care of Simran and Candy. He outright refuses for the alliance. Simran gets disheartened. Fateh doesn’t lose hope. He is sure to convince Khushbeer. Tejo gets a rose from Fateh and accepts it this time. She heads to the college and finds Fateh upset. She asks him the reason of his worry. He tells her that Khushbeer refused to accept Buzo for Simran.

She promises to help in uniting Buzo and Simran. He gets thankful and hopeful that now Khushbeer will agree when Tejo gets involved. Tejo makes a plan of finding a fake alliance for Simran through a marriage bureau, and then bringing Buzo’s alliance in the talks, so that Khushbeer and family accepts Buzo. Fateh really likes her idea. She asks him to get the love marriage arranged by the marriage bureau. Angad finds them together and gets much disappointed. He still thinks Fateh is a fraud who will hurt Tejo’s heart again.

He wants to protect Tejo from Fateh. He meets Jasmin and asks her when will her surprise plan get working. She tells him that she is building up suspense the same way as Fateh did before cheating her and breaking her heart. She asks him to have patience, because he will be winning Tejo in the end. She tells that the families will bring Tejo to Angad and get them married. He is not so sure about her words. He just wants Tejo in his life and feels helpless to tolerate Jasmin.

Reviewed Rating for Udaariyaan 14th January 2022 Written Update Tejo’s call: 3/5 This rating is solely based on the opinion of the writer. You may post your own take on the show in the comment section below.