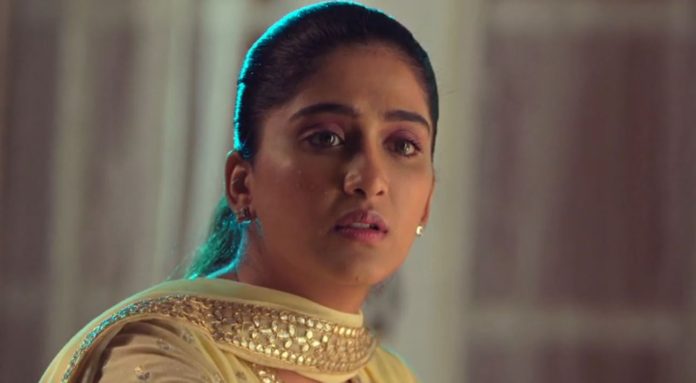 Choti Sarrdaarni 14th January 2022 Written Update Seher’s confession Seher asks Harleen what should Raj be ashamed of. Harleen says Raj’s fault is that he kept standing with a kid near danger. All guests support Harleen. Harleen says that’s why she didn’t want Seher to accept blind Raj. Robbie tells Seher that Raj is a liability. One of the guests asks Seher to see that all the girls are scared. She asks Seher who will marry sons of Gill family if they have a careless son in law in the house. Seher asks everyone who sensed the danger first. Param says Raj. Kulwant asks Harleen to see Raj sensed the danger first. Seher stands for Raj and asks everyone why didn’t anyone else in the party smell the gas.

All the guests regret their mistakes and taunts they gave to Raj. Seher asks everyone to see it was Raj who saved everyone from danger by smelling it. She tells everyone that God opens doors for his/her child in need. She indirectly says that a blind person’s other senses get stronger, which helps him/her to live their life. Gill family’s staff also reveals that it was Raj who alerted them of the gas leak. They further tell everyone that Raj also advised/guided them how to save everyone from the gas leak. Guests feel more regretful towards Raj. They apologize to him.

When Raj and Seher come on stage, girls present in the function thank Raj for saving everyone’s life. They give roses to him and praise him for being a good guy. Seher teases and scolds Raj for taking flowers from other girls. Raj feels good with praises and Seher’s jealousy. Seher announces Karan and Param swayamvar’s start. She tells all the girls present in the swayamvar that they can make her brothers do any task. Param and Karan smile. A girl named Devika Singh Rathore’s entry is announced. She is introduced as the princess of some state. Mrs. Bhalla tells Harleen secretly that she called this royal girl especially for Param. Harleen gets happy that a princess came for Param. Devika sneezes and her father asks the staff to take away marigold flowers as his daughter is allergic to it.

Devika enters with her parents. Mrs. Bhalla tells the guests that Devika studied from Cambridge. Devika’s father tells Seher that he met Sarab once and found him to be a good and noble person. He also apologizes for not being able to attend Sarab’s funeral. Seher, Karan and Param feel proud hearing their parents’ praises. Mrs. Bhalla introduces the royal family to Param. Devika’s father says his daughter is very delicate. He further says he is sure that Param would be able to take care of her as he has Sarab’s values being his blood related son. Devika’s father says blood is blood after all. Seher looks at sad Karan.

Seher tells Devika’s father that she doesn’t agree with his words. She tells Devika’s father that her parents always believed that relationships made from the heart are more valuable than blood relations. Other girls who came for swayamvar raises questions on Devika for arriving late in the swayamvar. They say that it’s not fair for them as they came early and waited for a long time for Swayamvar to commence. Kulwant agrees to the girl’s words. Harleen gets angry and asks girls to respect Devika and her family saying that they are royals. Angry Harleen also asks Kulwant to not interfere here as it’s about Param’s life.

Devika stops everyone from arguing further. She tells everyone that they arrived late because they were serving elders in an old age home. Seher asks everyone to give a chance to Devika as she got late not because she is royal but was serving needy old people. Raj tells guests that he is respectful towards all guests. He further assures everyone that his and Seher’s family won’t let go of anyone’s respect. All girls agree to give Devika a chance. Seher, Raj and everyone gets happy.

Seher says, “I love you” to Raj. She prays that she soon gets a solution for Raj’s blindness and can stop his sufferings. On the other hand, Guruji tells something to one of his devotees. His devotee asks him how it is possible. Guruji asks his devotee if he would question him now. Raj senses that Seher is injured. He feels emotional thinking that Seher is doing so much for him. In the next episode, Seher will announce a question answer round in Param and Karan’s swayamvar. A man will question Karan that how can he ensure them that their daughters will be going in a happy united family. Karan will get nervous. Seher’s condition will be the same.

Reviewed Rating for Choti Sarrdaarni 14th January 2022 Written Update Seher’s confession: 3/5 This rating is solely based on the opinion of the writer. You may post your own take on the show in the comment section below.