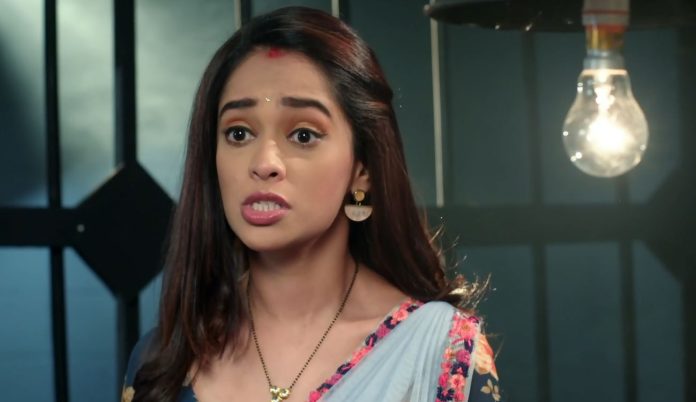 Kumkum Bhagya 17th January 2022 Written Update Prachi strikes Prachi tells that the wrongdoers will get punished. She asserts that whoever has done wrong will bear a punishment, it doesn’t matter who the culprit is, even if its her husband or her sister, she will not spare anyone. She also names Pallavi who has joined hands with Rhea and cheated her so badly by framing her with Siddharth. She recalls the huge deceive of her life when Ranbir broke up with her after losing faith on her character and love. She doesn’t want to forgive anyone who had misused the relations, who had exploited the relations for their selfish motives. She wants to question them and make them pay for their crimes.

She isn’t in a mood to forgive anyone who did wrong with her. On the other hand, Aaliya tells that Rhea means a world to her, she can do anything for her Rhea. She admits her crime that she had put an unconscious Prachi and Siddharth on the bed to make them fall in Ranbir’s eyes. She doesn’t think it was a big deal. Pallavi happens to be at the door when Aaliya accepts her crime. Rhea and Aaliya get tense seeing Pallavi, and thinking the latter has overheard everything. Did Pallavi really overhear their confessions or not? What is Prachi’s plan of strike back? Keep reading.

Earlier in the show, Shahana calls Jai and asks for Ranbir. He tells that he doesn’t know why is Ranbir unreachable. She informs him about Prachi’s arrest. She tells him how Rhea has framed Prachi. She wants his help to rescue Prachi. She tells that Prachi asked her not to take help from Ranbir. He asks her to relax. He calls the driver to find out about Ranbir. He learns that the driver dropped Ranbir at the airport. Jai tells Shahana that Ranbir left for London. He assures that he will speak to Ranbir. Prachi faces an emotional turmoil when she goes behind bars. She regrets to put her baby in risk. She thinks she should have stayed with Sushma, she should have taken help from Ranbir for the sake of her baby. Prachi sheds tears of sorrow.

Prachi apologizes to her baby. She tells the baby that she will not let anything wrong happen with the baby. She asserts that Rhea made a big mistake by sending her to jail, Rhea and everyone who did wrong will get punished. She decides to punish those who make relations for their motives. She wants justice against the relations which aren’t real now. She tells that Rhea and Pallavi didn’t understand the importance of relations and changed her life but they can’t change her fate.

She doesn’t want them to do wrong with her life. She tells that she will punish all the wrongdoers, who had broken the limits and misused the relations. She rages. Jai calls up Ranbir. He isn’t able to connect. He calls the hotel to know about Ranbir. He leaves the urgent message for Ranbir. He drops a message for Ranbir. He tells that Ranbir has many complications in his life. He gets Ranbir’s call. He tells Ranbir that he called to tell him the tricky situation. Ranbir asks him to take a breath and then tell the matter. Jai apologizes for telling the bad news. He tells about Prachi’s arrest. Ranbir can’t believe it. Jai tells him that Shahana called him and informed about the arrest.

Ranbir tells Jai that he is coming back home by leaving his meeting and flight. He doesn’t think anything is important than Prachi. Shahana meets Prachi and informs her that Ranbir had boarded the flight for London. Prachi is shocked to know that he left without telling anyone. She asks Shahana not to call him for help. Shahana asks her to calm down. She tells that Sarita is away, she can’t come to help them, but one person can help them. She asks Prachi to permit her to call that person. Prachi asks Shahana if she is talking about Sushma. She doesn’t want to take Sushma’s help. She tells that Sushma asked her to never return in her life. Shahana tells that there are already many complications.

Prachi tells that Sushma did a lot for Pragya and her. She doesn’t want to give tension to Sushma. Constable asks Shahana to leave, the meeting time is over. Shahana tells that she didn’t finish her conversation. She argues with the police. Inspector asks Shahana to leave and come tomorrow for meeting Prachi. Shahana offers them money. She gets rebuked for bribing them. She asks them to put her inside the cell for the crime. Shahana also gets locked up with Prachi. Prachi apologizes on Shahana’s behalf. Shahana tells that she loves Prachi a lot, she will be with her. Prachi hugs her.

Meanwhile, Rhea is disturbed thinking Prachi will return. She gets angry recalling the latter’s challenge. Aaliya finds her angered and asks the reason. She tells that Prachi has left. Rhea tells that Prachi has challenged her that Ranbir is of her. Aaliya asks her not to think of Rhea. Rhea tells that she is just seeing Prachi everywhere, Prachi always snatches everything from her. He cries that Prachi ruined her life’s beautiful moments. She tells that she will celebrate Lohri today itself, she will burn Prachi’s stuff in the Lohri fire. Aaliya asks her to calm down. Ranbir panics and asks Jai to bail out Prachi.

Jai tells him that the bail can’t happen at night. Ranbir wants a return flight. He tells that Prachi needs him, she is in the lockup. He feels guilty that he left Prachi alone in Rhea’s company, knowing Rhea will not spare Prachi. Rhea gathers Prachi’s stuff to burn it. Aaliya tells her that she is proud of her. Rhea tells that they have worked hard to make Prachi out of Ranbir’s life. Maid informs Pallavi about Rhea’s move. Pallavi tells that Rhea is doing wrong. She goes to stop Rhea. Aaliya tells Rhea that it was not a big deal to put Prachi and Siddharth on the hotel room bed. Rhea asks her how did she find the lookalikes there to trick Ranbir. Aaliya and Rhea share their confessions. Rhea tells that she has seen Pallavi’s hatred for Prachi, it helped her a lot. Aaliya feels Ranbir still loves Prachi.

Rhea also knows this well. She admits that she gets tensed seeing Ranbir and Prachi together, but now the situation has changed, Ranbir isn’t supporting Prachi like before, their relation broke, their connection will also break when Prachi gets out of his sight. She tells that Prachi did the mistake this time and landed in jail. She calls Prachi a big fool. She tells Aaliya that Prachi was planning to oust her. Aaliya asks her not to talk about Prachi and Siddharth from now on. Rhea asks if she is feeling bad for them. Aaliya tells that they have to pay the actors who posed as fake Sid and Prachi in the hotel. They receive a shock on seeing Pallavi at the door.

Reviewed Rating for Kumkum Bhagya 17th January 2022 Written Update Prachi strikes: 4/5 This rating is solely based on the opinion of the writer. You may post your own take on the show in the comment section below.