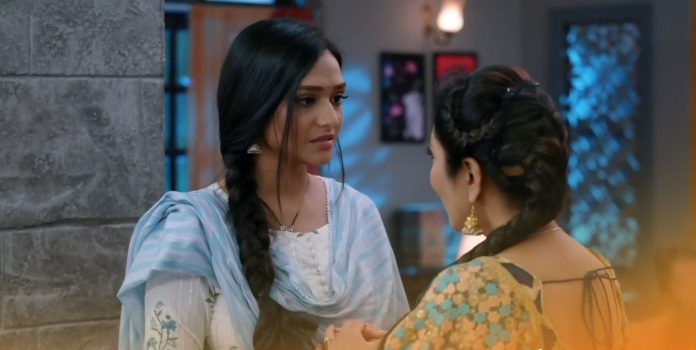 Bhagya Lakshmi 17th January 2022 Written Update Awful Rishi and Lakshmi meet in the lift. She avoids him, while he tries to talk to her. Ayush meets Shalu and apologizes, but she lectures him a lot about Rishi’s cheat. She tells that Ayush knew about his brother’s affair and kept it a secret, even he has cheated Lakshmi. She asks if he can sense the trauma what Lakshmi is going through. Bani asks Lakshmi if she will go back to Rishi if he apologizes to her from his heart. Lakshmi doesn’t think she can forgive Rishi, though she misses him every moment.

Rishi also confesses to Ayush that he is missing his best friend, Lakshmi a lot. He praises Lakshmi who is a really sweet girl. He tells that anyone can fall in love with Lakshmi. Ayush questions him if he didn’t fall in love with Lakshmi then. Rishi is speechless. Rano hears Lakshmi and her sisters’ talks. She tells Lakshmi that even she hates Rishi after his aberration. Rano plays an evil plan with Lakshmi. She asks Lakshmi why does she want to keep a relation with Rishi when she doesn’t want to return to Oberoi house.

She asks Lakshmi to divorce Rishi. Lakshmi gets back in shock. Rano sympathizes with her. She pretends to be too concerned for Lakshmi. Lakshmi refuses to divorce Rishi. Rano doesn’t stop her plans. She makes the divorce documents. She heads to Lakshmi, who sleeps with her sisters. Rano takes the stamp ink. She takes Lakshmi’s thumb impression on the divorce documents. She quickly leaves before Lakshmi sees her. Rano will tell Lakshmi that Rishi has sent the divorce papers, he wants divorce from her, because he wants to marry Malishka. Also, Rano will lie to Oberois that Lakshmi wants the divorce and mislead them.

Lakshmi sees Rishi walking inside the lift. She hides behind someone. The person sneezes and gets aside. Rishi turns and sees Lakshmi, while a sad song plays in the background. Rishi tries to talk to Lakshmi. She gets down the lift and leaves. Rishi gets late because of the crowd. He asks her to listen to him once. She doesn’t want to think of Rishi again. He runs to look for her. Shalu checks Rishi’s missed call. Bani asks her to talk nicely and not scold him. Shalu tells that she can’t do any fake acting. She thinks Rishi called her when Lakshmi didn’t answer his call.

Bani asks her to better not call. Shalu tells that Lakshmi’s trust broke this time, she can tolerate anything, but not cheat, she can never forgive Rishi. Ayush arrives there to meet Lakshmi. He wants to talk to her once and apologize. He doesn’t think he should wait for her for long. Shalu meets him. He apologizes to her, but she angrily lectures him, blaming him along with Rishi for the deceive. She asks him why didn’t he tell the truth to Lakshmi. She adds that she was happy that Lakshmi was getting a good family, but the Oberois have proved her fear true.

He tells that Virender isn’t involved in this mess. He adds that he supported Virender a lot, they both tried to keep Rishi and Lakshmi united, but the situation changed and turned them helpless. Shalu tells that Rishi has done wrong by marrying Malishka. She feels Lakshmi deserved to know the truth. She asks if Rishi had lied to Lakshmi and lived with her. She doesn’t want to meet Rishi ever. Rishi searches for Lakshmi, who enters a law firm for the interview. Lakshmi collides with Rishi’s friend. Rishi also collides with the same person. He tells that he was looking for Lakshmi. His friend asks Rishi if he has come to buy the office.

Rishi asks him to give him two minutes. Ayush understands Shalu’s emotions. He tells that he would have blasted his anger on Rishi, if he was in her place. Shalu tells that even she was angry, but Lakshmi stopped her from scolding Rishi, who doesn’t deserve her at all. He tells that he just wanted to see Lakshmi and know if she is okay. He adds that Virender is shattered after Lakshmi left the house, Neelam and Virender slapped Rishi and punished him for the wrong, Virender just wants to know if Lakshmi is okay. He knows that their mistake can never get justified, they did wrong with Lakshmi, they will never get clean of their actions. He asks Shalu to tell him once about Lakshmi. Shalu doesn’t answer him.

Reviewed Rating for Bhagya Lakshmi 17th January 2022 Written Update Awful: 4/5 This rating is solely based on the opinion of the writer. You may post your own take on the show in the comment section below.