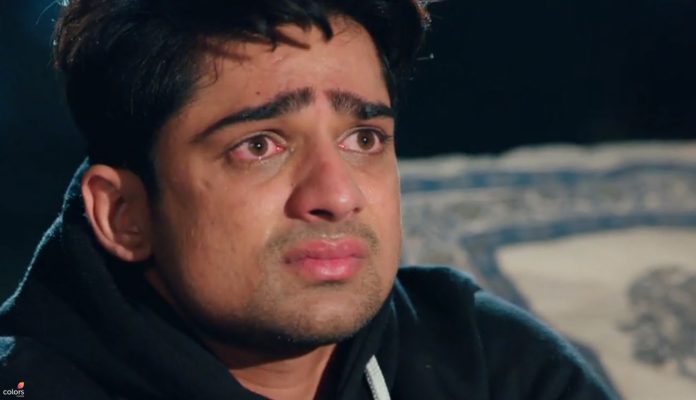 Udaariyaan 16th January 2022 Written Update Amrik’s entry Jasmin’s surprise finally gets revealed. She plans to shock Fateh and Tejo by using Amrik, who has come on her side now, after all she had framed him in a fake accident case and then saved him from the law. Jasmin gets into Amrik’s good books and wins his heart by becoming his savior. He doesn’t know that she had planned that fake accident to malign his future. Amrik gets super scared after his stay in the jail. He wasn’t in contact with the family. He couldn’t tell them about the sufferings he is facing.

Amrik falls into Jasmin’s trap, while the Virks are unaware of his problems. Jasmin plans to get an entry in Virk house by employing Amrik in her plans. Jasmin counts her favor on Amrik, that she saved his life and also his future. Amrik gets inconsolable when Jasmin lends a shoulder to him. On the other hand, Fateh and Tejo try to help Simran and Buzo unite by getting their marriage fixed. Things don’t go as planned, because Khushbeer and Buzo’s dad get into a heated argument when they meet for the alliance talk. Khushbeer doesn’t want to accept jobless Buzo, while Buzo’s parents comment on Simran for being a divorcee and bearing a child already.

The family clashes get more. Fateh gets worried seeing the matter go out of his hands. He decides to call Tejo home for calming down Khushbeer. He thinks only Tejo can handle the mess now. Khushbeer tells that he will never accept the useless Buzo. Buzo’s dad rejects Simran’s alliance before Khushbeer rejects Buzo. Jasmin tells that she will train Amrik for her plans and then use him as a destructive weapon to destroy Fateh and Tejo’s lives. Will Tejo arrive in Virk house to sort down Simran’s marriage mess? Keep reading.

Fateh arranges a meeting of Virk family with Buzo’s Jindal family. Fateh wishes the alliance talks to bear fruit, but the situation starts going out of control when Buzo walks in and leaves Khushbeer upset. Khushbeer is already in a bad mood, and feels worse when he sees Buzo. He doesn’t give a good welcome to Buzo and insults him for coming for marriage. Buzo’s dad Jindal doesn’t accept the insulting remarks on his son. He tells Khushbeer that he will not tolerate anything against his son, because his son has a big heart to marry Simran, who is already left by her husband.

Jindal insults Simran as an answer to Khushbeer’s taunts on Buzo. Buzo and Simran get worried seeing their dads arguing so much. Khushbeer faces a real bad time when Jindal insults him over his daughter’s mistakes. Jindal tells that Khushbeer has lost his MLA position, but he is still egoistic. He tells that he is doing a big favor by getting Buzo married to Simran, else the girl will never get anyone of her age for marriage. Khushbeer gets to hear worse taunts when the verbal sparks start hitting both the families. Fateh and Buzo try to calm the arguments, but in vain. Khushbeer gets too disappointed.

He asks Jindal to leave from his house. Jindal calls off the alliance talks for once and all, breaking Buzo and Simran’s union hopes. Fateh fails in his attempt. Simran sheds tears of sorrow. Tejo wishes everything goes fine at Virk house. She prays for Simran and Buzo’s marriage. Fateh informs her the outcome of the meeting. He asks Tejo to make some other plan to convince Khushbeer for accepting Buzo. On the other hand, Amrik sinks in guilt over the accident. He doesn’t eat food. He stays in his guilt zone, and Jasmin takes an advantage of him. Jasmin wants Amrik to trust her like before when she had befriended him. She tells him that she will never let anything wrong happen with him.

Khushbeer reprimands Simran and Fateh, since they both have ruined his public image and reputation. He asks Gurpreet to take care of Mahi and Amrik if she wants her husband to stay alive. He feels fed up of the defamation his children caused to him. Jasmin keeps a good image in front of Amrik, who is scared of the law punishment once his crime gets proved. She further scares him that his entire life will be spent in life or he will be hanged to death. She then tells him that she has bailed him out to help him, like he used to help her before. She takes care of him for her motives.

Amrik thinks she is genuinely concerned for him. He asks her why is she helping him when she hates his family. She tells him that she doesn’t hate him and she is still his friend. He tells her that she is really nice, unlike the image she has formed in everyone’s eyes. She asks him not to overthink and just relax. She hides her motives from Amrik. She just wants to use him for her big surprise for Fateh. Meanwhile, Angad finds Tejo worried. He offers to drop her home, but she refuses. He asks her the reason for her tensed face. She doesn’t tell him about Simran.

She rushes to meet Fateh on his call, which leaves Angad angered. Angad finds Tejo and Fateh close to union, and doesn’t want to wait for Jasmin’s surprise to get into action. He thinks its time that he also launches his surprise plan for Tejo. He plans to take an alliance for Tejo at her home and convince Rupy for it. Fateh tells Tejo about Khushbeer and Jindal’s fight. He asks her to find some way out. She promises to sort the matter. She takes Candy along and meets Khushbeer. Candy tells Khushbeer that he prayed to make Buzo his dad. Tejo tries making Khushbeer understand Candy’s wish.

Khushbeer finds Simran and Buzo’s secret meet. He overhears them and finds Simran keeping his respect by refusing to marry Buzo. Simran doesn’t want to meet Buzo again at the cost of Khushbeer’s happiness. Tejo meets Fateh and Buzo, and asks them to not hurt Khushbeer’s sentiments. She tells that Buzo shouldn’t have gone home to meet Simran. Buzo tells that he feels like losing Simran now, he can’t keep more patience. Next day, Tejo meets Khushbeer and apologizes for her planning to unite Simran and Buzo. She asks him to fulfill Candy’s wish and accept Buzo for Simran. She also alerts him that Simran may go against the family and marry Buzo for her son’s sake, then the family will lose Simran again. Khushbeer isn’t scared of losing Simran. Tejo tries hard to convince him some way.

Reviewed Rating for Udaariyaan 16th January 2022 Written Update Amrik’s entry: 3/5 This rating is solely based on the opinion of the writer. You may post your own take on the show in the comment section below.