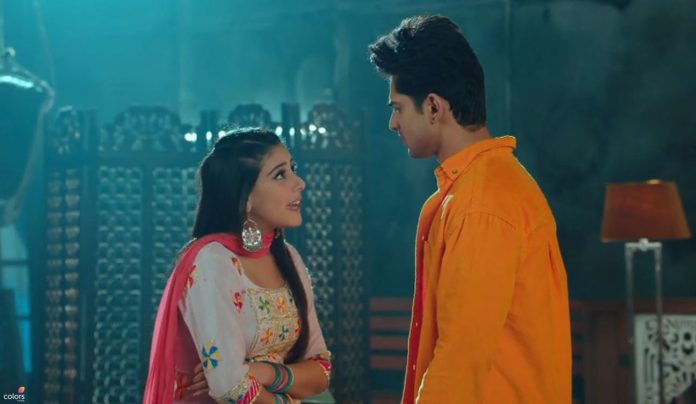 Udaariyaan 17th January 2022 Written Update Jasmin’s condition Fateh drops Tejo home. He asks her if he shall see a day when she forgives him for his mistakes. Tejo responds to him with a smile, which makes him realize that his victory is close. He gets hopeful that Tejo will soon forgive him. Tejo and Fateh both have dreams of their union. On the other hand, Jasmin has dreams of destructing them. She presents her true intentions to Amrik. She tells him that she got him bailed out for her own motives. She threatens of getting him arrested if he dares to refuse to her condition. She asks him to team up with her and do as she tells him, if he wants to get saved from the blame. Will Jasmin keep the condition of marriage in front of Amrik to get an entry in Virk house and ruin down Fateh? Keep reading.

Khushbeer finds Simran and Buzo’s secret meet. He overhears them and finds Simran keeping his respect by refusing to marry Buzo. Simran doesn’t want to meet Buzo again at the cost of Khushbeer’s happiness. Tejo meets Fateh and Buzo, and asks them to not hurt Khushbeer’s sentiments. She tells that Buzo shouldn’t have gone home to meet Simran. Buzo tells that he feels like losing Simran now, he can’t keep more patience.

Next day, Tejo meets Khushbeer and apologizes for her planning to unite Simran and Buzo. She asks him to fulfill Candy’s wish and accept Buzo for Simran. She also alerts him that Simran may go against the family and marry Buzo for her son’s sake, then the family will lose Simran again. Khushbeer isn’t scared of losing Simran. Tejo tries hard to convince him some way.

Tejo explains Khushbeer that he should forgive Simran and make her future bright with Buzo. She tells that Buzo stood by Simran when none of the family members knew about her, Buzo is a kind hearted person who has always supported Simran, even when he knew about her past and Candy, his love for Simran didn’t change. She asks Khushbeer to realize Buzo’s good virtues than his flaws. She tells that only Buzo is perfect for Simran, they both love each other and deserve a right to live together. She tells that once he forgives Simran, everything will get easy.

He tells them that Tejo has opened his eyes, he has come to apologize and fix Simran and Buzo’s marriage. He makes a hearty apology and hugs Buzo. He tells Buzo that he never understand his real worth and is really sorry. Buzo and his parents forget the past and forgive him. They agree for the alliance. Buzo and Simran get very happy that their marriage is going to happen. Their families are also happy. Fateh thanks Tejo for convincing Khushbeer and getting things done with ease. Khushbeer blesses Tejo for bringing happiness. The family misses Amrik and think he is at work. Amrik thanks Jasmin for helping him. He regrets that his family regards her wrong. She expresses her real intentions to him.

She asks him to not judge her so soon. She tells that he shall not make a good opinion about her, because the earlier bad opinion was right. She admits that she saved him for her own personal motives. She shocks Amrik by threatening him. She asks him to obey her instructions and just do as she tells him, else he will land in the jail again. Amrik cries when she starts manipulating him for her gains. He falls helpless to agree to her condition.

Jasmin tells him that she has saved him from getting arrested that night when he was listening to loud music and driving, without realizing that a man came in front of his car. Amrik remembers the accident and also Jasmin’s help, when she saved him from the police. She tells him that he wasn’t lucky enough that day when someone informed the police about him, but she had come to bail him out, and now he will help her in taking revenge on Fateh and his family. She tells that she wants revenge on Virks who insulted her all the time and only supported Tejo. She asks Amrik to not go against her, else he will invite problems for himself. Amrik is really in a terrible state. He abjures to her demand.

On the other hand, Fateh asks Tejo if she will forgive him some day. She smiles and he gets glad. Gurpreet is worried for Amrik and Fateh. Simran tells about Fateh’s boxing match which will make him gain his lost confidence back. She tells that they shall prepare a feast for Fateh who would win the match and come. Gurpreet asks Khushbeer to mend his terms with Rupy, who are close to them. Khushbeer doesn’t listen to her. Gurpreet and Tejo meet Satti and try to find a way to unite Rupy and Khushbeer.

Gurpreet is thankful to Tejo for uniting Simran and Buzo. Jasmin gets surprised to see Angad at her place. He asks her about the surprise not reaping anything. She tells him that she is ready to get her plan into action. Angad tells that he can’t see Tejo forgiving Fateh and uniting with him. She asks him to have patience, because she is going to surprise the Virks.

Reviewed Rating for Udaariyaan 17th January 2022 Written Update Jasmin’s condition: 3/5 This rating is solely based on the opinion of the writer. You may post your own take on the show in the comment section below.