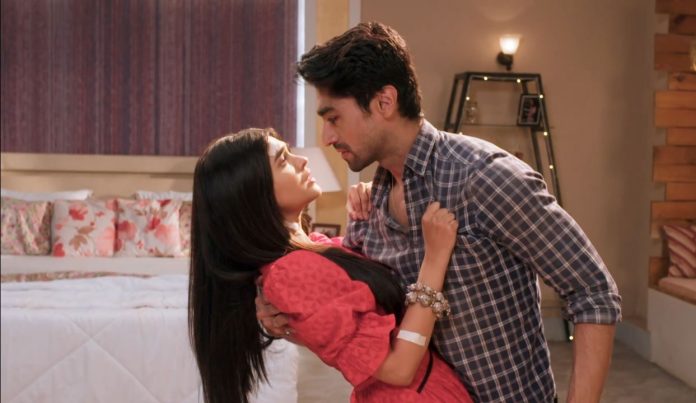 Yeh Rishta 19th January 2022 Written Update Wedding twist Abhimanyu finally learns the truth about Akshara. He tries to recall the fire incident when he felt Akshara’s touch, but didn’t understand the truth because of Aarohi’s lie. He wasn’t in a zone to believe his senses that time. He cries thinking of the incident when Akshara risked her life and put all her strength to save his life from the fire. He falls in love with Akshara once again knowing the favor she did on him that day. He doesn’t understand why is she staying silent about her feelings, knowing Aarohi is cleanly lying to the family. Neil asks him to just seek an answer from Aarohi about her lie.

He suspects that Aarohi would have lied to them even more. Akshara wants to take a step for the truth. She returns home in time before the family elders catch her lie. Aarohi reaches the venue for her exam, and learns that the admission agent duped her for money by giving her a wrong exam date and details. She regrets that she believed him and came to give the exam, by risking her marriage and her relation with Abhimanyu. She is shattered with the thought that she will miss her marriage too. She didn’t wish to look inferior to Mahima. She holds on her frustration and returns back to the city to rush for her marriage.

She hopes Akshara manages everything in her absence. Neil advises Abhimanyu not to worry for Manjiri, when he got to know about Aarohi’s big lie. He tells that Abhimanyu and Akshara love each other and deserve to get married. He asks Abhimanyu to question Aarohi about her manipulative stories. Abhimanyu wants to question Akshara who is his love. He tells Neil that Aarohi means nothing to him, he just wants an answer from Akshara. He tells that Akshara saved him and still kept the truth to herself, she supported her sister’s lies and did injustice with their love. He tells Neil that Akshara should have not done this. He wants to question her unfair attitude towards his love. Akshara sneaks into the house secretly. She hides from the family.

Later, she pretends to be at home. She tells Kairav that Aarohi and she returned home long time back. Kairav tells that he didn’t realize when she had come. He wants to see Aarohi in the bridal getup. Akshara tries to stop Kairav from catching her lie. Abhimanyu ignores Harsh and Anand when they ask him where is he going on his marriage day. Abhimanyu wants to meet Akshara and seek her reply on his proposal. He tells Harsh that he has left a message for Manjiri. Harsh asks him to get serious about his marriage. Abhimanyu wants to clear the matter with Akshara first. He doesn’t reply the family and leaves to reach Goenka mansion in time.

Oddly, he doesn’t get his bike or car for the transport. He chooses to run to Akshara when his bike doesn’t start. Harsh suspects that Neil has brainwashed Abhimanyu and made him flee from the marriage. He vents anger on Neil but Anand comes to his rescue. Akshara feels sorry to lie to the family because of Aarohi. She gets convincing in her lies, but feels really sorry that she is hurting her own family. She can’t hurt Aarohi by breaking her trust. She wishes Aarohi comes back home in time before the marriage. Abhimanyu hates lies. He wants to find the truth some way. Aarohi feels the pain of her broken dreams. She doesn’t want to lose Abhimanyu.

Meanwhile, Neil asks Harsh to wait until Abhimanyu comes back and answers him. Akshara awaits Aarohi, who is still too far from the home. Abhimanyu’s love is like a worship for him. He doesn’t want to lose his love at any cost. He barges into Goenka mansion to reach Akshara. Abhimanyu’s sudden and unpredictable arrival stops Akshara’s breath. She senses that Abhimanyu has come home. She tries to clear her feelings. Abhimanyu gets lucky when nobody in the Goenka house sees him going to Akshara’s room. Akshara saves Abhimanyu from coming in anyone’s sight. He doesn’t know her room. He stops when he reaches the corridor. He follows his heart to reach the right door.

Following her heart, Akshara opens the door for him. They both have an emotional moment. She can’t see him in pain. They have the strong love connecting their hearts. He wants to tell her that he just loves her, she is the one who has touched his heart, who resides in his heart. Akshara and Abhimanyu convey their emotion by their expressive eyes, filled with tears. She questions him the reason for his visit. In a moment, she falls into his arms and loses herself in his eyes. Abhimanyu gives her an ultimatum and asks her to confess love to him if she wants to see him alive. Akshara gets helplessly broken and confesses her love to Abhimanyu. Abhimanyu gets the love confession made his way. What’s next now? What twist will come in the marriage? Look ahead for the huge drama coming up and keep reading here.

Reviewed Rating for Yeh Rishta 19th January 2022 Written Update Wedding twist: 5/5 This rating is solely based on the opinion of the writer. You may post your own take on the show in the comment section below.