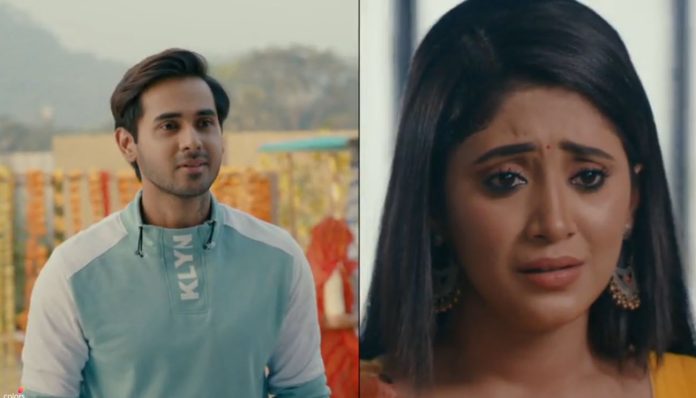 His words shocks Bhairavi and Diya. Anandi hears a sound and thinks it can be Jigar. She prepares to beat Jigar. Anand scares Anandi from behind. Anandi scolds him for doing it. She asks Anand why he came to meet her when Bhairavi asked him not to. Anand asks Anandi to leave this matter. Anandi tells Anand that she is already worried and asks him to not worry her more. She asks Anand if he got any proof for the case. Anand tells Anandi that he didn’t get any proof. Anandi feels bad. Aannd asks her to become Jigar’s friend to solve her problem. Anandi cries more. Anand stops Anandi from crying and shows her her child marriage video. Anand explains to Anandi that her marriage occurred on a moving truck, which is not allowed. He says marriages can’t occur on moving vehicles as per the law. Anandi makes Anandi happy by telling her that this way her child marriage can get null and void.

Anandi gets a little relaxed. Anand tells Anandi how he get her child marriage video. He further tells Anandi that he felt a mother like figure in Sheila. Anand at last tells Anandi that Shiela’s friend got ready to give a statement in court in her favor. Anandi jumps in joy hearing this. Flashback shows how Sheila convinced her friend to help Anand as he loves Anandi. Flashback also shows that Anand told Sheila’s friend (Gauri) that he will come to pick her up on the day of court hearing. Anandi asks Anand to tell her what she can do in return for his help. She says she would do anything. Anand proposes Anandi. He tells her that he loves her. Anand confesses his feelings towards her. Anandi is seen shocked with the proposal.

Anand reaches Devgarh to pick up Gauri. Gauri gets scared and refuses to give a statement. Sheil tries to convince Gauri. Gauri gets convinced and asks Sheila to come with her. Anand requests Sheila to come. Sheila gets ready. Jigar overhears their conversation. He does something with Anand’s car secretly and smirks. On the other hand, Anandi reached court the next morning. She calls Anand and asks him if he picked up a witness. Anand replies that he is on his way with Gauri. Usha asks Anandi if she brought a witness. Anandi tells Usha that Anand went to pick up the witness. Usha confirms from Anandi that a witness will surely arrive. Anandi says yes. Usha apologizes and tells Anandi that she is repeatedly questioning her because of what happened in the last hearing.

Jigar comes and tells Anandi that she won’t win. He tells Anandi that he won’t get freedom from him easily. Anandi gets angry and Jigar smirks. Usha tells Anandi that the Judge won’t give them time this time. Anandi things where Anandi got stuck. Bhairavi and Mehul enter the courtroom. Mehul asks Bhairavi why she came to the court with him. Bhairavi tells Mehul that she came for Anand. She says she knows that Anand would surely reach court to help Anandi. On the other side Anand’s car breaks down. He gets tense thinking how he will help Anandi now. In the courtroom, Bhairavi feels tensed and asks Mehul what will happen if Jigar will reveal Anand’s real mother’s truth to him. She says Jigar may get frustrated after losing the case and blurt out the truth.

Judge comes and Usha asks Anandi to call Anand and ask him where he got stuck with witnesses. Judge asks Anandi if her call is more important to her than her case. Usha tells the Judge that their witness didn’t reach court till now. Judge gets angry and tells Usha that this time the court will not wait for her witnesses. She asks Usha to start the case with whatever they have. Jigar feels happy.

In the next episode, Anandi will be seen twirling around in happiness. Anand proposes Anandi at a beautiful and decorated place. Anandi will be surprised with Anand’s proposal. Angry Jigar will come and start fighting with Anand. Jigar will fall on an open wire in the fight. Anand and Anandi will get shocked seeing Jigar facing an electric current shock.

Reviewed Rating for Balika Vadhu 20th January 2022 Written Update Anand proposes Anandi: 5/5 This rating is solely based on the opinion of the writer. You may post your own take on the show in the comment section below.