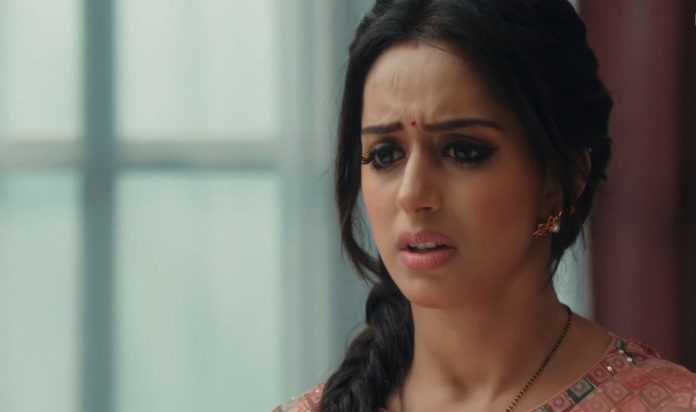 Yeh Hai Chahatein 22nd January 2022 Written Update Prisha answers Prisha asks God why he/she brought Rudra in front of her after 5 years and that too when he is married to someone else. She says that she was ready to tell Rudra the whole truth about her and Ruhi. Prisha asks God why Rudra married Vaijayanti who is her sister. She thinks she can’t return to Rudra after knowing such a big truth. Prisha thinks that Rudra’s life has no space for her and Ruhi. She decides to leave from Rohtak with Ruhi, somewhere where Rudra won’t be able to find her ever.

Vaijayanti asks Bunty how he can let Rudra get so injured being his friend. Bunty tells Vaijayanti that it was just an accident. He says he can’t be with Rudra forever. Vaijayanti asks Bunty what about Prisha. She asks Bunty to honestly tell her if Prisha is alive. Bunty asks Vaijayanti if Prisha would have been alive, would she have left Rudra alone like this. He says Prisha would never leave Rudra alone in this condition as she loves him more than herself. Bunty leaves requesting Vaijayanti to forget about Prisha for everyone’s betterment. Bunty thinks that Rudra is alive because of Prisha only. He further thinks that it’s Prisha’s love that she is leaving Rudra for his good future.

Ruhi asks Prisha why they are leaving Rohtak. Prisha asks Ruhi to do what she says. Next morning, Vaijayanti is seen sitting beside Rudra. Bunty gives Rudra’s medicines to Vaijayanti. He asks her about Rudra’s health. Vaijayanti tells Bunty that Rudra is fine and the nurse said that he will soon gain consciousness. Bunty asks Vaijayanti if she informed Sharda about Rudra. Vaijayanti says Sharda is on her way to Rohtak. Bunty thinks to meet Ruhi as Rudra would surely ask about her after gaining consciousness. He goes to Ruhi’s ward and gets to know that Prisha left the hospital with Ruhi. Bunty reaches Prisha’s home and asks her if Ruhi is fine. Prisha replies that Ruhi is fine.

Bunty sees Prisha packing her stuff and asks her where she is going. Prisha says that she is taking Ruhi away from Rohtak as it would be better for everyone. Bunty asks Prisha why can’t she tell the truth to Rudra and return to his life forever. He further asks Prisha to understand that her return would be better for everyone. Prisha asks Bunty why he didn’t tell her that Rudra married her sister Vaijayanti. She says that she can’t come in between Rudra and Vaijayanti’s family life. Bunty tries to explain Prisha, the reality of Vaijayanti and Rudra’s marriage. Prisha refuses to listen to anything.

Prisha requests Bunty to make Rudra believe that he didn’t see Prisha but Priya Sharma, Ruhi’s mother. She requests Bunty to make Rudra believe that he was remembering Prisha in pain and that’s why hallucinated Prisha in Priya. She continuously requests Bunty to do what she said. Bunty leaves Prisha’s home dejected as Prisha refuses to listen to his words. Rudra gains consciousness in the hospital. Sharda caresses Rudra. She asks him why he was not returning. Vaijayanti asks how he got stuck in fire. Rudra asks where Prisha is.

Bunty asks Rudra to believe that Prisha isn’t alive. Rudra asks Bunty to not lie anymore saying that he got faint in Prisha’s arms only. Rudra’s words shocks Sharda and Vaijayanti. Bunty tries to make Rudra believe that he saw Ruhi’s mother Priya not Prisha. He tells Rudra that he is misunderstanding everything. Rudra asks Bunty where is Ruhi’s mother. Bunty replies that Ruhi’s mother is leaving Rohtak with Ruhi. Rudra says Ruhi told him that the bangle he has is of her mother. He says that he really saw Prisha. Rudra refuses to believe Bunty’s words. He leaves his ward to meet Ruhi’s mother. Sharda, Vaijayanti and Bunty get worried about Rudra’s condition.

On the other hand, Prisha tells villagers her reasons for leaving Rohtak. She tells them that it’s good for Ruhi’s safety. Ruhi requests Prisha to not take her away from Saanchi. Saanchi and Ruhi hug each other. Ruhi promises to Prisha that she won’t lie to her ever. Prisha explains to Ruhi that her name can come in between if the media will come and question them about Rudra. She apologizes to Ruhi and requests her to understand her point. Ruhi and Saanchi cry. Veena hugs Prisha. Saanchi wipes Ruhi’s tears. In her thoughts Prisha apologizes to Rudra for taking Ruhi away from him once again.

Saanchi and Ruhi hug each other once again. Villagers see off Ruhi and Prisha in a cab. Rudra finds Prisha and Ruhi’s home locked. He sees Saanchi and runs behind her. Saanchi tells Rudra that Ruhi and Prisha left Rohtak. Rudra asks Saanchi where Ruhi and her mother went. Saanchi says she doesn’t know but Veena may be aware about it. Rudra reaches Veena and tells her that Priya is his wife Prisha Khurana. He asks her where Prisha and Ruhi left. Veena replies that Prisha had to leave Rohtak because of him. Rudra requests Veena to please tell him where Prisha and Ruhi went. Veena tells Rudra that Prisha is leaving within 15 minutes for Shimla from the bus stand. Rudra runs to reach Prisha and Ruhi.

On the other hand, Vaijayanti tells Sharda that she tried hard to become Rudra’s good wife but Rudra didn’t look at her once. She cries saying that now no hope is left. Vaijayanti says she can’t become Prisha and can’t even compete with her. She further says that she couldn’t get closer to Rudra even in Prisha’s absence. Vaijayanti cries and asks Sharda what will happen to her if Prisha is alive. Sharda tells Vaijayanti that she can understand her. She says it will be good news for them if Prisha is alive. Shayra explains to Vaijayanti that Rudra can’t give her anything ever as his love is only Prisha since the beginning. Vaijayanti feels bad.

At the bus stand, Rudra gets to know that all buses to Shimla have left. Another man tells Rudra that Shimla’s last bus got late. He shows Rudra Shimla’s last bus leaving in front of them. Rudra thanks the man and runs behind the last bus of Shimla. The bus stops and the conductor asks him why he stopped the bus. Rudra gets on the bus and fails to find Prisha and Ruhi. He gets down dejected. He wonders if Prisha is really Ruhi’s mother, saying that he can feel it. Rudra wonders if he lost Prisha once again.

In the next episode, Rudra will find Prisha. He will ask her why she didn’t return to him if she was alive. Prisha will tell Rudra that she didn’t have any option. Rudra will ask Prisha if Ruhi is his daughter. Yuvraj will come and say that Ruhi is his and Prisha’s daughter. On the other hand, Bunty will tell Vaijayanti and Sharda that Prisha is alive. Both of them will get shocked. Angry Rudra will ask Prisha to tell him that Yuvraj is lying as he would kill him. Prisha will tell Rudra something about Ruhi. Yuvraj will look on tense.

Reviewed Rating for Udaariyaan 21st January 2022 Written Update Tejo confronts Jasmin: 3/5 This rating is solely based on the opinion of the writer. You may post your own take on the show in the comment section below.