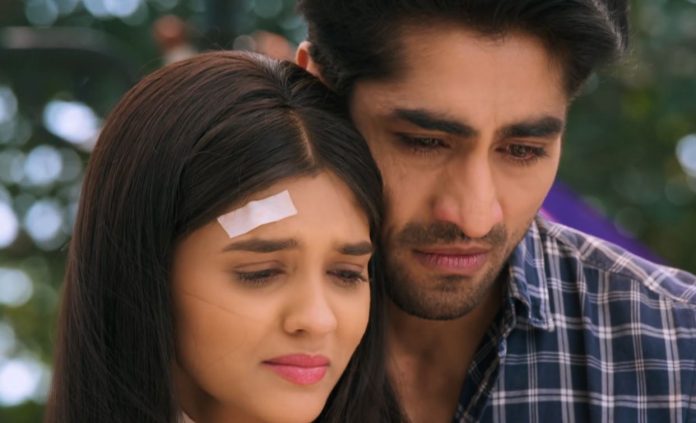 Harshvardhan tells Manjiri that her upbringing would be questioned. He says to Manjiri that they forgave all her mistakes till now but nobody will ever be able to forgive her for this big mistake. Manjiri tries to make a call, Harshvardhan thinks Manjiri understood his point. Harshvardhan further thinks that now Abhimanyu will return by listening to Manjiri. He decides to take Abhimanyu’s baraat to Goenka Mansion. On the other hand, Abhimanyu and Akshara caress each other and leave towards Goenka Mansion together. At Goenka Mansion, Goenkas are seen making Aarohi lit a diya in their house temple. “Son Chiraiya Ab Toh Udne Wali Hai” plays in the background.

Suhasini explains to Aarohi that now she will have another house. They tell her that she will have to consider and accept Birlas as her own family. Swarna explains to Aarohi that she would get a new mother in Manjiri. Manish wishes that Aarohi remains happy wherever she goes. Aarohi hugs the whole Goenkas family. Everyone wonders where Akshara is. Aarohi worries about trouble ahead with Akshara being missing. Someone announces that baarat came. Except Aarohi everyone leaves to welcome Birlas/Baraaties. Birlas come out of their cars. Goenkas searches for Abhimanyu in between all the Birlas. They wonder what is happening seeing Birlas worried and upset.

Abhimanyu takes Akshara with him. On the other hand, Aarohi worries about Akshara’s whereabouts knowing that she missed her call. She tries to call Akshara but the latter doesn’t pick up. Aarohi thinks that Akshar may be outside busy with baraat. Akshara and Abhimanyu climb the temple’s stairs together. Birlas fold hands in front of Goenkas and look down. Manish stops the band. Aarohi wonders why the band’s music stopped. She thinks that she gets scared with little after past issues. Aarohi hopes her marriage will happen perfectly. Akshara recalls Aarohi’s words when the latter asked the former to not come in between Abhimanyu and her. She feels guilty without being at fault.

On the other hand, Goenkas asks Birlas what is happening. Kairav asks Birlas where Abhimanyu is. Manjiri recalls talking to Abhimanyu on call. Flashback shows that Abhimanyu told Manjiri that Akshara is with her. He also told her that he and Akshara love each other a lot. Abhimanyu asked Manjiri if his decision would be right or not. Manjiri asked Abhimanyu to put the phone on speaker. She told Akshara and Abhimanyu that she understands love and both of them. Manjiri also told Akshara and Abhimanyu that she will always support them in their decisions. She asked them to not ignore their family in the process to fulfill their love. Neil was also seen with Manjiri in all this. Flashback ends.

Anand tells Goenkas that his family won’t be able to answer their questions about whatever happened presently. Aarohi leaves her room to see what is happening outside. Akshara and Abhimanyu recall Manjiri’s advice. She also recalls her family moment. Akshara and Abhimanyu recall whatever they suffered till now. Flashbacks of whatever happened in the past are shown. Harshvardhan shocks the Goenkas by telling them that Abhimanyu is missing. They say that they don’t know where Abhimanyu went. Manish gets angry at Birlas for bringing Abhimanyu’s baraat without him. He asks Birlas if they are hiding their sin behind their pretense of innocence. Akhilesh questions Harshvardhan why he is silent today.

Reviewed Rating for Yeh Rishta 22nd January 2022 Written Update Wedding finale: 3/5 This rating is solely based on the opinion of the writer. You may post your own take on the show in the comment section below.