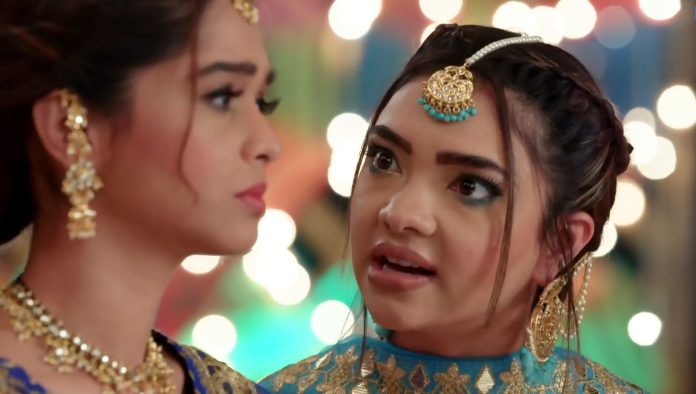 Kumkum Bhagya 25th January 2022 Written Update Battle begins Dida gifts a dress to Prachi for Lohri. Shahana asks Prachi why didn’t she wear the dress, doesn’t she like the nice dress gifted by Dida to her. Prachi tells that she liked the dress, but not the colour, Ranbir doesn’t like that colour much. Shahana tells that Prachi claims to hate Ranbir and take revenge on him, but he is still in Prachi’s heart, her love is evident. She asks Prachi to accept her love for Ranbir. The entire family gets decked up for celebrating Lohri.

Vikram tells Pallavi that Rhea isn’t wronged in this situation, Prachi is the one who is suffering, wrong has happened with Prachi in their house. Pallavi is surprised to see Vikram changing his side. Rhea and Prachi get decked up in the clothes of Ranbir’s favorite colour. Rhea tells Prachi that Ranbir is just of Rhea, not of Prachi. She claims that she has Ranbir in her Kumkum Bhagya. She asks Prachi to always remember this. She hurts Prachi by her harsh words, but Prachi motivates herself to stay strong.

Earlier in the show, Shahana wants Prachi to see Ranbir’s love. Dida tells that they both will see their love once their misunderstandings subside. Shahana tells about the tension at night. Dida laughs and tells an idea. She tells that Ranbir and Prachi will unite themselves because of their peak emotions. She knows that they can fight, but not let anyone else separate them. Shahana likes to hear this and happily hugs Dida. Prachi comes there to meet Shahana and finds Shahana hugging Dida emotionally.

He asks her to listen to him. Dida overhears their arguments. He tells Pallavi that he didn’t expect her to do wrong. They see Dida at the door. He apologizes to Dida. Dida tells that they shall not fight. Vikram tells that the fight is happening between Rhea’s Saas and Prachi’s Sasur. Dida likes to hear his supportive words for Prachi. She hugs him and tells that she is thankful that he doesn’t find Prachi wrong now. He tells that Prachi was never wrong, he did late to see her truth. Prachi tells Shahana that she will get ready soon.

Prachi tells that she liked the dress, but its not of Ranbir’s favorite colour. Shahana teases her for still thinking of Ranbir. Prachi tells that she wants to stay positive and happy for the sake of the baby. Shahana promises to keep her cheerful. The sisters hug. Aaliya finds herself in Rhea and tells that Rhea is just her reflection, confident and victorious. Rhea tells that she feels winning when Ranbir is with her, she loves him and she wants revenge on Prachi. She tells that she gets more happy to hate Prachi and defeat her, like she is answering Pragya. She knows that Aaliya understands her feelings.

She wants the sole attention of the family. She blames Prachi for snatching her love and happiness. She tells that Prachi is a curse for her. She tells that Prachi snatched her dad as well. She explains Aaliya that her hatred for Prachi is much bigger than her love for Ranbir, she wanted to separate Ranbir and Prachi, she will love Ranbir until Prachi has feelings for her, until Prachi claims her rights on Ranbir. Pallavi comes there and hears Rhea’s hatred for Prachi. Rhea tells that Prachi is all alone, no one supports her. She wants to see Prachi totally alone. Rhea tells that she loves Ranbir even more seeing him ignore Prachi.

Aaliya tells that Prachi can do anything anytime. Rhea tells that she isn’t worried. She asks Aaliya to trust her, she is winning. Rhea and Pallavi go to attend guests. Dida wishes everyone on Lohri. Ranbir receives compliments from Shahana. He tells Dida that Shahana always praises him. He tells that he isn’t good, else Prachi would not hate him. Shahana tells that Prachi and Ranbir have unique equations. Dida tells that opposites attract. Jai reaches there. He shows his interest in Shahana. He tells Ranbir that he broke up with Palak, he has no girlfriend, he is focussed on work. Ranbir asks Jai if he likes kids.

Jai tells that he loves kids a lot. Ranbir thinks Jai can marry Shahana and accept her coming baby. He tells that Jai will look good with Shahana. Shahana tells Dida that Prachi didn’t wear the dress gifted to her, she wanted to wear Ranbir’s favorite colour dress. Dida is happy. Rhea laughs hearing about Prachi’s efforts. Pallavi finds Aaliya upto something. Prachi bumps into Rhea, who starts the insulting remarks. She tells that she doesn’t want to talk to her. Rhea asks her why does she hate her so much. Prachi asks Rhea to behave well and get respect for free, else her first Lohri will become the last one. Rhea tells that she is really scared. Prachi doesn’t want any fights on the Lohri day.

Rhea tells Prachi that innocence doesn’t suit her. She asks Prachi why did she wear Ranbir’s favorite colour. She reprimands Prachi for her attempt to please Ranbir. She asks Prachi how far will she run from her fate. She tells that bad luck will follow Prachi, she doesn’t have her parents and husband along, she has no family, even her sister is an enemy. She advises Prachi to run away if she wants to protect herself from hurtful truth. She tells that Ranbir will always be of her, Kumkum Bhagya will also be of her.

Reviewed Rating for Kumkum Bhagya 25th January 2022 Written Update Battle begins: 5/5 This rating is solely based on the opinion of the writer. You may post your own take on the show in the comment section below.