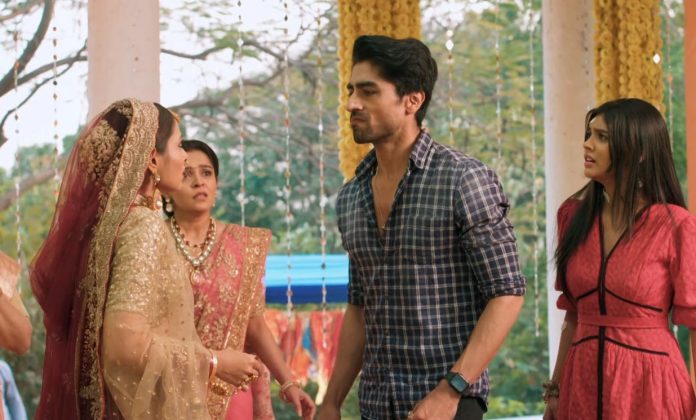 Yeh Rishta 24th January 2022 Written Update Love brawl Akshara and Abhimanyu are seen holding each other’s hands. Aarohi sees Goenkas and Birlas arguing downstairs. She realizes that both Abhimanyu and Akshara aren’t present. Anand says to Goenkas that they know Abhimanyu is not in their control. Akhilesh taunts Birlas for always getting helpless in front of Abhimanyu. He further says Manish was right when he said that Birlas aren’t trustable. Akhilesh tells Birlas that they don’t have any values and can control their son and his actions. Suhasini asks Birlas how they would handle Aarohi and tell her that Abhimanyu went missing.

She says that Aarohi would get hurt. Arguments continue in between both families. Angry Aarohi comes and stops both families’ arguments. Everyone gets shocked seeing Aarohi downstairs. Aarohi says not only Abhimanyu but Akshara is missing too. This gives another shock to everyone. Aarohi asks everyone to search Akshara. Harshvardhan claps mockingly and taunts Goenkas for Akshara’s absence. Anand says that they need to find out if Akshara went with Abhimanyu or not. Aarohi asks everyone to find Abhimanyu and Akshara. She says that she is sure that Abhimanyu and Akshara would be together only.

Aarohi’s words shock everyone. Harshvardhan taunts Manish saying that Akshara ran away with Abhimanyu. Anand says they can’t exercise control over anyone. Harshvardhan says he agrees that his son Abhimanyu is stubborn. He asks Manish what is the mystery behind his naive and innocent Akshara. Harshvardhan tells Kairav that the sister (Akshara) he dotes has ruined their life. Kairav tells Harshavardhan that it takes two to tango. He tells Harshavardhan that their argument is of no use as both Abhimanyu and Akshara are missing. At the temple, Abhimanyu lights the havan kund.

Abhimanyu sees that Akshara’s dress caught fire. He tries to blow it off. Akshara and everyone gets shocked seeing Abhimanyu’s care for Akshara. Abhimanyu hugs a scared Akshara. Scared, Akshara gets clingy to Abhimanyu. This shocks everyone but angers Aarohi and Harshvardhan. Akshara notices that an angry Aarohi is holding her outfit tightly in anger. She tries to separate herself from Abhimanyu but her kurta button gets stuck in Abhimanyu’s locket. She separates herself from Abhimanyu but then their bracelets get stuck with each other. Akshara separates them too. In his thoughts he tells Akshara that she can’t fall weak again. He requests Akshara to fight for her love otherwise he will die (be doomed).

Suhasini says she can’t understand what is going on. Aarohi says this happens always as Akshara can’t tolerate happiness. She accuses Akshara of always snatching her happiness. Aarohi tells Akshara that she won’t let her snatch her happiness today. Aarohi asks Akshara to say what she was doing with her Abhimanyu in the temple. Harshvardhan says Akshara can’t answer her sister’s allegations. He says he was right that Akshara is really problematic. Harshvardhan asks Akshara what is her new plan that Abhimanyu is here with her. Manish asks Harshvardhan why can’t he question Abhimanyu the same thing. He says Abhimanyu threatens his own father and does what his heart says.

Manish asks Harshvardhan to question his own son before questioning his daughter. He further asks Harshvardhan what mental illness Abhimanyu has that he remains confused everytime. Harshvardhan says forget Abhimanyu as they are questioning Akshara today. Abhimanyu feels that everyone’s argument as well as Harshvardhan’s ill words against Akshara has gone too far. He thinks Akshara would have to speak up first. Abhimanyu thinks he will handle everything once Akshara confesses her love for him in front of everyone and says that she wants to marry him (Abhimanyu). In a low voice, a misunderstood Manjiri asks Abhimanyu and Akshara why did they marry each other by eloping, when she told them that she would support them in front of everyone.

In his thoughts Abhimanyu tells Manjiri that he can understand her but is just waiting for Akshara to speak up. He says now everything and every decision is in Akshara’s hands. Abhimanyu says he will support Akshara once she speaks up. Aarohi shakes Akshara and asks her why she is snatching her happiness when she assured her that she won’t. In his thoughts, Abhimanyu asks Akshara to tell everyone that she loves him and did everything for Aarohi’s happiness. He requests Akshara to not sacrifice her love and feelings for Aarohi. Aarohi blames Akshara for Sirat’s death in front of everyone. This shocks Birlas.

Reviewed Rating for Yeh Rishta 24th January 2022 Written Update Love brawl: 5/5 This rating is solely based on the opinion of the writer. You may post your own take on the show in the comment section below.