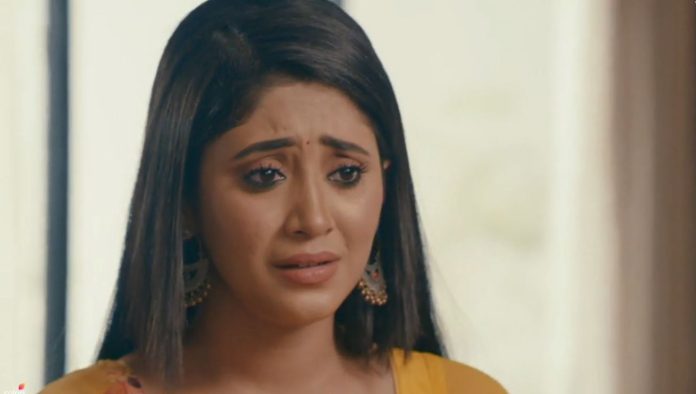 Balika Vadhu 25th January 2022 Written Update Major twist Anandi asks Jigar what he is doing here. Jigar says he came to see Laila-Majnu’s love story. Anand asks Jigar whom he is trying to scare as Anandi is no longer his wife. Jigar says one paper can’t decide his fate. Anand asks Jigar if an evil person like him will decide what is his and Anandi’s relationship. Jigar gets angry and shakes Anandi badly. Anand asks Jigar to stop troubling Anandi and leave her. He tells Jigar that he would kill him if anything happens to Anandi. Anandi gets shocked hearing this.

Bhairavi overhears Anandi, Anand and Jigar’s conversation. Jigar falls down on the floor on the wire because of his fight with Anand. Bhairavi switches on the light and Jigar suffers a current. He screams in pain. Anandi and Anand get shocked seeing Jigar suffering a current. Bhairavi runs away from there. Anandi and Anand take Jigar to hospital. Anandi requests the doctor to examine Jigar and save him. Doctor asks Anandi to not worry and takes Jigar inside the ward for treatment. Anandi tries calling Sejal two times to inform her about Jigar’s condition. Sejal ignores Anandi’s call and thinks about what Anandi wants from her now that she has already left them.

Anandi calls Sejal through the hospital’s landline. She informs Sejal that Jigar suffered a current. Sejal gets shocked hearing it. She goes to inform Premji and Maadu about it. Maadi Baa mistakenly leaves gas switched on and leaves to get ready for hospital in tension. At the hospital, Bhairavi asks Anand to get ready to leave for the US. Anand refuses to leave Anandi alone. He and Bhairavi argue a lot. Bhairavi asks Anand to understand that Anandi is not a kid and can take care of herself and everyone. On the other hand, Maadi Baa stops Sejal and Premji from leaving. She tells them that she wants to light a diya for Jigar’s safety before leaving.

Anand tells Anandi that he wants her to live safely with him in the US. Anandi refuses to go to the US with Anand. Anand grabs Anandi’s hand and continuously requests her to agree to his wish. Anandi gets angry and asks Anand to leave her hand. Bhairavi asks Anand to leave Anandi’s hand and behave. She thinks she needs to send Anand to the US anyhow and soon to save him from Jigar. Anand realizes his mistake and apologizes to Anandi for his bad behavior with her. Doctor comes outside. Anandi asks him how Jigar is. He tells Anandi that Jigar suffered a high voltage current. Doctor further reveals that Jigar’s brain isn’t responding. This shocks Anand, Anandi and Bhairavi.

In Devgarh/Raigarh, at hospital Sejal opens her eyes. Nurse and Doctors ask her to rest seeing her condition. Worried, Sejal asks them about Maadi Baa and Premji. Doctor informs Sejal that Premji got burnt very badly and is serious. Sejal gets shocked. She asks them about Maadi Baa. Doctor tells Sejal that Maadi Baa died before reaching the hospital. Sejal cries profusely. She runs to meet Premji. Premji in bad condition asks Sejal to tell Jigar that his father loved him a lot. After some time, Sejal reaches the hospital where Jigar is admitted. She runs in Aanadi’s arms and tells her that she became an orphan and a widow together. Anand, Anandi and Bhairavi get shocked. Sejal tells Anandi that Maadi Baa and Premji died in the blast. This shocks Anandi, Anand and Bhairavi more.

Sejal cries a lot in Anandi’s arms. A nurse comes and tells Anandi that reports came. Anand asks the nurse about Jigar’s condition. Nurse informs everyone that Jigar fell into a coma. This shocks Sejal, Anandi, Anand and Bhairavi. While Bhairavi feels a little relaxed, Sejal breaks down in Anandi’s arms. Anandi asks Sejal to not worry as they will take Jigar to Raigarh for better treatment. Nurse tells Anandi that it would be better and safer to continue Jigar’s treatment in Ahmedabad only.

In the next episode, Jigar will be seen with a jerked neck on the wheelchair. A Doctor will say that Jigar’s recovery seemed impossible three years ago. Sejal will say that this is happening because of Anandi’s efforts. She will further say that this house, Jigar’s doctor and medicine fees comes from Anandi’s income. Anandi will be seen twirling happily in a boutique. On the other hand, a person will be seen telling Bhairavi and Mehul that he will be forced to auction their house with their business too if they fail to return his money in the next three months. Anand will be seen with luggage and will tell the person that this house won’t get auctioned.

Reviewed Rating for Balika Vadhu 25th January 2022 Written Update Major twist: 2/5 This rating is solely based on the opinion of the writer. You may post your own take on the show in the comment section below.