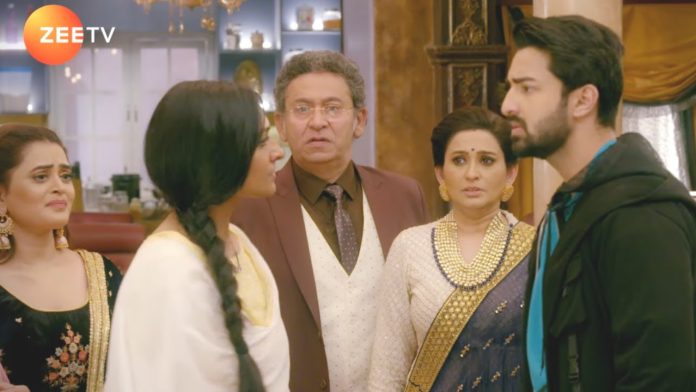 Bhagya Lakshmi 26th January 2022 Written Update Rishi confronts Lakshmi Lakshmi visits the Oberois to return the documents to Rishi. She wants to meet Virender. Karishma finds her entering the house and stops her at the door. She asks her to just leave. Sonia and Karishma oust Lakshmi. Virender stops Lakshmi from leaving. Lakshmi cries and hugs him. Neelam asks Lakshmi for her coming. Neelam asks Lakshmi to come back to stay with them. Lakshmi answers that she has no relation with Rishi now, hence she can’t return home. On the other hand, Rishi goes to Rano’s house to meet Lakshmi. Rano sees him coming and pretends in front of him to mislead him about Lakshmi.

She tells that Lakshmi was waiting for a chance to break her marriage with Rishi, she was waiting that he does some mistake and then she files for the divorce just to get alimony from him. Rishi is shocked to know this. He gets disheartened and returns home. He finds Lakshmi with his family. He tells that Lakshmi is right, she has no relation with him and his family, but she still has a relation with his richness. She begins to leave, but he stops her to confront her about the divorce papers sent by her just to demand a huge alimony. He reads out the divorce notice for her. Lakshmi is shocked to know about the divorce.

Their trust further breaks because of the misunderstanding planted by Rano. He tells that Lakshmi wants money. He gets a bag filled with cash. He frees Lakshmi from their marriage, and angrily pours the money over her. He tells that he has paid the money to her because she saved his life. Lakshmi is shocked by such a humiliation. He asks her to take the money and leave. Lakshmi returns the money to him. She asks him to keep the money and return her the love which she had for him, thinking he is her husband. She angrily leaves the house.

Shalu, Lakshmi and Bani clean their room. They plan to go to the garden in the morning. She gets to see the papers. She recalls Rishi and his kind words to protect her dignity. She also remembers his promise. She tells them that she met Rishi today. Shalu and Bani ask her about the incident. She tells them that she fell into trouble in the office, and Rishi helped her, he stood for her like the old times, she was called a liar, she was blamed, but Rishi proved her innocent, he fought against everyone for her sake.

She tells that she was thinking to meet Rishi and return the papers, it maybe important. Shalu asks her will she go home. Lakshmi tells that Rishi helped her and now its her turn to help him. They support Lakshmi. Rano reads her horoscope. She gets happy thinking that she will be getting money soon. She happens to see the divorce papers with Lakshmi. She worries thinking Rishi and Lakshmi met and discussed about the divorce, but Rishi didn’t sign the papers till now. Lakshmi goes to meet Rishi. Shalu and Bani tell Rano that Lakshmi is going to return the papers to Rishi, even they didn’t check it, it can be personal.

Ayush asks her not to take stress. She sees Rishi coming. Rano wonders what she will do if Rishi doesn’t sign the papers. She doesn’t want Lakshmi to forgive Rishi and return home. She tells that all her dreams will shatter if Lakshmi agrees to reconcile with Rishi. She doesn’t want this compromise to happen. She thinks what to do. She calls Neelam, who doesn’t answer. Rano calls Rishi. She asks him about the divorce papers. Rishi tells that he got busy and forgot the papers.

Rano tells that he doesn’t value Lakshmi, he is so careless to drop the divorce papers, Lakshmi got the papers home. She asks him to sign the papers and give it to her. Rishi rushes to meet Lakshmi. He wants to talk to her. Lakshmi leaves for Oberois house. She feels strange. Rishi goes to meet Lakshmi at Rano’s house. He wants to free Lakshmi so that she also moves on. He tells that he should be happy for her new start, but he is hurt and unhappy that he is losing a relation. He wants to tell Lakshmi what he feels. Lakshmi arrives home. Sanjay goes to inform everyone. Karishma and Sonia stop her.

Lakshmi tells that she didn’t return home, she just wants to meet Rishi. They tell her that Lakshmi isn’t at home. They ask her to leave. Rishi asks Rano where is Lakshmi. Rano tells that she isn’t at home. He asks where did she go. Sonia asks Lakshmi to keep some self-respect and spare Rishi. Lakshmi reminds her manners. Karishma asks Lakshmi not to give lecture to Sonia. Lakshmi tells that she has come to meet Rishi for some work. Virender comes to meet Lakshmi. Virender’s call stops Lakshmi. He apologizes to her. She hugs him.

Rano tells Rishi that Lakshmi has gone to his house. Rishi asks why did Lakshmi go to his house. She tells that his family was misunderstanding her and scolded her, so Lakshmi went to meet them and clear the misunderstanding. She tells that Lakshmi wants the divorce and the alimony. Rishi runs out of the house. Rano asks him to take her along. Virender asks Lakshmi is she okay. He scolds Karishma for misbehaving with Lakshmi. She tells that she was tackling Lakshmi. Sonia asks him not to see Lakshmi’s drama and send her away. Ayush asks Sonia to respect Lakshmi. Sonia and Ayush get into an argument.

Lakshmi asks Ayush to calm down. Sonia tells that Lakshmi is cunning to make her family against her. She gets upset. Virender asks Sonia to stay in her limits. Lakshmi asks them to stop arguing. Karishma asks her to stop pretending good. Lakshmi asks them not to drag the matter, she came for some work. Dadi comes home and gets glad to see Lakshmi back. She also apologizes to Lakshmi. She blesses Lakshmi, who tells that she didn’t come home to stay. Neelam finds Lakshmi in the house. She hears Lakshmi talking to the family. Lakshmi tells that she will leave on her own. Neelam asks Lakshmi what work she has.

Rishi runs back upstairs to get the car keys. Rano thinks Rishi got trapped today. She makes Rishi hear about Lakshmi’s plan to demand a big alimony. Rishi gets disheartened hearing this. He thinks Lakshmi really wants to end the marriage for the sake of alimony. She tells that Rishi is just a lottery for Lakshmi, he is really wrong, he has an affair with Malishka, and now he will pay a price for it.

Reviewed Rating for Bhagya Lakshmi 26th January 2022 Written Update Rishi confronts Lakshmi: 5/5 This rating is solely based on the opinion of the writer. You may post your own take on the show in the comment section below.