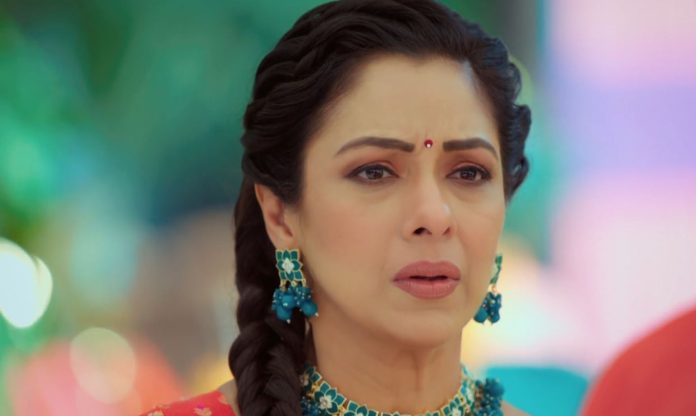 Anupama 26th January 2022 Written Update Clashing twist Malvika sees Vanraj alone and tries to scare him. Vanraj doesn’t get scared. Malvika asks him why he didn’t get scared. Vanraj tells her that he has got habitual of her presence. Malvika tells him that he has got a good habit. Vanraj apologizes to Malvika from Kavya’s side for ruining her festival and mood the day before. Malvika says she also ruined New Year celebrations. She asks Vanraj to not take tension as she won’t judge him with whatever happened between him and Kavya. Malvika tells Vanraj that she respects him for being honest with Kavya even being harsh.

Vanraj tells Malvika, it’s good that at least she understands him. He says otherwise everyone considers him a villain and Kavya a victim. Vanraj tells Malvika that he accepts that he made many mistakes and lacks many things. He asks Malavika who is innocent in this world, who has not committed any mistake or lacks anything. Vanraj asks Malvika if he is targeted just because he is a man. He tells Malvika that he has got fed up hearing that man is a tyrant and woman is a helpless victim even if she does anything.

Vanraj tells Malvika that he feels bad when he has to justify himself to his family. Malvika tries to pick up Vanraj but fails. She tells Vanraj that she wanted to take him to the lounge to rest as he said that he has got tired. Vanraj tells Malvika that she will die if she tries to pick him up. Malvika laughs and tells Vanraj that he is very heavy even being slim. She asks him to always stay happy like this, as he looks handsome that way. Malvika leaves for a meeting, asking Vanraj to check her printouts. Vanraj smiles seeing smiling emojis printouts and calls Malvika a crazy girl. On the other hand, Kavya asks Anupama if Baa and Bapuji sent her to lecture her.

Anupama requests Kavya and Nandini to understand the difference between self- respect and ego. She asks them to leave after getting answers to all their questions, instead of leaving like thieves. Kavya stops Anupama and asks her help to get her a job, saying that she doesn’t want to be more helpless now. On the other hand, Vanraj says much work got left behind due to festival holidays. Malvika says festivals should also be enjoyed properly. Anuj thinks why Anupama didn’t reach office till now. Anupama enters the office with Kavya, shocking everyone, especially Vanraj. Vanraj gets angry and asks her why she brought Kavya to their office.

Anupama says it’s Kavya’s office too now. She further says that Kavya will work with them on their project. Anuj stops Vanraj from bursting out. Anupama says everyone should get a second chance. Anuj agrees to Anupama’s decision. He requests Kavya to not break Anupama’s trust the second time. Kavya agrees to this. On the other hand, Nandini requests the universe to give her a sign or hint. She sees a happy couple saying “lol” to each other. Nandini recalls her and Samar’s happy and romantic moments through this. At office, Anupama says that Kavya will work on their project from the next day. Malvika says she already said that Kavya is actually talented and capable. Kavya thanks Malvika, Anuj and Anupama for giving her another chance.

In his thoughts, Vanraj tells Anupama that he knows she brought Kavya to keep Malvika away from him. In her thoughts, Anupama tells Vanraj that she knows what he is thinking. She says she brought Kavya to give her a second chance. Anupama wishes that Vanraj may use his brain and give his marriage with Kavya a second chance. Vanraj leaves angrily. Nandini runs to Samar outside the house and hugs him tightly. She says “I lol you” to Samar. Nandini tells Samar that she wants to stay happily with him forever. She also tells Samar that she tried to go far away from him by leaving the country but failed to convince her heart to do so. Nandini says she got a sign from the universe with the word “lol”. She explains to Samar that the universe’s sign cleared all her confusion.

Samar remains silent on Nandini’s love confession. This shocks Nandini. Vanraj throws things here and there in his office cabin to calm his anger on Anupama’s decision to bring Kavya to their office. He thinks Anupama did wrong. On the other hand, Samar bursts out at Nandani. He tells Nandini that he also can’t live without her. Samar explains to Nandini that their ego is coming between their relationship. He explains to Nandini further that he fears how will their relationship stay for long if their ego will clash everytime. Samar explains to Nandini that the problem is that both their ego and anger are of equal level. He asks Nandini what would have happened if the universe wouldn’t have given her any signal.

At the office, Malvika jokingly asks Kavya about the mystery behind her glowing skin. She wishes Kavya “All the best” for her new job. Malvika says she is stressed after knowing that Kavya joined Anuj and Anupama in their project too. She says that now she will have to work hard on her project. Malvika goes to eat something to release her stress. Kavya too leaves to meet HR. On the other hand, Samar asks Nandini what will happen if they fight again and the universe signs them to go separate ways. He explains to Nandini that they are failing to maintain their relationship. Samar tells Nandini that they should think before starting their relationship afresh. Nandini agrees to Samar’s suggestion and they go their separate ways.

At Shah house, Baa and Bapuji worry, thinking that Kavya, Vanraj and Malvika will be working in the same office. Baa thinks why Anupama got Kavya a job, where Vanraj works too. Bapuji explains to Baa that Anupama surely would have done all this after thinking a lot. Baa agrees to Bapuji. Both Baa and Bapuji get worried seeing Kavya and Vanraj returning home in anger. Kavya takes out a formal outfit for her first day at Kapadia office. Vanraj remains silently angry. Malvika asks Anuj to return home with her, leaving work for tomorrow. She leaves when Anuj and Anupama tell her that they will leave and return together after completing some more work.

Anuj asks Anupama how will their lot of remaining work complete now. At Shah house, Kavya recalls Vanraj’s decision and words when he said that he can tolerate anything but doesn’t want to live with her anymore. Vanraj recalls the promise he made to himself to become successful. He also recalls that Malvika said that she can leave giving him all her business, if she doesn’t feel like working. Vanraj also recalls how Anupama made Kavya a part of her project and employee of their office.

In the next episode, Anuj and Anupama will cover each other in the office seeing each other getting/feeling cold. Vanraj will ask Malvika to start their restaurant in Mumbai with a business point of view. Anupama will suggest Malvika to launch her project in Ahmedabad first. Anuj will agree to Anupama’s decision. Malvika will be frustrated abd tell Anuj that he always finds Anupama right. She will tell Anuj that he has started supporting Anupama even before marriage. Malvika’s words will shock everyone, while Vanraj will smirk.