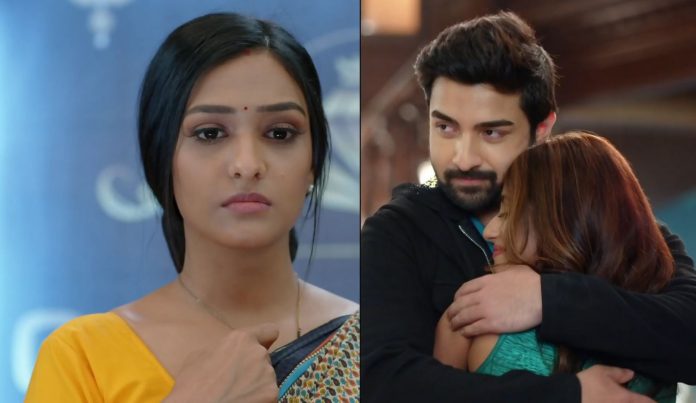 Bhagya Lakshmi 28th January 2022 Written Update Rishi proposes Malishka Rishi angrily goes to his room and ruins it down in memory of Lakshmi, which is leaving him too distressed. He tells that its enough now, he will not cry for Lakshmi anymore, his relation with Lakshmi is over and he isn’t in any guilt now. He thinks he should be happy that he finally got his freedom back. He wants to celebrate but doesn’t know why he is feeling so upset. He thinks to distract his mind. He gets ready and goes to meet Malishka at her house. He proposes her with love for marriage. He asks Malishka will she marry him, leaving her stunned in joy. Malishka accepts his proposal.

They have a lovely hug, while Kiran is happy for their much awaited union. Rishi tells Kiran that he wants to buy a ring for Malishka. Malishka asks for mangalsutra. He tells that they will buy that as well. He takes Malishka for shopping. On the other hand, Darshan connects with Lakshmi. He asks her to join his jewellery store. He apologizes for whatever happened last time when Lakshmi was denied of the job by his staff. He tells that he will think that she has forgiven him if she comes to take the job. Lakshmi tells him that she isn’t upset, there is nothing to forgive. She agrees to meet Darshan at the jewellery store.

She reaches the store and takes the job. The lady who denies her the job before, takes her to show her duties. She asks Lakshmi to handle the mangalsutra counter, because she is married and would be able to explain the significance of the nuptial chain to the couples well, and also help them in the selection. Lakshmi gets to see the mangalsutra. She gets upset and recalls Rishi, their marriage moment and when he made her wear the mangalsutra. Rishi and Malishka land up at the same jewellery store to buy a ring and a mangalsutra. Will they come across Lakshmi? Keep reading.

Earlier in the show, Rano tells the Oberois that Lakshmi didn’t know anything, it was her plan that she sent the divorce papers. Ayush asks Lakshmi to see disgusting Rano. Lakshmi tells that Rano did the right thing, she should have not asked for money, but its good that she got to know Rishi’s thinking. She taunts Rishi for pricing everything, her care and love were for her marriage, but he priced every care. Rishi tells that he has hurt her and even she has hurt him. He tells that relations are made by heart, not any papers.

He ends their marriage, reminding her that she already broke the marriage in the temple that day. Lakshmi tells that the relation never meant to him, he can’t break any non-existing relation, she will break the relation once again. Lakshmi leaves from the house in anger. She doesn’t want to trust Rishi again. Rishi and Lakshmi shed tears.

Rishi misses Lakshmi and cries a lot. He ruins the bedding and furniture. He sinks in sorrow. Rano brings Lakshmi home. She rebukes Lakshmi for her big mistake to refuse for alimony. She tells that Lakshmi didn’t need to leave the house, its fine if Rishi has an affair, she is still his wife and could have stayed with him. She asks Lakshmi if she will beg on the road to earn a living. Lakshmi calls it enough. She tells that Rishi and she broke the relation today, which didn’t exist in reality. She asks Rano why did she ask for money, its totally wrong. Rano asks her to pay the money to her, if she can.

Lakshmi tells that she will do a job and then pay her the money. Rano asks Lakshmi didn’t she get the sense till now, she couldn’t find any job, she can’t earn any money now or ever. She calls Lakshmi selfish. She scolds her further. Rishi wakes up and checks Malishka’s missed calls. He tells that he will go and meet Malishka, he will not care for Lakshmi now, when he is free from their marriage now. He goes.

Rano tells that she can’t give the money to the lawyer. Lakshmi gets Darshan’s call. He tells that he had called her mobile number first. He adds that he offered her a job in the jewellery store, there was miscommunication so the store staff refused to her. He apologizes and asks her to join the job today itself. Lakshmi cries happily. She thanks him for the job. She tells that she didn’t expect him to call her. He sends her the address and asks her to come, he will introduce her to the staff and not let any mistake happen. She gets happy to share the good news with her sisters. They hug her. She tells Rano that she got the job, she will earn money by respect. Rishi arrives to meet Malishka.

He still thinks of Lakshmi. He doesn’t want to think of the same things again. He decides to give love to Malishka and make her happy. Malishka asks Kiran not to tell anything to Rishi. Kiran tells that she has to talk to him. They find Rishi in the hall. Rishi asks them the matter. Malishka tells that the matter isn’t important. Kiran tells Rishi about Pammi aunty, who had seen everything and informed Viraj about it. She reveals how a drunk Viraj came home and broke everything in anger. Viraj accused Malishka for the cheat. She tells Rishi that Viraj broke the relation with Malishka.

She is concerned that Viraj warned them that Rishi will leave Malishka one day, like she cheated him. She also doesn’t think Rishi can give security to Malishka when he couldn’t stay loyal towards his wife. She tells that Malishka loves Rishi, but she needs a commitment, he has to marry Malishka, else she will lose her respect.

Kiran tells Rishi that their marriage didn’t happen, its unsure that it will happen ever. Rishi tells that he will marry Malishka, they will be together. He gets on his knees and proposes Malishka for marriage. Malishka gets happy and accepts his love. Darshan tells the staff about Lakshmi. He praises Lakshmi. Lakshmi arrives there. Darshan welcomes her. He apologizes to her again. She thanks him for the job. He introduces the store manager, Kalyani, who will train Lakshmi. Kalyani takes Lakshmi with her to explain the class.

Kalyani tells Lakshmi that Darshan is good-hearted and give job to many needy people. She lectures Lakshmi. She asks her to wear the uniform and come. Rishi tells Malishka that he broke all his ties with Lakshmi, now there is nothing between Lakshmi and him. Malishka is really happy to know this. Lakshmi starts a new life. Kalyani asks her to make her life on her own and move on, else she will do wrong with herself. She tells that nobody can help her, she has to help herself.

She encourages Lakshmi to get a real smile on her face. She asks Lakshmi to handle the mangalsutra section. Rishi tells Kiran that he will take Malishka to the jewellery store, he will buy a ring and anything that she likes. Malishka is happy to receive an engagement ring. She demands for mangalsutra as well, to which he agrees. Kiran leaves them alone.

Reviewed Rating for Bhagya Lakshmi 28th January 2022 Written Update Rishi proposes Malishka: 5/5 This rating is solely based on the opinion of the writer. You may post your own take on the show in the comment section below.