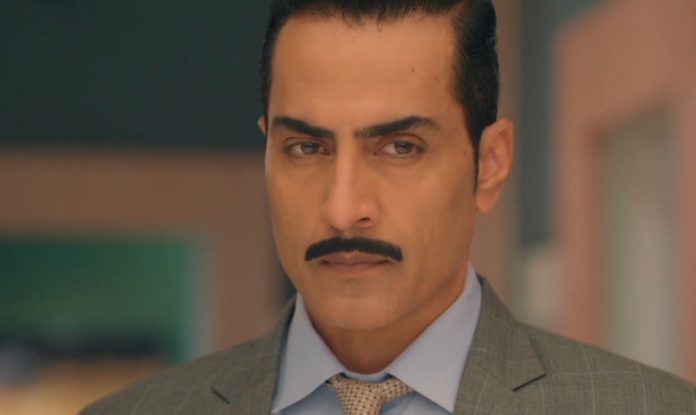 Anupama 28th January 2022 Written Update Vanraj challenges Vanraj, Anupama and Kavya almost collide in the office. Anupama confidently stares at Vanraj. Vanraj gives an angry glare to Anupama and a scared Kavya. While glaring at both women, Vanraj thinks that he will finally succeed some day in controlling Malvika and make her work according to him. He smirks thinking that Anuj’s life resides in Malvika and her remote is in his hands. After Vanraj leaves, Kavya tells Anupama that she took this job to be near Vanraj. She asks how she would live without Vanraj.

They also apologize to each other and understand their protective nature towards their mother and aunt. Samar tells Nandini that they should try to take stand for either their mother or aunt but not misunderstand the other. They say, “forever I love you” to each other and hug tightly. At the office, Anupama informs Anuj that she is going to Shah house. Anuj mistakenly asks Anupama who goes maternal house so much. He realizes his mistake and slows down. Anuj gets shocked, when Anupama tells him that she will return the next day. She jokingly tells Anuj that she will stay at her maternal house for at least one night. Seeing Anuj sad, Anupama tells him that she will return in two hours.

Kavya comes and Anuj asks Anupama to return on time. Anupama says yes and leaves with Kavya. Kavya tells Anupama that she is very lucky as fate gave her more than it took away from her. Anupama explains to Kavya that one’s own pain always looks bigger than another person’s pain. She asks Kavya to focus on herself. Malvika asks Anuj what he will do if Anupama goes away from him for a long time. Anuj gets scared thinking about it and stops Malvika from saying this. Malvika calls Anuj “Devdas Bhai”. She asks Anuj to not worry, saying that Anupama won’t go anywhere. Anuj tells Malvika that he trusts Anupama not his destiny.

He also tells Malvika that he got hope after meeting Anupama. Anuj says he still fears losing Anupama somewhere. Malvika says that the person fears more, if he/she has already lost someone once. Anuj tries to figure out the meaning behind Malvika’s words. On the other hand, Kavya thanks Anupama for getting her confidence back through the job in office. Anupama gets angry seeing Vanraj sitting on a chair near the front door in anger. Vanraj sarcastically blames Anupama and Kavya for creating issues for him together. He says much changed in one and half years. Anupama tells Vanraj that he still hasn’t changed even a bit. She tells him that he is still sitting on the chair on which he used to sit one-half year ago.

Vanraj shouts in anger. Whole family comes there hearing the argument. Anupama tells Vanraj that he always shouts taking someone’s name in anger when he gets left with no answer. She tells him that he won’t have to shout if he says sensible words. Vanraj tells Anupama that his words will sound sensible once he gets successful. He asks Anupama and Kavya if they got together because they can’t tolerate his success through his partnership with Malvika. Vanraj accuses Kavya and Anupama of trying to ruin his happiness and success. He tells family that Anupama can’t tolerate his and Malvika’s friendship. Kinjal tells Vanraj that not Anupama but Kavya has a problem with his and Malvika’s friendship.

Vanraj says Anupama brought Kavya to their office to trouble him. He says he can’t breathe with Anupama and Kavya in the same office as him. Vanraj says Kavya and Anupama have made it difficult for him to live. Anupama asks Vanraj to have some shame for pretending to be indigent in front of women who he harassed till 26 years. She humiliates and congratulates Vanraj for becoming an indigent person. Vanraj says he is not indigent but upset and sad because of her and Kavya. Anupama asks Vanraj why he is shouting to show that his pain is big after giving endless pain to others. Angry Vanraj asks Anupama why she is making fun of his pain.

He asks her if a man can’t be upset and in pain. Vanraj tells Anupama that he increased his anger by bringing Kavya to their office. Kavya supports Anupama and reminds Vanraj that she is “Mrs. Kavya Vanraj Shah”. Vanraj sarcastically asks Anupama and Kavya how they became good friends from a long time arch-enemy. He tells Baa that Anupama and Kavya are using Anuj and Malvika to break his dreams. Anupama tells Vanraj that he breaks others’ dreams. She further tells Vanraj that she has always helped him in his dreams. Vanraj asks Anupama to stop counting his favors on him. Kavya asks Vanraj if Anupama can’t even talk about the favors she did for him, when he can represent the mistakes which Anupama never did.

Vanraj tells Anupama that Kavya has started speaking in front of him because of her. Anupama asks Vanraj if he always wants his wife to run on his commands. She further asks Vanraj if wife mistakenly says something, it still bothers him. Vanraj shouts and Samar tells Vanraj that he can’t talk to his mother in a rude tone. Paritosh asks Samar to not talk in between the elders. Baa blames Kavya’s office-going for the current argument. Kinjal asks Baa if Kavya should not progress fearing Vanraj’s mood swings. Bapuji asks Vanraj if he didn’t get tired of making mistakes. Vanraj tells Bapuji that Anupama and Kavya are at fault this time. Baa asks everyone to stop.

Vanraj tells Anupama that now even god can’t move him away from his goal. Everyone gets shocked by Vanraj’s words. Kavya apologizes to Anupama and goes behind Vanraj. Anupama drinks water in a little tension. She apologizes to Baa for the drama. Anupama tells Baa that she promised to God that she will help other women like God helped her. She says she can’t break the promise she made to God and this helped Kavya. Anupama thinks if Vanraj gets closer to Malvika, it will be harmful for everyone, especially Malvika. She thinks only Kavya can keep Vanraj away from Malvika. Anupama tells Shahs that the only way to maintain peace in both households is to keep Kavya and Vanraj together. Bapuji, Kinjal, Baa and Samar agree with Anupama.

Anupama tells Shahs she wouldn’t have interfered if Kapadia’s and her life wouldn’t have been joined with them together in some way. She says Shah house can’t ever be a stranger’s house for her as her parents like figures and kids live there. She says she can’t ignore her children’s woes being a mother. Anupama leaves and everyone feels tense about the situation. After some time, Kinjal tries to make Paritosh understand Anupama. She requests him to help Anupama in handling and sorting the current issues. Paritosh smiles and hugs Kinjal. He thinks if Malvika leaves by getting offended with the current issues or situation, it will be worse for him and Vanraj’s dreams.

On the other hand, Anupama feels angry with Vanraj’s attitude. She gets determined to answer Vanraj’s all challenges and plans. Vanraj also gets determined to make Anupama shell-shocked with his next step. In the next episode, Anupama will get an old rose in Anuj’s diary. Anuj will tell her that he wanted to give this rose to her 26 years ago. Anupama will tell Anuj that it’s the prettiest rose in the world. Malvika will tell Anuj that she would change the office, if Vanraj will face problems in their office. Anuj will tell Anupama that he needs to do something about Vanraj. Anupama will stop and tell Anuj that his one wrong step can make Malvika go away from him. Anuj will feel shocked and scared thinking about Malvika going away from him.

Reviewed Rating for Anupama 28th January 2022 Written Update Vanraj challenges: 5/5 This rating is solely based on the opinion of the writer. You may post your own take on the show in the comment section below.