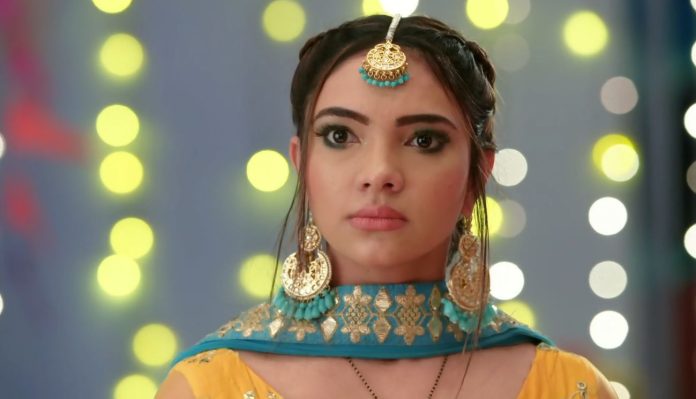 Kumkum Bhagya 31st January 2022 Written Update Prachi rages Ranbir takes care of Prachi. She asks him to leave her alone, she doesn’t want his care and concern, she didn’t ask his help. She asks him to not act like a hero. He asks her to stop it and let him do the aid to her burn. Rhea interrupts their argument. Prachi asks her to talk to her so called husband. She rebukes Ranbir. She doesn’t want him to pretend caring. Shahana asks Prachi why is she misbehaving with Ranbir when he is caring for her. Prachi tells that she is teaching Ranbir to value her.

Dida asks her why is she stopping Ranbir from doing the aid. She asks why is Prachi scared. Prachi doesn’t want to get habitual to Ranbir again. Aaliya agrees with Dida that Prachi is overacting, and creating a big drama. Pallavi tells that Ranbir is so good that he care for everyone, she isn’t special for him. Prachi tells that she doesn’t want anyone’s good, which will end up hurting her. She recalls the way Ranbir had doubted her. Ranbir goes to find the first aid box. Rhea looks for Ranbir. He asks Rhea not to talk to him. She asks him why is he going after Prachi. He tells that he cares for Prachi.

She tells that Prachi insulted her, he should safeguard his self respect. She can’t tolerate his insult. He asks her to go away if she is not able to tolerate. She asks him not to go to Prachi. He admits that he feels hurt seeing Prachi hurt. He takes the first aid kit for Prachi. Rhea thinks Prachi has come back for Ranbir, by failing all her plans. She wants to tackle Prachi. She wants to see and hear everything, then she will get angry and think of some evil plans.

Ranbir gets adamant that he will do the aid to Prachi. He asks Prachi to sit quiet and let him do the aid. She threatens of calling the police if he dares to touch her. Ranbir and his family are shocked. Dida asks Prachi why is she saying this, when Ranbir is worried for her. Prachi tells that she is also worried. She doesn’t want anyone to force her for anything, he can’t force her for the aid. She threatens Ranbir again. Pallavi and Aaliya ask Ranbir to leave Prachi alone.

Shahana and Dida ask Prachi why is she saying so. Prachi tells that she doesn’t want Ranbir to help her and show concern. She tells that nothing big will happen to her, she can take care of herself. She insults Ranbir. She tells that she is clearly condemning him. Ranbir asks Prachi to call the police. He angrily holds her foot to do the aid. He tells her that she can’t stop him from doing the aid to her. She angrily calls the police. Pallavi asks Prachi is she mad to call the police. Ranbir asks her to relax. Prachi informs the Inspector that a woman is abused in the Kohli mansion.

She summons the police. Dida and Shahana are shocked. Ranbir doesn’t care whatever Prachi is doing. He continues to do the aid to her foot. Prachi gives him angry stares of hatred and bitterness. Pallavi asks Vikram to do something, Ranbir is taking care of Prachi, who is irritated of him. Vikram tells that its Ranbir and Prachi’s matter, they shall sort it, it’s a husband and wife’s fight, its just a cold war. She tells that Prachi has called the police. He tells that Prachi won’t get Ranbir arrested. She gets angry on his confidence and faith on Prachi. Ranbir asks Prachi why is she staring. He does the aid and leaves Prachi’s foot. She argues with him and makes him away.

She asks him what does he want to prove that he cares for her. He tells that he indeed cares for her. They fight further and upset Dida. Pallavi asks Ranbir to stop the madness. He tells that Prachi is creating a drama. Prachi stands on her hurt foot and stumbles. Ranbir holds her out of concern. They share an eye lock. Police comes there. He tells Prachi that she can do whatever she wants. Rhea tells the inspector that Prachi has complaint against Ranbir, who was caring for her.

Aaliya asks Inspector to take Prachi with her. Ranbir asks Prachi to complain against him now, and also gather a proof. Prachi apologizes to them. Ranbir tells the Inspector that he was applying the ointment to Prachi’s foot against her wish, because she is his wife. He tells that he did everything for his wife, he has a right to do this. Prachi gets lost in his eyes. She asks him not to provoke her. He asks her to do what she said before. He asks if she can send him to the jail. He tells that she can’t get him arrested, knowing he isn’t wrong. She tells that he doesn’t matter to her, his words and actions also don’t matter to her. He cries in sorrow.

He changes his tone and goes to Rhea to get her support. He asks Rhea to explain his stand to the police. He tells Inspector that he cares for his wife Rhea, so he has taken care of Prachi. He tells that he isn’t wrong to take care of his wife. Inspector tells that its not a crime, he can’t arrest Ranbir. Rhea tells that Ranbir is her husband. Inspector asks Prachi not to waste the police’s team next time by calling them. He advises her to apologize to Ranbir and end their issues. Ranbir asks Prachi to accept her mistake.

Reviewed Rating for Kumkum Bhagya 31st January 2022 Written Update Prachi rages: 2/5 This rating is solely based on the opinion of the writer. You may post your own take on the show in the comment section below.