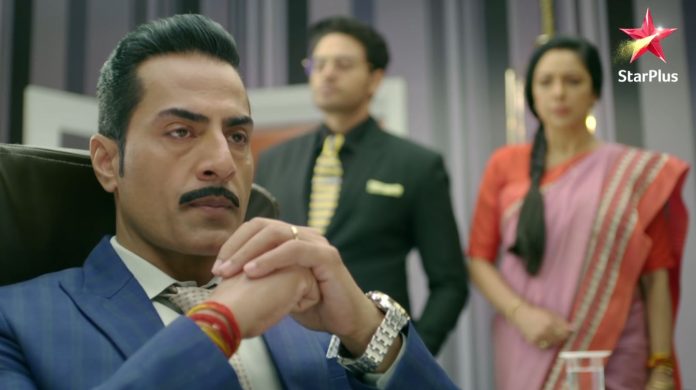 Anupama 2nd February 2022 Written Update Vanraj’s ultimatum Anuj and Anupama get engaged in a funny banter. Anupama pretends to take Anuj’s solo pics. When Anuj checks his phone, he sees that Anupama fooled him and took selfies. He follows Anupama and Anupama runs here and there. Finally Anuj stops Anupama and she apologizes to him cutely. Later Anuj takes a selfie with Anupama. They start playing badminton. Two women start talking and laughing seeing Anuj playing with Anupama. Anuj calls them “Didi” and requests them to pass the shuttle. Both women make an annoying face and pass the shuttle to Anuj.

Anuj tells Anupama that except one woman, all women are equal to his daughter, sister or mother. Anupama understands Anuj’s words and feels shy. Anupama asks Anuj if he isn’t flirting a lot today. Anuj throws the same question back to Anupama. Anupama starts coughing after hearing it. She drinks water, Anuj becomes naughty and starts throwing shuttle on Anupama’s back. Anupama feels shy and smiles. She turns and gets shocked seeing Anuj moving forward towards a dead end. In Mumbai, Malvika tells Vanraj that she isn’t feeling protected, maybe because of Anuj and GK’s absence. She says she most importantly needs Anupama.

This shocks Vanraj. Malvika tells Vanraj that even being an MBA, they can’t see what Anupama can see. In Ahmedabad, Badminton falls from Anuj’s hand as dust enters his eyes, troubling him. Anupama gets scared and runs to save Anuj. She pulls Anuj towards herself and hugs him tightly. Anuj too hugs Anupama tightly out of fear. They realize their position and step back from each other. Anuj tells Anupama that he didn’t see the chasm behind. Anupama asks him if he would have fallen down into the chasm and something would have happened to him. Anuj tells Anupama that nothing could happen to him till she is there with him. He also tells Anupama that he knows that she won’t let him fall into either chasm or in life.

Both Anuj and Anupama walk and try to relax each other. Anuj receives Malvika’s call. Seeing Anuj’s shocked expressions, Anupama too gets shocked. Anuj and Anupama anxiously wait for Malvika. Malvika enters the Kapadia house and feeds sweets to Anuj and Anupama. She tells them that she got confused about the Mumbai deal without them. Malvika says thank god Vanraj made her understand and convinced her. Vanraj’s mention angers Anuj. Anuj’s anger increases when Malvika tells that she and Vanraj are going to shift to Mumbai for their project. She says that she and Vanraj would live in a hotel till they get good flats. Malvika says she and Vanraj would continue meeting their respective families.

Anuj says to Malvika that she could have either informed him if she couldn’t ask him or took his advice. Anupama explains to Malvika that she is Anuj’s life and should have told him. Malvika says to Anuj and Anupama that she is informing them first after finalizing the deal. She asks Anuj, why is he finding a problem now as she earlier also used to work and roam without informing him. Anuj tells Malvika that earlier she used to work and roam alone without informing him but now she is working and roaming with his biggest problem Vanraj Shah. Malvika asks Anuj why he is talking to her in this tone.

At Shah house, Kavya ignores Vanraj when enters their room. Vanraj throws a file in front of Kavya and tells her that he is going to Mumbai. He also tells Kavya that he is shifting to Mumbai too and she can’t follow him there like she started job in the same office as his. Kavya tells Vanraj that she may or may not reach Mumbai but won’t go away from his life. This shocks and angers Vanraj. At Kapadia house, Malvika asks Anuj why he has so much problem with Vanraj. Malvika asks Anupama if she told Anuj that she feels for Vanraj. Anuj tells Malvika that he overheard her and Anupama’s conversation. Malvika asks Anuj to not cover up for Anupama.

She requests Anuj and Anupama to understand that feeling for someone isn’t wrong. Anuj tells Malvika that the problem is that Vanraj is a married man, father to three children and is in a fight with his second wife. Malvika tells Anuj that he also loved Anupama even when she was married and is a mother to three children. She reminds Anuj that he loved and waited 26 years for Anupama. She says that she heard his and Anupama’s story from GK. Malvika asks Anuj if he didn’t love and support Anupama without saying, telling, expressing and expecting anything in return. She further asks Anuj what is the problem if she is doing the same. Malvika asks Anuj why is it right if he does and wrong if she does the same.

Anuj tells Malvika that he never had a problem with her business partnership with Vanraj. He also tells Malvika that he wouldn’t have a problem even after seeing her and Vanraj’s relationship turning personal. Anuj says that he suspects Vanraj’s intentions and can’t trust him. Malvika tells Anuj that he is being unfair as he doesn’t know Vanraj properly. He asks Anupama if she heard that Malvika got to know Vanraj fully in so less time which they couldn’t in so many years. Anuj says fantastic Malvika. He requests Malvika to try understanding him, that he knows someday Vanraj’s real face would get revealed. Anuj tells Malvika that he can’t trust Vanraj with her. Malvika tells Anuj that she can’t change her decision because of his distrust in Vanraj.

Anuj further tells Malvika that he can even fall in her eyes to save or protect her. He tells Malvika that she can think anything about him but he won’t let her work with Vanraj anymore. Anuj orders Malvika to break her business partnership with Vanraj the next day. Anupama gets worried seeing the growing tension between Anuj and Malvika. In the next episode, Anupama will tell Vanraj that he is playing with Malvika’s heart. Vanraj will tell Anupama that he isn’t interested in trivial matters like love. He will further tell Anupama that his vision is just on his goal. Malvika will come and say that Vanraj is right. She will also tell Anupama that Vanraj isn’t at fault. Vanraj will smirk initially but will get shocked when Malvika will say that she is breaking her partnership with Vanraj.

Reviewed Rating for Anupama 2nd February 2022 Written Update Vanraj’s ultimatum: 5/5 This rating is solely based on the opinion of the writer. You may post your own take on the show in the comment section below.