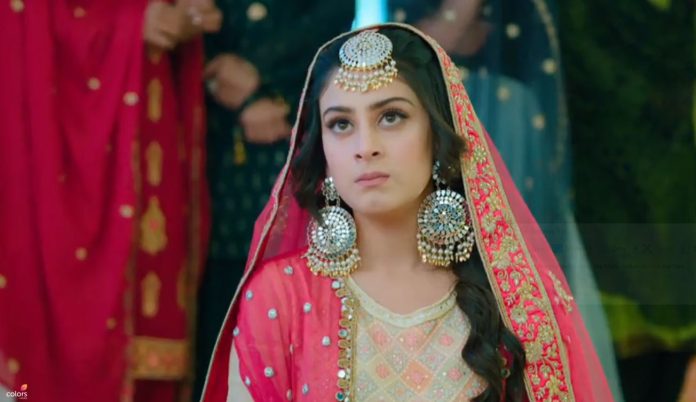 Udaariyaan 3rd February 2022 Written Update Wedding twist Virks make Fateh ready as the groom with their sinking hearts. Fateh is also very unhappy. Gurpreet does his tilak, while Khushbeer makes him wear the Pagdi. Jasmin arrives as the happy and excited bride to finally win Fateh, her crazy ex-lover, who is no more interested in her. She still wants to marry him, just to make his life hell. She wants to punish Fateh for his huge fake marriage drama. Fateh knows that life won’t be easy from here. He wishes that Tejo doesn’t come to witness the sight of his marriage with Jasmin. He doesn’t want her to get hurt. He just loves Tejo, and regrets that he loved Jasmin before.

Jasmin doesn’t find Tejo with Sandhus, when they come to bless her in the wedding against their wish. She demands them to bring Tejo to attend her wedding. She wants Tejo to see her marriage happening with Fateh and cry. She shouts on Amrik and asks him to go and bring Tejo. She declares that she won’t sit in the mandap until Tejo comes. Both the families get worried by Jasmin’s expected demand. Everyone knows that Tejo would be very hurt if she attends the wedding. Will Tejo arrive to fulfill Jasmin’s demand? Will twists will come in Jasmin’s wedding? Keep reading.

Earlier in the show, Khushbeer and Gurpreet have an emotional talk before Fateh’s destructive marriage. She apologizes to him that she didn’t care for him. She tells that she is his wife first and respects him a lot, and then she is a mother of her children. He hugs her and reciprocates her love. She tells that they will tolerate Jasmin for the sake of their children. Fateh is upset. Buzo suggests that they get Jasmin kidnapped and demand her to give the evidence against Amrik. Fateh knows that Buzo wants to help him some way, but he can’t commit a crime to hide another one. Buzo wishes that a miracle happens and Fateh gets his love. Tejo visits the Gurudwara and prays for Fateh.

Jasmin awaits Tejo in her wedding. Tejo is praying at the Gurudwara for Fateh’s problems to end. She meets Angad and asks him if he has found some way to save Fateh from this unwanted marriage. Angad tells her that there is no way to save Fateh from Jasmin now, because they aren’t able to find any loophole or evidence against Jasmin in Amrik’s case. He tells that he has tried hard to find a proof, but he couldn’t. He apologizes to Tejo that he couldn’t keep his promise. Tejo still awaits a miracle to happen, when all the doors of hope are getting shut for her. Jasmin troubles the family when she realized that Tejo didn’t come in her wedding. She commands them to get Tejo else she won’t be sitting in the mandap. She tells that Tejo would be crying in Gurudwara and praying a lot, but this time, her prayers won’t be useful.

She laughs on Tejo’s fate. She asks Amrik to bring Tejo, else she will create a havoc. The families get worried and bear her tortures, while Tejo stops Amrik from going anywhere, saying she has come on her own to attend her sister’s wedding. Tejo arrives there and shocks Jasmin. She stays strong and is ready to face anything for Fateh’s sake. Tejo goes to meet Fateh. The couple meets and cries a lot, sensing their separation. Fateh didn’t wish her to come and undergo this pain. He wanted her to stay away from Jasmin. Jasmin dances in her wedding and brings a baraat for Fateh. She is excited to marry Fateh, who breaks down and shares a moment with Tejo. Fateh feels he will never be able to see Tejo again, because of his marriage with evil Jasmin. Fateh consoles Tejo, who encourages him. They both share their sorrow, while Jasmin acts selfish and unconcerned for her own family. Sandhus feel ashamed of Jasmin.

Jasmin insults Tejo a lot in front of the families. Tejo stays strong to answer her back. She doesn’t want Jasmin to win. She handles the situation well. Jasmin goes to seal Tejo’s mouth with a tape when Tejo rebukes her for the wrong actions. Tejo stops her and asks her to not waste time. She asks Jasmin to get ready else she might miss the mahurat. Fateh feels shattered with the thought that he is marrying Jasmin, who was once his dream, but not anymore. He regrets that he loved her, because she has given him nothing but just fear and insecurities. He doesn’t want to marry her, but cries on his helpless fate. She tells Buzo that he always thought of Jasmin, even when he married Tejo, but it was his mistake. He regrets that she is troubling his entire family now. He thinks of Amrik and gets worried. Buzo asks him to not break down.

Amrik feels guilty seeing Fateh in pain. He apologizes that he had been a coward, and couldn’t save Fateh from Jasmin. He tells Fateh that he is responsible for this day. Fateh asks him not to worry for him. He makes Amrik promise that he will always keep the family united and take care of them. Amrik promises him. Amrik feels sorry seeing Fateh and thinks what he can do to help him. Fateh meets his family, who makes him decked up in the Sehra and bless him while he is going to make a sacrifice by marrying Jasmin. Fateh is sorrowful. He cries when the family goes away. Amrik tells that he will bring Fateh. He goes to get a glass of juice for Fateh.

Jasmin goes to get ready. She meets her friends and asks them to not worry for her future. Sweety advises her to keep Fateh happy since Jasmin loves him. She asks Jasmin to stay happy with her in laws and keep them happy. Jasmin wants revenge on them. She asks Sweety not to lecture her and just have fun in the wedding. She gets decked up and praises her own beauty. She tells that she will be the groom today and Fateh will be her bride. She performs in her baraat. Fateh and Tejo shed a lot of tears, recalling their best moments of their marriage. Jasmin happily dances on her victory, while Fateh cries on his defeat. Tejo wishes a miracle happens and saves Fateh from Jasmin. The families lose all the hopes and compromise to accept Jasmin for Fateh and Amrik’s sake. Stay tuned for the groom swap twist when Amrik replaces Fateh in the mandap and married Jasmin.

Reviewed Rating for Udaariyaan 3rd February 2022 Written Update Wedding twist: 4/5 This rating is solely based on the opinion of the writer. You may post your own take on the show in the comment section below.