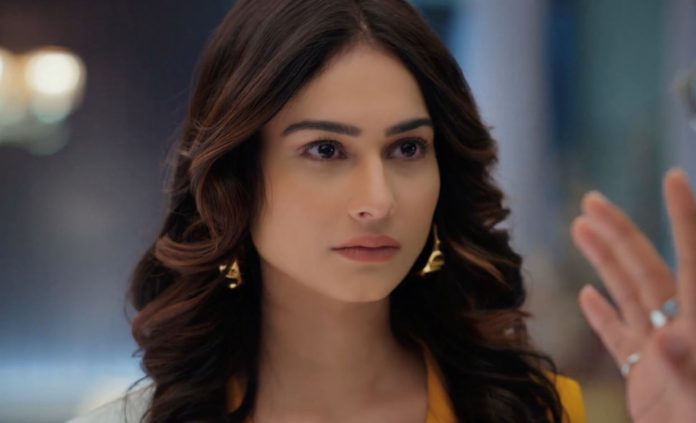 Anupama 3rd February 2022 Written Update Malvika shocks Anuj Anupama tries to calm an angry Anuj. Anuj asks her to not stop him as he is very angry. Anupama explains to Anuj that brothers just fear that their sisters won’t get hurt. Anuj asks Anupama how he should explain Malvika. He says Malvika can be angry with him and live alone but would get hurt if she grows closer to Vanraj. Anuj says he won’t let Malvika get hurt or break down again. He decides to make Vanraj understand peacefully and decently first. Anuj says he would make Vanraj understand in an indecent way if he doesn’t understand peacefully. Anupama gets worried.

Anuj says Vanraj is doing everything even after knowing about Malvika’s past. He says Malvika’s feelings are genuine but Vanraj is using her innocence cleverly for his evil motives. Anuj further says he won’t let Vanraj hurt Malvika like he did with Anupama and Kavya. He tells Anupama that he won’t let Vanraj create any issues in their life further. Anuj tells Anupama that she won’t stop him from talking to Vanraj this time. Anupama tells Anuj that she would talk to Vanraj before him and asks him to not stop her. Anuj agrees with Anupama. Anupama feels angry thinking that Vanraj didn’t stop putting fire in her life.

Malvika recalls Anuj telling her that she is most precious to him in his life. She also recalls Anuj asking her to break her partnership with Vanraj. Malvika thinks that she has to do something about the present situation. Next morning, Vanraj stops Anupama from entering Shah house. He tells her that he was waiting for her only. Vanraj also tells Anupama that Anuj understands her but he (Vanraj) knows her. Vanraj indirectly asks Anupama how much amount she and Anuj are going to give him to leave Malvika. On the other hand, Anuj feels worried knowing that Anupama and Malvika both are not at home. He suspects Vanraj.

He tells Anupama that he isn’t interested in petty matters like love. Vanraj says he is clearly focused towards his goal. He tells Anupama that Anuj can be her prince charming but he is still the real hero of this story. This angers Anupama. Anupama takes out her phone and sends Malvika’s Psychiatrists contact number to Vanraj. She asks Vanraj to consult the Psychiatrist for himself. Anupama tells Vanraj that this Psychiatrist’s treatment may end his misconception. Baa and Bapuji get worried seeing Vanraj and Anupama’s argument. Vanraj tells Anupama he is the villain who is stronger than every hero. Anupama tells Vanraj she tried to make him understand in every way but he can’t understand anything.

Anupama warns Vanraj to be in limits with Malvika otherwise she would forget her limits of respect. Vanraj laughs evilly and tells Anupama that she is talking like Malvika’s sister in law. He also tells Anupama that she reached her in-laws house without marriage. Vanraj calls Anuj and Anupama’s love story a modern one. Anupama tells Vanraj that her and Anuj’s love story is just like Radha Ji and Krishna Ji. She tells Vanraj that she can’t explain her and Anuj’s pure love to an evil person like him. Anupama again warns Vanraj to stay away from Malvika. Vanraj tells Anupama that he can’t stop Malvika, like she couldn’t stop Anuj. He says both Malvika and Anuj are similar to each other.

Anupama tells Vanraj that there is no one like him in the whole world. She asks Vanraj to stay back if he doesn’t want any trouble in his work and goal. Vanraj tells Anupama that he can’t step back as he didn’t show any dreams to Malvika or made any promises to her. Malvika comes and says Vanraj is right. She says Vanraj is not at fault and the latter smirks. His smirk turns into shock when Malvika says she is breaking her partnership with Vanraj. On the other hand, Anuj realizes that he shouldn’t have said so much to Malvika. He further thinks that Anupama would get crushed between him and Vanraj. Anuj thinks that he should have been more careful.

Malvika apologizes to Vanraj for her decision and says that she won’t ever break her friendship with him. Vanraj asks Malvika the reason behind her decision. Malvika says nothing matters to her more than her brother’s decision. She says she loves Anuj the most in this world. Vanraj gets angry and asks Malvika if he is a toy for her and Anuj. He asks her about his dreams, efforts and career. Vanraj calls Malvika idiotic child woman. He tells Malvika that nobody would give a toy in her hand but he gave her his dreams and career in her hands. Vanraj calls Malvika an idiotic sister of impractical brother. Anupama gets angry. All this turns out to be Vanraj’s dream.

Vanraj tells Mavika that he respects her, Anuj and their relationship. He tries to manipulate Malvika against Anupama by telling her that Anupama provoked Anuj against them. He tells Malvika that Anupama didn’t like their partnership from the beginning. Vanraj says Anupama and Anuj are trying to ruin his life together. He pretends innocence and asks Anupama why she has a problem with him moving on in life. Vanraj asks Anupama till when their rivalry, and her hate continue for him. He also asks Anupama till when she will punish him. Vanraj reminds Anupama that he already apologized to her for his behavior towards her and asks her what he did now. Anuj comes and tells Vanraj that he did what he shouldn’t have.

Paritosh asks Shahs to let him go before the problem rises. Bapuji asks Paritosh to let the matter rise once for all. He says Vanraj always creates problems everywhere and always interferes in Anupama’s life. Baa says Anuj, Malvika and Anupama are at fault too this time. Bapuji asks Baa to not make him expose Vanraj so that his children forget to respect him. He says Vanraj is a stock of mistakes. Bapuji tells Baa they can point fingers at others when their own son is at fault. He says everything can get alright if Vanraj changes into a nice person. Anuj tells Vanraj that he understands his efforts and dedication and thus is funding his project. He tells Vanraj that being professionals, they should keep personal and professional lives separate.

Anuj tells Vanraj that they should not complicate their already complicated lives anymore. Vanraj looks at Anupama and says finally a blank cheque came. Malvika apologizes to Vanraj and asks him to grow the business alone. Anuj feels relaxed. Vanraj agrees saying that if Anuj and Anupama want this only. He goes to Malvika and manipulates her into asking Anuj to prove his brotherly love for her. Anuj and Anupama get shocked and angry hearing Vanraj’s words.

In the next episode, Vanraj will ask Malvika if she can break her partnership on Anuj’s saying can he do the same by breaking his partnership with Anupama on her saying. This will increase Anuj’s anger. Vanraj will think that now only Malvika can stop his game from getting ruined. Malvika will ask Anuj if he can leave Anupama for her. Anuj and Anupama’s eyes will gleam with tears, while Vanraj will smirk.

Reviewed Rating for Anupama 3rd February 2022 Written Update Malvika shocks Anuj: 5/5 This rating is solely based on the opinion of the writer. You may post your own take on the show in the comment section below.