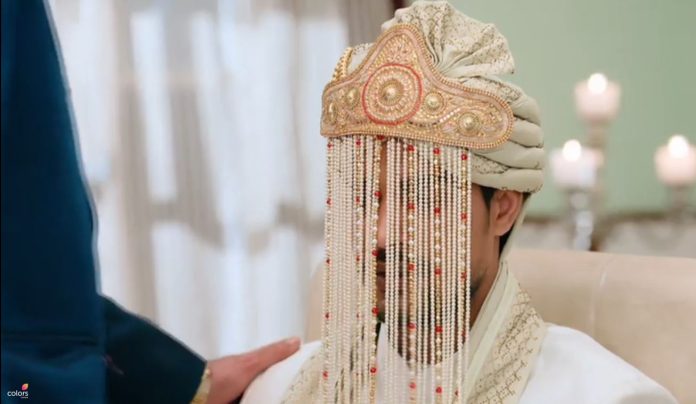 Udaariyaan 4th February 2022 Written Update Groom revealed Tejo goes to Fateh’s room to shed tears in his memory, thinking he is gone to the mandap already. She sees something at the back of the bed and goes to see. She is shell shocked to see Fateh lying unconscious there. She can’t believe that the groom in the mandap isn’t Fateh, but someone else. She sees Fateh’s clothes and realizes that Amrik has gone to the mandap wearing Fateh’s sherwani and sehra. Jasmin and the groom get married. Jasmin happily takes the blessings of the family, announcing that finally she has become a Virk family bahu.

She asks her groom to lift the sehra and show his face to her, after all she didn’t see his face since morning. The groom lifts the sehra and shows his face, leaving her moved to the core. This becomes the shock of the decade for Jasmin. It will be revealed that Amrik had spiked the juice drink for Fateh to turn him unconscious and make him away from the marriage mess. Amrik will be saving Fateh and Tejo’s future, knowing they love each other crazily. How will Jasmin cope up with this huge twist? Keep reading.

Earlier in the show, Jasmin goes to get ready. She meets her friends and asks them to not worry for her future. Sweety advises her to keep Fateh happy since Jasmin loves him. She asks Jasmin to stay happy with her in laws and keep them happy. Jasmin wants revenge on them. She asks Sweety not to lecture her and just have fun in the wedding. She gets decked up and praises her own beauty. She tells that she will be the groom today and Fateh will be her bride. She performs in her baraat.

Fateh and Tejo shed a lot of tears, recalling their best moments of their marriage. Jasmin happily dances on her victory, while Fateh cries on his defeat. Tejo wishes a miracle happens and saves Fateh from Jasmin. The families lose all the hopes and compromise to accept Jasmin for Fateh and Amrik’s sake. Stay tuned for the groom swap twist when Amrik replaces Fateh in the mandap and married Jasmin.

Jasmin asks Virks to welcome her in the wedding. She tells that she is the groom and Fateh is the bride who will be wearing the sehra and hiding his face. She commands Tejo to perform her aarti, while she dances and happily gets inside the house. Tejo ignores her misbehavior for the sake of Amrik. Jasmin irritates one and all. She tests their patience. She goes to the mandap and gets to see her groom. She sits down and makes the marriage rituals begin. Jasmin tells her groom that its not a fake marriage this time, everything is real and even the pandit is real, who would chant the real mantras.

She tells him that this time, their marriage will happen at any cost. Tejo goes away to cry. She tells Mahi that she has come to support Fateh when his bad time is starting. She tells that Virks will be seeing a tough time from now, and she wants to be with them to support. She shows her strength, despite the fact that her heart is so breaking down seeing Fateh marrying Jasmin. Simran and Mahi sympathize with Tejo and hug her. They witness the marriage.

The entire family is unhappy, but stay silent. Jasmin still calls Tejo there to witness the marriage and insults her a lot in front of both the families. She tells that she wants Tejo to watch the wedding rounds and also shower the flowers on her. Tejo obeys her orders silently and cries. Tejo wished that some miracle happens and stops the marriage. She gets disheartened when the marriage completes. She thinks she has to accept the fate some way.

Rupy and Satti also tolerate the insult, while they perform Jasmin’s Kanyadaan. Tejo helps Jasmin in getting the Kanyadaan done. She gets enough of the sorrow. She runs from the wedding hall. Tejo goes away to Fateh’s room to shed tears of sorrow. She misses him and recalls their moments. She hears a phone ringing and looks around for it. She is shocked to see Fateh lying there. She can’t believe it. Jasmin boasts of her marriage with Fateh. She insults the family again by her demeaning words. She gets her pictures clicked with the groom.

She is shocked when the groom lifts the sehra and shows his face. Jasmin is in disbelief, and so is the family. They can’t believe that Amrik has married Jasmin. Jasmin gets raging, while Amrik falls tensed. He gains courage and tells that he failed her evil plan, she got married to him, not Fateh. Jasmin loses her cool. He tells that Fateh isn’t here, Jasmin is now his wife. He tells her that she had to become the bahu of Virk family and now she has become that, she should be happy. Jasmin is in shock. She rebukes him for the huge mess. Jasmin wants Fateh to come and answer her.

Tejo gets Fateh to consciousness and asks him what happened with him. Fateh tries to recall. He recalls the way Amrik had insisted him to have the juice. He realizes that Amrik has taken his place in the mandap. He goes to see Amrik. Jasmin denies to accept the marriage, but Amrik shouts that she has to accept it, because he is fulfilled her conditions, she got the half property share already as she demanded and she also become the bahu of Virk family. He reminds her that she never took Fateh’s name when she told her conditions. He calls it a fair game. Jasmin angrily goes to slap him, but Fateh intervenes to stop her. Jasmin is frustrated.

Amrik stays strong and faces her. She threatens that she will kill him. She tells Fateh that he can’t protect his brother, who is too terrified of her. Fateh tries to defend Amrik. Tejo finally intervenes and slaps Jasmin to put an end to her loud madness. She asks Jasmin to just stop it. Jasmin’s anger knows no bounds.

Reviewed Rating for Udaariyaan 4th February 2022 Written Update Groom revealed: 5/5 This rating is solely based on the opinion of the writer. You may post your own take on the show in the comment section below.