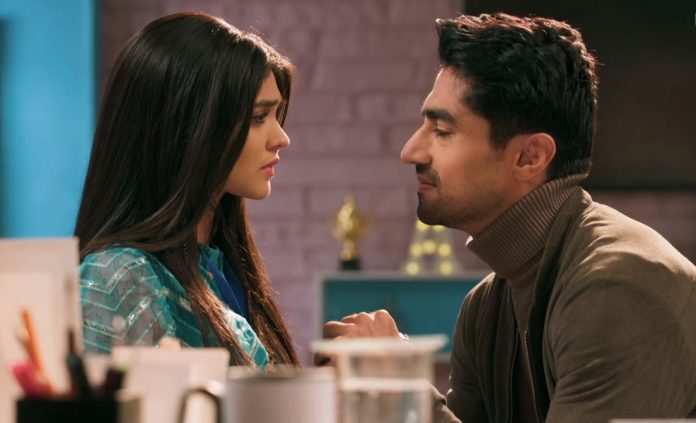 Yeh Rishta 4th February 2022 Written Update Akshara confronts Abhimanyu gets angry after Anisha’s call. He wonders why all problems enter his life. Harshvardhan tells his family that it’s good that Akshara resigned from Birla hospital. He asks if a guitar player can run their hospital. Mahima thinks Akshara could have been the power key to her in Birla house but Harshavardhan is ruining her whole game. He says he fired Akshara softly but she instead handed him her resignation letter. Harshvardhan says Akshara suffered insults because she dreamt bigger than her ability or talent.

He reminds Harshavardhan that the person he is insulting means a lot to him. Abhimanyu tells Harshavardhan that his behavior angers him a lot and provokes him to break things. He requests Manjiri to not stop him. Abhimanyu apologizes to Anand and Mahima for his decision. He warns Harshvardhan to not scream on or trouble Manjiri for his decision or force her to convince him for something. Abhimanyu says he will resign after performing his left surgeries and completing some pending works within two days. He leaves after apologizing to Manjiri and sending his resignation to Harshvardhan. Akshara thinks that she would have to get used to waiting for Abhimanyu as he will remain busy with his work in future too.

She gets shy after realizing what she said just now. Neil calls Akshara and tells her that some issues happened and Abhimanyu needs her. Akshara asks Neil to clearly say what happened. Neil explains to Akshara that some issues, arguments happened and Abhimanyu decided to leave Birla hospital. He tells Akshara that now only she can do something. Neil requests Akshara to handle Abhimanyu. Akshara gets worried hearing all this. On the other hand, Abhimanyu can too be seen worried. He hears Akshara’s voice and runs towards her. Past moments of Abhimanyu running towards Akshara’s voice is also shown in the flashbacks. Abhimanyu finds Akshara and lays his head on her shoulder.

Akshara continues singing and caresses Abhimanyu to calm him. Abhimanyu caresses Akshara. Akshara caresses Abhimanyu like a kid. Abhimanyu relaxes on Akshara’s shoulder with his eyes closed. On the other hand, Parth and Neil requests Manjiri to talk to Abhimanyu. Parth says everything else is alright but Abhimanyu’s decision of leaving the hospital isn’t right. Manjiri tells Parth that Abhimanyu was tolerating everything for her otherwise he feels suffocated in Harshvardhan’s presence. She says being a father Harshvardhan should have respected Abhimanyu’s feelings. Manjiri asks Parth what was the need for Harshvardhan to speak ill against Akshara.

Manjiri says Harshvardhan should at least know to respect women. She says Abhimanyu tried many times to make Harshavardhan understand to respect others feelings. Manjiri tells Parth that Harshvardhan never respected her even. She says that she doesn’t know if Abhimanyu’s decision is right or wrong but is proud that Abhimanyu has her values instead of his father’s. Manjiri says that whatever Abhimanyu is doing is absolutely right. On the other hand, Abhimanyu and Akshara spend some romantic time with each other. They drink Fenugreek seeds juice (methi dana juice) together and make faces.

Abhimanyu tells Akshara that he is feeling very bad. He explains to Akshara that he feels more bad when Harshavardhan or anyone speaks ill against her, Manjiri and Neil. Abhimanyu says Harshvardhan doesn’t care about anyone’s emotions but his ego. Akshara asks Abhimanyu to think one more time. Abhimanyu says fights/arguments and love happens and after that the person should step forward instead of thinking about anything. He asks Akshara to not worry as being a doctor he can serve people from anywhere and can start afresh. Akshara laughs when Abhimanyu tells her that she already started afresh by treating her first patient, that is him.

Abhimanyu asks Akshara to always stay happy and smiling like this. He tells Akshara that both of them will work hard and earn a little amount for themselves. Akshara jokingly tells Abhimanyu that she will take monthly advance salary from him. She kisses Abhimanyu’s forehead. Abhimanyu naughtly asks Akshara to take annual salary in advance from him. Akshara gets shy and runs away. Abhimanyu follows her. Both of them spend happy and romantic time with each other. Abhimanyu and Akshara lies in each other’s arms on the ground and gets lost in each other. Akshara asks Abhimanyu if he is tense due to any other problem too. Abhimanyu recalls Anisha’s bleeding wrist. Before he could tell anything to Akshara, he gets a surgery call.

Akshara asks him to go, realizing that he has to complete his pending work before resigning from Birla hospital. Both of them show a cute attitude (tashan) to each other and leave their separate ways. Akshara wishes that she and Abhimanyu always remain happy and together. Later Abhimanyu surrenders his identity card to Anand alone so that people can’t talk ill about Birlas. Upset, Anand goes to receive his call. Aarohi says “All the best ” to Abhimanyu. She tells Abhimanyu that she sorted out everything with Akshara. Aarohi further says that she made a decision to focus on her career and future only. She thanks Abhimanyu for whatever he taught her under him.

Aarohi forwards her hand towards Abhimanyu. Abhimanyu doesn’t shake Aarohi’s hand. He requests Aarohi to try treating Akshara better as she loves her a lot. Abhimanyu leaves saying, “All the best ” to Aarohi. Aarohi goes behind Abhimanyu to give him his stethoscope. She feels Akshara is very lucky to have Abhimanyu, hearing his caring words on call. But later Aarohi gets shocked when Abhimanyu asks the other person on call to stop showing tantrums and blackmailing him. Abhimanyu tells the caller that he would reach “Maa Ji” cafe at 2 PM to meet her. Aarohi thinks about whom Abhimanyu was talking to and calls someone.

Later, Abhimanyu meets Anisha at the cafe and checks her wrist wound. Anish asks Abhimanyu to relax as she is fine. Aarohi meets Akshara and tells her whatever she heard Abhimanyu talking to another girl. Akshara refuses to believe Aarohi. Abhimanyu tells Anisha that many problems would get created if everyone would get to know about her. Anisha says she would kill herself. Abhimanyu requests Anisha to stop her nonsense. He reminds her how he managed everything for her but she doesn’t listen to him. Anisha tells Abhimanyu that she doesn’t know anything. Akshara refuses to see what Aarohi wants to make her see. Aarohi tells Akshara that she doesn’t care about what Abhimanyu is doing. She suggests Akshara to see what Abhimanyu is doing with another for her love for him. Akshara goes into thinking.

Reviewed Rating for Yeh Rishta 4th February 2022 Written Update Akshara confronts: 4/5 This rating is solely based on the opinion of the writer. You may post your own take on the show in the comment section below.