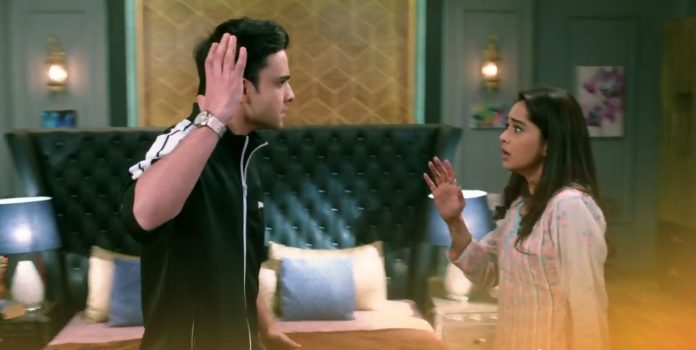 Kumkum Bhagya 7th February 2022 Written Update Ranbir rages Aaliya and Pallavi speak to Rhea. Aaliya asks Rhea to pack her bags and prepare to go on honeymoon with Ranbir. Rhea is surprised. Prachi and Ranbir get into a heated argument. Prachi reminds him that he assumed her to be characterless, he had suspected her to have an affair with Siddharth, he had pointed a finger on her character. She asks how could she tell him about her pregnancy knowing his reaction. She tells that he would ask the next question about the baby’s father. She adds that he will ask her if the baby’s father is Siddharth, if she got pregnant with Siddharth’s baby.

Ranbir can’t tolerate this. He asks her to stop it. He angrily raises hand to slap her, when her words get intolerable to him. She gets scared and steps back in tears. Ranbir wants to hear that the baby belongs to him. He doesn’t want to argue with Prachi and stress her in the state of pregnancy. Will Prachi tell Ranbir about his baby? Will her pregnancy news ruin Rhea’s honeymoon plans? How will Rhea, Aaliya and Pallavi react when the pregnancy news gets known? Keep reading.

Earlier in the show, Prachi worriedly checks the drawer keys. He asks her did she hide the keys. He takes the keys from her hand. He tells that she locked the drawer for a purpose. She asks him what is he saying. She commands him to leave her room. Ranbir confronts her about the medicines. She doesn’t want to answer him. He tells that he knew she won’t answer him, so he found all the answers himself. He shows her the information on the laptop screen. He tells that the medicines are taken by a pregnant girl. He angrily rebukes her. Prachi gets into a huge argument with Ranbir. She reminds that he tagged her character before and would suspect her to be carrying Siddharth’s child. Ranbir gets raged at her.

Ranbir confronts Prachi about her pregnancy. He asks her to answer him. Prachi asks him what is he asking, he is just telling her to confess. She tells that its his nature to always tell things, he didn’t ask her about her affair with Siddharth, but just asserted it as a fact that she has an affair with Siddharth. He asks her not to bring Siddharth’s matter in between at this time when he wants to know about her pregnancy. She tells that Siddharth’s matter will always be between them, because he got it in between, both the matters are related to her, he is still pointing at her character. He asks her when did he comment on her character now.

She reminds him that he called her characterless when he saw her with Siddharth, and now he thinks she is pregnant, and he will say the same thing that link her with Siddharth. She tells that he will ask her about the baby’s father, and also ask if she is carrying Siddharth’s baby. Ranbir angrily raises hand on her and stops. He apologizes to her for his mistake. He tells that he should have never blamed her character. He knows that she won’t be able to forgive him all her life, but he will still apologize to her all his life.

He regrets that he couldn’t become the best husband in the world, as she gave him that title in the past. He breaks down into tears. Prachi also cries seeing him crying. He tells that he has always blamed her in the past and broke their faith, if she trusted him today, then she would have told him the truth that they are pregnant. She says we are not pregnant and tries hard to cover the truth. He asks her not to lie. She tells that she has always tried to avoid the pregnancy. He asks her not to lie to him, she can kill him, but not say such harsh words that she never wanted to conceive his child.

She makes her words more bitter and hurtful. She tells that she doesn’t want his child, who would be just like him. She adds that she likes to stay away from him, she is frustrated, she is happy that she has no link with him now. She makes him believe her lie. She also feels hurt to hurt him. She asks him to forget his dreams which are just impossible to accomplish. Ranbir and Prachi shed tears of sorrow. He hurts himself in anger.

Aaliya informs Rhea about the honeymoon surprise. Pallavi asks Rhea to decide the destination and she will make the bookings. Rhea tells that its too early, Ranbir has started caring for her, she wants some time and doesn’t want to upset him, he will flee away if they shock him. She doesn’t think it’s the right time. Pallavi asks her to think of her relationship than his reaction. She asks Rhea if she wants this or not. She tells that she will convince Ranbir for the new beginning. Rhea tells that she wants the new beginning, but doesn’t want it in haste. She doesn’t know how he reacts to this honeymoon talks. She tells that there is no need to rush.

Pallavi and Aaliya have tension because of Ranbir and Prachi’s closeness. They ask Rhea to go right away, else it can get too late. Pallavi asks Rhea to trust their decision. Rhea asks what’s the tension they are feeling. Pallavi assures that she will inform Ranbir about their decision. Rhea gets glad, but tensed of his reaction. Dida asks Ranbir where is he running away. Ranbir tells that he has an important meeting, he has to do work to run his family. He gets Dida’s blessings.

Ranbir meets Shahana and tells about the blunder. He tells that he saw her medicines in Prachi’s room and thought she is pregnant, he confronted Prachi and made her too upset. Shahana feels guilty of hiding the truth. He sees Prachi coming there. Pallavi meets Ranbir to tell him that her friends are laughing on her, her image is getting tarnished because of him, everyone knows about his marriage with Rhea, her friends want Rhea and his reception party. She asks him to help her in making her image clear.

She tells that she got the tag of a conservative mother-in-law, who didn’t send her son and Bahu on honeymoon. Ranbir understands what she is thinking. He tells her that he is ready to go on honeymoon with Rhea. He is much hurt by Prachi’s harsh words that she would never fulfill his baby dream. Ranbir asks Rhea to accompany him to Manali for their honeymoon. Rhea is surprised with his positive reaction and agrees to go with him, leaving Prachi disappointed. Stay tuned.

Reviewed Rating for Kumkum Bhagya 7th February 2022 Written Update Ranbir rages: 3/5 This rating is solely based on the opinion of the writer. You may post your own take on the show in the comment section below.