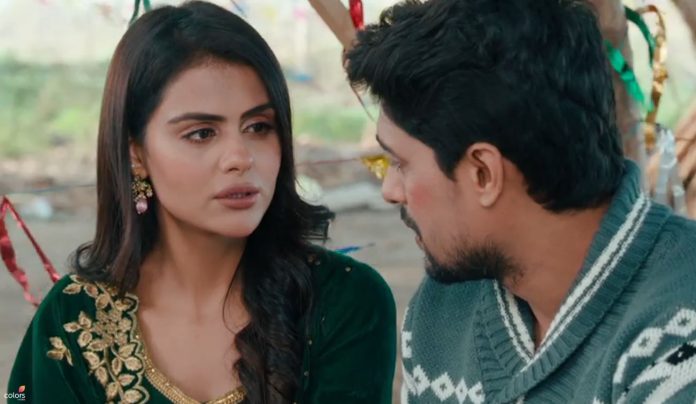 Udaariyaan 5th February 2022 Written Update Fatejo united Amrik tells Fateh and Tejo that he wants to see them united. He adds that they have rights and freedom as well to get together. He asks them to start a new life, since they have got rid of Jasmin after many difficulties. He asks them to not waste the golden opportunity which they got, and make his sacrifice pay off by getting married. He tells that he wants them to stay happy, and that can happen when they unite. Fateh and Tejo get emotional. They feel happiness that their dream union got possible because of Amrik, and are equally worried for Amrik’s future because of Jasmin. The Virks and Sandhus also get emotional. Tejo wishes Rupy forgives Fateh and lets her unite with Fateh.

Amrik stays strong and faces her. She threatens that she will kill him. She tells Fateh that he can’t protect his brother, who is too terrified of her. Fateh tries to defend Amrik. Tejo finally intervenes and slaps Jasmin to put an end to her loud madness. She asks Jasmin to just stop it. Jasmin’s anger knows no bounds.

Fateh and Tejo get together after Amrik makes a big sacrifice for completing their love story. Fateh cries and hugs his brother for making such a big sacrifice for his sake. Amrik tells that he had to take this step to save Fateh’s life from destruction. He couldn’t see the injustice happening with Fateh. He tells that everything is happening because of his fears, and he didn’t want Fateh to pay a price by losing his love. He unites Fateh and Tejo, making Khushbeer very proud of him. Khushbeer hugs Amrik who has won over his fears and took a stand for his brother.

He tells that he will always protect Amrik. Fateh also wants to protect Amrik from Jasmin, who can do anything in her madness. Satti wants Jasmin to leave from Tejo’s life. Rupy doesn’t think Jasmin will spare Tejo. He doesn’t want Tejo to stay in Fateh’s life and invite problems in the form of Jasmin. He wants Tejo to marry Angad and move on in her life. He tells that he wants Jasmin away from Tejo. Satti and Rupy worry for Tejo.

Fateh speaks to Tejo and shares his concern about Amrik. She asks him to accept the happening as their destiny and tells that everything that happened was not less than a miracle, for which she prayed a lot at the Gurudwara. Fateh finds peace talking to Tejo, who understands him well. Jasmin troubles Amrik and leaves him scared of him. She doesn’t want him to act as her husband. She goes to occupy Fateh’s room, which she always wanted. She makes Fateh out of the room. She asks Amrik to stay away from her and sleep on the couch. Amrik follows her orders to keep peace at home.

Simran advises Fateh to unite with Tejo, because he is free to marry Tejo now, after all Amrik has helped him get rid of Jasmin. She asks Fateh to accept this as fate and not let Tejo go away this time. She encourages Fateh to propose Tejo. Later, Fateh and Tejo sink in their memories and shed tears. They don’t know what’s lined up for them. The Virks worry for Amrik a lot. Khushbeer asks Gurpreet not to get scared for Amrik, who has learnt to stand for himself. Even Biji thinks the sorrow has changed Amrik totally and turned him strong. Gurpreet stays worried to see Amrik. Jasmin calls Khushbeer’s friends home. She announces her Mu Dikhai rasam.

She asks the family members to give her special gifts if they want her terror to calm for some time. She commands Gurpreet to give her the necklace which she had kept for Tejo. She threatens the family. The guests congratulate Fateh for the wedding, but the latter discloses that Amrik has got married to Jasmin. The Virks shower the gifts on Jasmin to keep her mouth shut, but Jasmin still goes on to humiliate Fateh in front of everyone, by calling him her ex-husband.

She demands a gift from him. Other side, Tejo meets Angad and informs him about Amrik and Jasmin’s marriage. He is amazed to know this and thinks of Jasmin’s fury. He asks Tejo to pursue Fateh for marriage. He wants Tejo and Fateh to unite, but Tejo is afraid for Virks first. She doesn’t want Jasmin to ruin Virks in anger. Angad assures that he will find a way to get Jasmin under control. Tejo gets Fateh’s resignation cancelled. She wants Fateh to join the college back.

She thinks of taking his rejoining letter with her to Virk house so that she can see the family once again. She wants to see if Jasmin is troubling them. Tejo lands up at Virk house only to get badly humiliated by Jasmin. Jasmin keeps her condition that Tejo will never enter Virk house from now. She throws out Tejo in front of Fateh and Virks. Tejo is left in tears. Stay tuned.

Reviewed Rating for Udaariyaan 5th February 2022 Written Update Fatejo united: 5/5 This rating is solely based on the opinion of the writer. You may post your own take on the show in the comment section below.