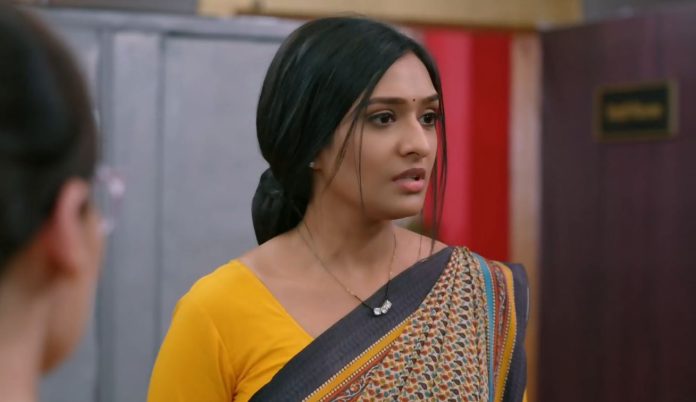 Bhagya Lakshmi 7th February 2022 Written Update Huge drama Malishka takes Rishi with her to pretend that she is done with her shopping and wants to show the chosen designs to him. She wants him to be on her side when she accuses Lakshmi for the theft. She asks Rishi to see the heavy necklace she bought for her wedding. She tells that its an amazing design and she really loved it. She asks Rishi if he likes it too. She opens the box and faces it towards him. She tells that its really gorgeous. Rishi tells that there is nothing in the box, so he can’t say about it. Malishka summons Kalyani and all the staff. She tells that someone from the staff has stolen her necklace, who had been eyeing the necklace since a long time. Lakshmi doesn’t understand what’s happening. Kalyani calms down Malishka.

She tells that she will get the staff checked right away. She asks Malishka is she okay with it. Malishka asks her to go ahead and check the lockers of the staff too. Lakshmi isn’t scared of the check, and goes ahead to get her bag. Kalyani finds the necklace in Lakshmi’s bag. Malishka reacts in anger as she planned this herself. She accuses Lakshmi for stealing her necklace. She asks Kalyani to call the police and get the thief Lakshmi arrested. Lakshmi gets worried and turns to see Rishi, who leaves from there, feeling really odd and embarrassed of Malishka’s drama. Rishi finally takes a stand for Lakshmi and takes the theft blame on himself, leaving Lakshmi and Malishka shocked.

Earlier in the show, Ayush wishes Rishi and Lakshmi unite. He knows that Rishi is innocent, and so is Lakshmi. He prays that Rishi gets to see Lakshmi’s love. Lakshmi gives a toffee to Rishi. He tells that he isn’t a little kid to eat toffee and forget his pain. She tells that the toffee wrapper will help him in getting the ring removed. He apologizes to her. He realizes that she cares for him, when he has hurt her a lot. She asks him to move on, he isn’t the same and even she isn’t the same, they are out of their illusion. She removes the ring finally and goes. Rishi turns sad.

Ayush asks Rishi did he talk to Lakshmi. Rishi tells that he is feeling a heartbreak for the first time. He feels he is a bad person to snatch Lakshmi’s smile. Ayush cries hearing Rishi’s cry. Rishi tells that he can never forgive himself. He knows that Lakshmi will never forgive him, she had told him that their paths are different, everything is over between them. He really feels he is very bad because he has fallen in her eyes. He tells that he doesn’t hate Lakshmi, he feels like lost. He hangs up the call. Ayush cries for his brother.

Rishi cries for Lakshmi. Malishka thinks of Karishma’s plan. She asks Rupali to pack the jewellery and make the bills ready. She checks a pendant. She wants to know where do the staff keep their bags. She asks Lakshmi does she like her choice. Lakshmi tells that Malishka should know it herself. Malishka taunts her for making her choice as her own. She asks Lakshmi which necklace does she like. Lakshmi selects the bridal necklace. Kalyani hears their conversation. Malishka thinks to steal the necklace from the counter and put it in Lakshmi’s bag.

She makes a silly excuse to know about the staff’s bags kept in the staffroom. She tells Rupali that she is free now, she can accompany her to the staffroom. She goes with Rupali and fools her. Malishka gets lucky to find Lakshmi’s locker and the bag in few seconds of time. She puts the necklace in Lakshmi’s bag. She asks Rishi to come with her and see the necklace she has chosen. She tells him that even Lakshmi liked it. Malishka shouts and pulls up a big drama when Rishi tells that there is no necklace in the box.

Malishka asks Kalyani to question Lakshmi, who would have stolen the necklace. She tells that she doubts that Lakshmi has stolen it deliberately. Kalyani doesn’t know if the new joinee Lakshmi can be trusted. Rishi asks Malishka to calm down. Malishka tells that she can’t lose the necklace. Kalyani asks her to calm down, maybe the box has got misplaced. Malishka asks Kalyani to return her money if she can. She threatens that she will call the commissioner. Kalyani asks her to stop calling the police. Malishka recalls Karishma’s plan.

Rishi doesn’t like the search drama. Rishi gets a call and goes out, asking Malishka to come out when she is done. Malishka wanted him to see Lakshmi’s humiliation. Kalyani checks the staff’s bags one by one. She calls Lakshmi. Ayush tells Rishi that everything will be fine soon. Rishi tells that there is a big drama happening in the jewellery store. He reveals about the jewellery theft. He thinks of Lakshmi, if she is under trouble. Rishi gets locked in the washroom. Rishi realizes that Malishka will take revenge on Lakshmi.

He tells Ayush that he will call him back. He rushes out, and finds the door locked. Malishka recalls Lakshmi’s taunts. She thinks her revenge is fulfilled now. Kalyani finds the necklace in Lakshmi’s bag. Lakshmi is shocked to find it. She tells that she didn’t do this. she starts yelling at Lakshmi to humiliate her. Lakshmi defends herself. Malishka asks Kalyani to call the police and get Lakshmi arrested. Karishma has assured Malishka that she will never let Lakshmi get the bail once her arrest happens. Stay tuned.

Reviewed Rating for Bhagya Lakshmi 7th February 2022 Written Update Huge drama: 5/5 This rating is solely based on the opinion of the writer. You may post your own take on the show in the comment section below.