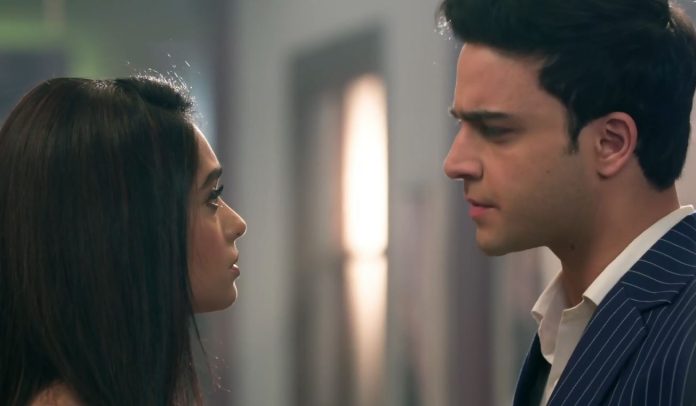 Kumkum Bhagya 8th February 2022 Written Update Ranbir’s madness Ranbir is too hurt by Prachi’s words. He tells her that he has already fulfilled two of his dreams and now he will complete his third dream. He tells that his dream of having a baby will be soon fulfilled by such a person who madly loves him, who will happily accept his dream as her own dream, who wants to become his baby’s mother by her consent and happiness. He shocks Prachi by telling her that he will go to such a person who loves him and will make his happiness her dream. He is taking this decision in anger just to hurt Prachi. He wants to give the same pain back to her, knowing she got too brutal towards him on the last night when she smashed his dreams with hatred.

Ranbir tells her that he is going on honeymoon with Rhea, who would be more than happy to conceive his child, unlike Prachi who had never wanted to conceive his child. He tells that he doesn’t have any hope and expectation from Prachi, who is a wrong person in his life. He praises Rhea, who loves him so much and is waiting for him to accept her. He challenges Prachi that she will see him fulfilling his third dream with Rhea. He asks Prachi if it still doesn’t matter to her.

Prachi pretends unaffected by his words, but in her heart, she gets too worried. She wonders if she has done a mistake by hiding about her pregnancy from him. Ranbir tells that this time he isn’t doing anything for the family’s sake, but for himself, he needs a new leap of faith in his life and Rhea is the one who would be completing his dreams. Rhea is overjoyed to have her honeymoon trip with Ranbir. She knows that Prachi will leave the house herself when she feels she has lost Ranbir completely. What will be Prachi’s next move? Keep reading.

Ranbir tells Pallavi that he was thinking to take a break from the normal life. He thanks her for the suggestion. He tells Rhea that they shall go on honeymoon and plan their family this time. his words surprise Rhea. Ranbir tells Pallavi that he will book the tickets, he knows the beautiful places in Manali, he will take Rhea to the best place. He makes Prachi jealous. Prachi is disturbed recalling his shocking statements. She still acts strong and unaffected. She tells Shahana that she doesn’t know about Ranbir’s decision. Shahana knows Ranbir. She tells that Ranbir has agreed to go on honeymoon with Rhea, because Prachi has broken his heart and angered him a lot. Prachi asks Shahana not to blame her.

Ranbir comes there and tells Shahana that Prachi is saying the truth, he also felt that Prachi loves him, but Prachi broke his illusion beautifully by clarifying that her eyes never said the truth to him. Shahana tells that she knows they both love each other. He tells that she is mistaken, Prachi has changed and so are her emotions. Shahana asks Ranbir not to judge Prachi, she is still the same, she holds the same memories, he loves her and she loves him. She asks them not to hurt each other. Ranbir tells that he never hurt Prachi. Prachi reminds that Ranbir has hurt her even if it was not deliberate. He tells that his actions might have hurt Prachi, but her words have hurt his soul, not his heart.

He adds that he can heal his heart, but not his bruised soul. He tells Shahana about his three dreams, that’s to marry Prachi, to have his start up and have a baby with Prachi. He tells that he still has the third dream unfulfilled, Prachi knew his dream well, but she said she never wanted to conceive his child, she can’t bear the burden of his child for the sake of his happiness, she doesn’t love him so much that she can love his child. He is too hurt by her words, but thanks her for helping him in fulfilling his two dreams.

He tells that he is going to fulfill his third dream with someone who wants to conceive his child happily, with the girl who madly loves him and will accept his joy as her own dreams, who understands the meaning of love, marriage and family, which Prachi doesn’t understand. He compares Rhea with Prachi, and finds Rhea more deserving of him than Prachi who doesn’t know the meaning of love. Prachi feels heartbroken. Ranbir walks away in tears.

Prachi tells Shahana that she can fight with Ranbir, but can’t see him with Rhea. She hugs Shahana and cries. Rhea happily thanks Pallavi for the best gift. She tells that she is very happy, she was scared that Prachi could come between them, but now Ranbir is just of her/Rhea, he isn’t in any guilt, he wants to start a family with her. Aaliya tells that she didn’t see Rhea so happy before. Rhea hugs Pallavi and thanks her again. Pallavi asks her to go and finish the packing soon. Rhea wants to make good memories with Ranbir. Pallavi tells that she has made the booking at her friend’s resort. Rhea tells that she was scared that Ranbir would refuse, but Pallavi convinced him easily.

Rhea goes to pack her clothes. Aaliya tells that she didn’t expect Ranbir to say yes for the honeymoon. Pallavi finds it fishy. Aaliya tells that things are okay. Pallavi gets tensed that its too good to be true. Aaliya asks her not to think much and call up her friend to book the suite. Later, Dida asks Vikram to speak to his son and stop him from making such a big mistake. She tells that Ranbir is going to make a mistake which can never be rectified, Rhea will become his wife if he makes a relation with her, then he can never return to Prachi. Vikram understands her point. He tells that he knows his son well, Ranbir can never make such a mistake, he can never have a relation with Rhea, he will realize and step back, even Rhea will understand that she can’t take Prachi’s place in his heart.

She advises Prachi to say the truth and make everything fine. Prachi tells that she has the courage to say the truth, but she can’t ruin her baby’s future, he will love her and then he will leave her, he might leave her baby as well. Shahana doesn’t think he would do this. Prachi tells that Ranbir broke her illusion by assassinating her character and separating from her, which was unimaginable for her, he can again take such a step once she reveals her pregnancy news. She tells Shahana that she can’t do anything to stop Ranbir. Rhea packs her clothes happily. Prachi sees Rhea and ignores. Ranbir makes Prachi jealous by romancing Rhea and showing his affection for Rhea. Will Prachi confess her pregnancy news? Keep reading.

Reviewed Rating for Kumkum Bhagya 8th February 2022 Written Update Ranbir’s madness: 1/5 This rating is solely based on the opinion of the writer. You may post your own take on the show in the comment section below.