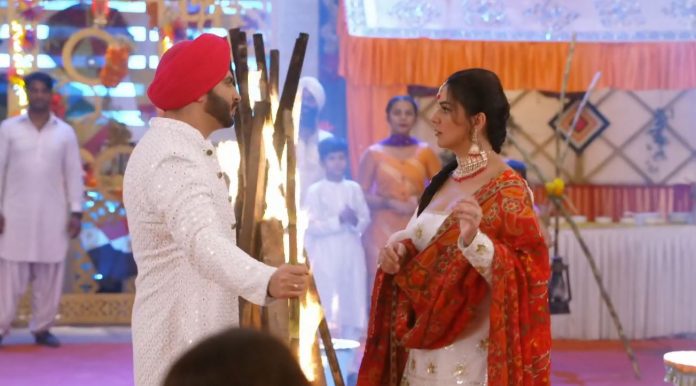 Kundali Bhagya 8th February 2022 Written Update Karan challenges Karan and Prithvi play the game in the Lohri function. Karan suggests that they play the eye blinking game. He tells that one who blinks their eyes first will lose the game. Preeta asks him not to get to happy, because he isn’t going to win. She tells that she didn’t accept his challenge. He asks her what is it, it’s a small challenge to meet his eyes and lock it for few minutes, if she can’t accept it, then what will she do if he gives her a big challenge. He mocks her to make her agree. She gets upset. Shrishti asks Preeta why is she losing the game before playing it. She tells that it’s a small challenge, Preeta has to just lock her eyes with Karan. She convinces Preeta to play the romantic game with Karan. Karan and Preeta get their fun time.

Earlier in the show, Karan supports Sameer. Sameer tells that Shrishti is showing him attitude. Shrishti tells that she doesn’t care for Sameer now. Sherlyn goes for the game and plays it with Natasha. She asks Natasha to do something that brings a smile on everyone’s face. Natasha thinks Sherlyn wants her to impress Karan. Sherlyn knows that Natasha is smart to understand her plan. Natasha asks Karan for dance. The family asks Karan to dance with Natasha.

Natasha dances with Karan closely and makes Preeta upset. Preeta is jealous, while Shrishti and Janki make plan to make Natasha away from Karan. Shrishti brings Preeta close to Karan. Karan deliberately falls in Preeta’s arms to create a moment. He tells that he was just checking if she will save him from falling down, and she passed the test.

Prithvi calls Karan for the game. Karan asks him not to shout. Prithvi gives him a dare. Karan jokes if Prithvi wants to play cricket with him. Prithvi asks Karan for an arm wrestling match. The family members get divided and cheer for Karan and Prithvi. Karan defeats Prithvi. This brings a moment of celebration for the family. Karan tells Prithvi that he never loses his challenge. He dances with his family members. Prithvi is just passing time to get the coconut bomb from Shambu. He doesn’t care for his victory or defeat. Kareena calls Sameer to give him a dare. She asks him to sing a good song. Sameer tells that he can’t sing. She asks if he has lost. He agrees to sing if they assure of not judging him. He sings a romantic song for Shrishti. Karan and Preeta also steal a stare and feel romantic.

Sameer expresses his feelings for Shrishti. The family applauds Sameer for his great singing skills. Karan goes to call upon Preeta for a dare. He tells that its an easy dare, they have to look into each other’s eyes and not blink. She refuses to accept his challenge. He stops her from going. Shrishti asks Preeta to play the game with Karan. Preeta tells that she wants a bigger challenge, not any silly little challenge. He tells that she is showing him attitude. She tells that its not necessary that she is delicate if she appears like that. He asks Sameer to get it. Sameer asks him to forget it.

Preeta tells that she will accept the challenge. Shrishti also supports her sister. She tells that they can prove that girls can do anything as the boys. Rakhi tells that girls have more courage, they keep the courage hidden in them, that’s why they are regarded weak, but girls are never weak. She asks Preeta and Shrishti to show their strength today. Sameer tells that Karan respects Shrishti, but she shouldn’t take them for granted. He jokes that girls just know to dance. Natasha taunts him. Karan and Preeta play the tug of war. Everyone cheers for the couple.

Shrishti and Sameer join the game. Gradually, all the family members join the game. Prithvi finds Shambu arriving with the coconut bomb. Sherlyn meets Mona, who tells that she gets special injections from the hospital for Mahesh. Sherlyn asks her to inject Mahesh, he shouldn’t live a normal life. Mona asks for a favor. She gets the whip to torture Mahesh like before. Sherlyn enjoys to hear Mahesh’s cry of pain. Mona injects Mahesh. Sherlyn asks Mona to message her when Mahesh gets an attack. Karan and Sameer win the game. Preeta falls into Karan’s arms, whereas Shrishti falls into Sameer’s arms. The couples get into a romantic moment.

Reviewed Rating for Kundali Bhagya 8th February 2022 Written Update Karan challenges: 5/5 This rating is solely based on the opinion of the writer. You may post your own take on the show in the comment section below.