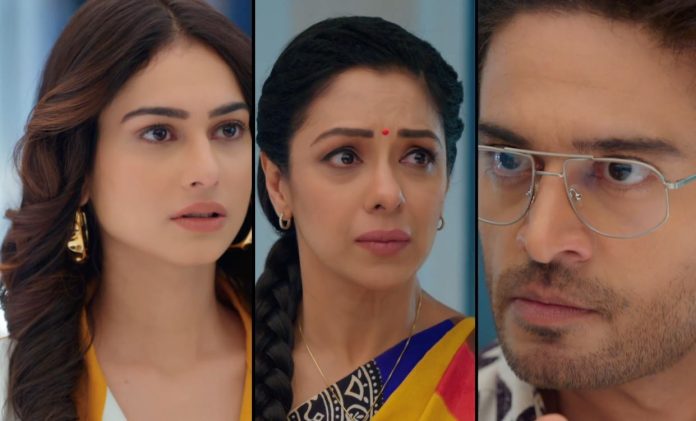 Anupama 8th February 2022 Written Update Vanraj insults Anuj Anupama tells Malvika that she came to talk about Anuj to her. She says she came to talk about Anuj who is her friend. Vanraj fears that Malvika may ruin his game and thinks of doing something. He makes a call to someone. At the same time, Paritosh tells Shahs that the office’s legal department called and told that Anuj is transferring the whole Kapadia empire to Malvika’s name. Everyone gets shocked by Anuj’s decision. Samar says what was the need for such an extreme step. Kavya feels scared thinking that now everything would be under Vanraj’s control.

At the office, Anupama asks Malvika if she wants to say something before she starts talking. Malvika asks Anupama why everyone is questioning her when Anuj did everything. Anupama tells Malvika that Anuj only loved her, nothing else. Malvika tells Anupama that Anuj loves her (Anupama) more than her (Malvika). She further says that Anuj left her (Malvika) for her (Anupama). Anupama tells Malvika that Anuj didn’t leave her but she left her intelligence and common sense. Malvika rudely asks Anupama to shut up. Anupama scolds Malvika for her misbehavior by warning her to slap her. She asks Malvika if she gave all her brain to Vanraj or if something is left.

Malvika tells Anupama that not she came in Vanraj’s words but Anuj came in her words. She tells Anupama that she doesn’t want to talk to her and asks her to leave. Anupama tells Malvika that she would have to listen to her as today it’s about her friend Anuj. Malvika asks Anupama to stop. Vanraj tries to overhear Anupama and Malvika’s conversation from outside. Anuj tries to go and talk to Anupama and Malvika but stops himself thinking that his efforts would go in vain. Anupama asks Malvika to understand that everything and everyone can change in this world but not Anuj. Malvika asks Anupama who she is to decide this. She tells Anupama that she is not seeing and not letting Anuj see the changes occurring in him.

Malvika says she feels suffocated as Anuj has problems with her, Vanraj and their everything. Anupama tells Malvika that Vanraj is great at pretending helplessness and is teaching her the same. She asks Malvika to not become indigent. Anupama further asks Malvika to become independent and run her business on her own will, not with anyone else’s support. She warns Malvika that the one who is supporting her today can make her fall/ruin her one day in future. Malvika tells Anupama that Vanraj is not like this and only she knows how he is in reality.

Anupama claps and tells Malvika that Bapuji who gave birth to Vanraj, she (Anupama) who was married to him for 26 years and Kavya who loved Vanraj for 9 years didn’t understand Vanraj properly. She asks Malvika how she understood Vanraj’s reality in just two months. Malvika tells Anupama whatever says doesn’t change that this time Vanraj is right and Anuj is wrong. Anupama asks Malvika to call the wrong person right if she feels happy in it and requests her to not announce the right person as the wrong one. At Shah house, every person feels stressed. Paritosh immediately refuses when Samar says they should go to the office.

Baa says Anuj and Malvika should name equal shares within each other to sort out the problem. Bapuji says division doesn’t happen where love exists. Baa says division is better than drama. Samar tells Baa that drama happens in their family too. He accuses Vanraj of the increasing differences between Anuj and Malvika. Baa feels offended in son’s love and says Vanraj does every wrong work in the world. Bapuji asks everyone to get quiet. Baa says that doesn’t want Vanraj and Paritosh to suffer in Anuj and Malvika’s arguments or fight. Kavya asks what about her job. Baa tells her that she can do a job anywhere. At the office, Malvika asks Anupama if she is calling her a villain.

Anupama tells Malvika that she came to tell her that Anuj is a hero. She tells Malvika that she found a real life hero in Anuj after meeting him. Anupama explains to Malvika that Anuj remained loyal to her and her memories even after staying away for 26 years. She asks Malvika after knowing all this how can she think that Anuj would be dishonest to her and leave her. Anupama explains to Malvika that her and Anuj’s relationship started before her and Vanraj entered their life. Malvika tells Anupama that her and Anuj’s relationship changed as Anuj chose her over her. Anupama asks Malvika to understand that Anuj left everything for her but won’t ever leave her.

Vanraj’s inner soul tells Vanraj that his dream would remain a dream. Vanraj tells his inner soul that his dreams would surely get successful. In his anger, Vanraj pushes and breaks a plant. Anupama tells Malvika that Anuj does everything for her. Malvika tells Anupama that Anuj’s last two decisions for her proved wrong. Anupama tells Malvika that outcomes of Anuj’s decision were wrong, not the decisions. At Shah house, Bapuji asks Baa to have some shame for thinking about her son’s benefit, when other’s relationships are breaking. Baa asks Bapuji why she should think about others instead of her own son and grandson. Bapuji tells Baa that Vanraj is trying to get successful using others.

Baa tells Bapuji that he only sees Vanraj’s faults in everything. She says Vanraj completed the project by putting in a lot of effort and suddenly Anuj asked Malvika to break her partnership with Vanraj. Bapuji reminds Baa that Vanraj asked the same to Anuj. Baa says why Vanraj should suffer alone. Bapuji asks Baa why she isn’t worried about Anupama. Baa says Anuj can take care of Anupama, why should they care. Pakhi tells Baa that if Anuj would have thought like her, then he wouldn’t have given money to Anupama to save their house and even not have saved Samar’s life. Samar asks Baa till yesterday she loved Malvika but now saying that Malvika should think about her herself. Baa says how she is at fault in whatever is happening at Kapadia house.

Kavya says they should go to the office to look into the matter. Samar and Bapuji don’t agree to it. At office, Anupama is seen explaining to Malvika continuously that Anuj’s intentions were and are never wrong. She tells Malvika that Anuj made and worked on the business for her. Malvika says she will run the business with Vanraj only as he knows business very well. Anupama tells Malvika that Vanraj has made life a business too. She says Vanraj thinks about profit and loss in everything and has started relationship deals. Malvika feels irritated and confused. Anupama asks Malvika to understand that Anuj only took care of her trust but Mr. Shah will handle her business. She tells Malvika that the person who takes care of trust doesn’t see his/her own profit at all but a person who handles business looks only at his/her profit.

Anupama requests Malvika to understand Anuj as no one is like him in this world. Outside Malvika’s cabin, Anuj and Vanraj give each other a glare. Vanraj stops Anuj and humiliates him. He continuously insults Anuj and calls him an orphan and a fool. Vanraj’s words grow Anuj’s anger. Anupama asks Malvika who leaves their business for their family. She makes it clear to Malvika she came to save Anuj and his sister’s relationship, not their business. Anupama tries to explain to Malvika that she came to save Anuj’s sister from ruining her life. She tells Malvika that Anuj tried to stop her a lot to talk to her but she failed to stop herself as it was about Anuj. Outside Malvika’s cabin, Vanraj tells Anuj that he and Malvika will grow the business successfully and prove his fear right.

Vanraj confidently tells Anuj that he would get hurt seeing his success. He tells Anuj that he and Malvika will help him in opening a store/shop in future. Anuj sarcastically thanks Vanraj and tells him that he would never be truly rich even after growing successful as he lost all his relations, especially Anupama earlier. Anupama requests Malvika to not choose Vanraj over Anuj. She tells Malvika that she will be the poorest in this world if she loses her brother.

Reviewed Rating for Anupama 8th February 2022 Written Update Vanraj insults Anuj: 5/5 This rating is solely based on the opinion of the writer. You may post your own take on the show in the comment section below.