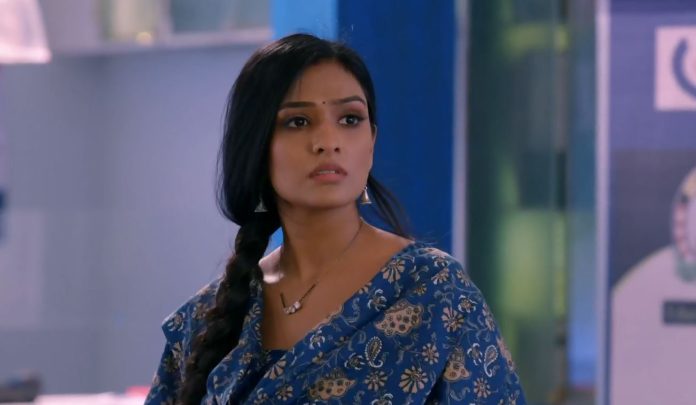 Bhagya Lakshmi 9th February 2022 Written Update Lakshmi in tears Lakshmi is proved innocent by Rishi. Kalyani apologizes to her. She calls Lakshmi to give her a reward as a sales commission for Rishi and Malishka’s jewellery purchase. She gives the bonus as a reward. Kalyani asks her to deposit the cheque in the bank. Lakshmi gets glad. She shares her happiness with her sisters at home. She tells that she will open a bank account in the nearby bank. Neelam asks Rishi not to go out on the 7th day as per the pandit’s warning. She wants him to avoid going out, but Rishi doesn’t listen. He asks Neelam to let him go, he will come back soon and also take care of himself. He asks her to trust him. Neelam grows worried. She tells Dadi that she would have not been worried if Lakshmi was with Rishi.

The bank robbers enter the bank to rob the money. Lakshmi and Shalu visit the bank. Rishi also plans to visit the bank to keep the jewellery in the locker. Rishi and Malishka head to the same bank. Lakshmi feels Rishi’s arrival and turns to see, but some people come in between and block her sight. Later, Ayush and Shalu get to see Rishi’s cards, that got swapped. They look for Rishi and Lakshmi. Rishi and Lakshmi meet once again at the bank. Rishi asks her to listen to him once. She refuses to give him a chance. She sheds a lot of tears, which makes him grow restless. Lakshmi cries seeing his I love you card.

Fate brings her close to Rishi, and she gets a dose of sorrow once again. She realizes that the valentines card is for Malishka, not her. She reads his poetry and cries a lot, thinking Rishi never loved her, but always loved Malishka. Rishi gets a sorry card for Lakshmi. He tells that there was a confusion and she got the valentines card by mistake. He apologizes to her. She tells that he is playing a big game with her, he is fooling her again. He tells that he isn’t such a bad person as she is thinking. He reasons out his marriage with her. She refuses to hear explanation. He stops her from going out, and the couple gets into a close moment.

Sonia calls up Malishka to know the outcome of the plan. Ayush calls up Rishi to know what’s happening there. Rishi tells that Lakshmi is out of trouble. Malishka speaks to Sonia and Karishma, and tells what went wrong. Rishi tells Ayush that Lakshmi isn’t giving him a chance to apologize, she is too angry and a sorry won’t be enough. Lakshmi speaks to the staff. Rupali asks Lakshmi about her love story with Rishi. She tells that she didn’t know that Lakshmi is the mystery girl who saved Rishi’s life. She apologizes to Lakshmi. She asks Lakshmi about her marriage. Lakshmi doesn’t tell that she is wedded to Rishi. She tells that Rishi is someone she doesn’t know.

Malishka tells that Rishi lied to her for Lakshmi’s sake, he doesn’t know that she kept the necklace to frame Lakshmi. She asks Karishma what is she thinking. Karishma asks her to talk to Rishi. Malishka tells that she will scold Rishi now. She gets to upset. Rishi finds her upset and rushes after her. Ayush likes the way Rishi took a stand for Lakshmi. He finds it strange that Rishi’s love story is starting after marriage, Rishi is in love with Lakshmi. He gets glad. Karishma tells that it didn’t happen as they wanted, Rishi has lied to save Lakshmi, something is wrong with him. She doesn’t want it to be true that Rishi loves Lakshmi. Rishi asks Malishka to listen to him. She asks him why did he save her.

He tells that Lakshmi didn’t rob the jewellery. He adds that Lakshmi didn’t ask for help, but he had to help her. Malishka feels he is dying to help Lakshmi always. She tells that she told wrong things about him, that he is habitual to break marriage and see other girls. He asks her if she knows why Lakshmi told that. She asks him not to defend Lakshmi, if he still loves Lakshmi. She wants to know the truth from him. He tells that he has done everything for her, to save her, he didn’t want to tell anyone the truth that she had kept the necklace in Lakshmi’s bag, he had seen her doing this and was ashamed of her. He tells that he didn’t know it before, what are her motives, then he realized what she is up to.

He tells that she would have got caught during investigations, when the police checked the cctv footage. He tells her that he loves her but he didn’t get blind, she should have not fallen to this level. He gets upset with her. Malishka apologizes to him. He asks her to stop the kiddishness. He tells that he is tired of confessing love to her, he left Lakshmi because of her, but she is still insecure. She apologizes. He doesn’t want her apology. He tells that she is making it tough for him. She tells that he isn’t wrong, but Lakshmi is shaking his conscience, she has a valid reason to vent anger because he thinks so. She knows that he is tolerating a lot, his goodness makes her feel insecure.

The couple gets into an argument. She promises to change herself with time, she would never do this. He advises her not to repeat such a thing and not become the person that she isn’t in real. He forgives her. He tells that he loves her, though he doesn’t understand her. She tells that her heart beats for him. Rupali tells Lakshmi that Rishi has some feelings for her, and even Lakshmi has the same feelings. Lakshmi denies it. She tells that he helped her maybe because of some guilt. Malishka tells that she did everything because of her love.

Rishi is in guilt that he ran to help Lakshmi by breaking the door of the washroom desperately. He feels glad that he did something to lessen his mistakes and guilt. He tells Malishka that he is thinking of Lakshmi, he should have told the truth to her before marriage, they both would have not been so shattered in sorrow. He thinks Malishka and Lakshmi are upset with him, as if he is stone-hearted. Lakshmi gets called by Kalyani and thinks if she is fired from the job. Kalyani gives her a bonus cheque for the sales. She asks her to deposit the cheque, it’s a reward for her.

The staff tells that Kalyani is impressed with her. Malishka yells at Rishi for always thinking of Lakshmi. She feels upset that he doesn’t value her. He also gets his mood spoiled because of her. He decides to not tell anything about Lakshmi to her. Lakshmi shares her joy with her sisters. She tells that she will use the money for the family. Shalu asks her to do something for herself. She asks about the bank account. Lakshmi tells that she will open the bank account.

Reviewed Rating for Bhagya Lakshmi 9th February 2022 Written Update Lakshmi in tears: 5/5 This rating is solely based on the opinion of the writer. You may post your own take on the show in the comment section below.