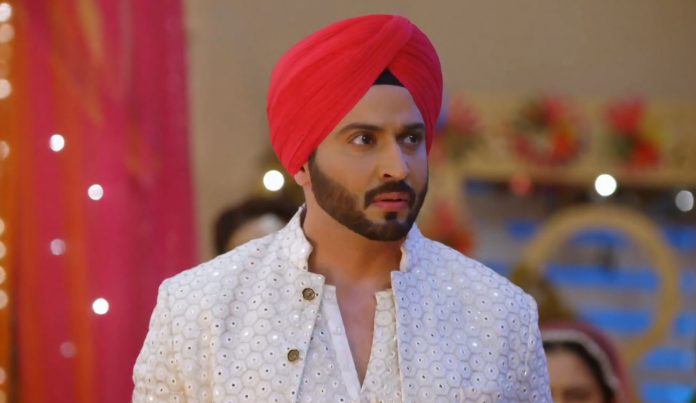 Kundali Bhagya 9th February 2022 Written Update Clued Karan Prithvi gets the coconut bomb from Shambu. He goes cleverly and replaces the coconut in Preeta’s puja plate. Naagre also attends the Lohri function. Prithvi calls up Naagre and stays away to not fall into any doubt. He shares his plans with Naagre. Naagre tells that this time Preeta won’t get saved, she will die while performing the Lohri puja. He asks about the marking on the coconut by which he can differentiate between the ordinary coconut and the explosive coconut. Karan happens to overhear Naagre’s words and gets worried for Preeta. He tries to find out the entire plan.

Prithvi stops Karan and Preeta from performing the puja together. He tells that they will not perform the puja together, just Karan will perform the puja with the family, and then Preeta will perform it in the end. Karan asks Prithvi the reason for it. He tells that he will perform the puja with his wife Preeta. Prithvi gets worried that he can’t assert the real reason to Karan. He just wants Preeta to be alone when the coconut blasts and takes her life. He thinks he shouldn’t care if Karan also dies along with Preeta. He asks Karan to go ahead if he wants. Karan gets hinted that something is wrong. He finds Prithvi’s behavior turning strange. Will Karan save Preeta? Keep reading.

Earlier in the show, Shrishti and Sameer join the game. Gradually, all the family members join the game. Prithvi finds Shambu arriving with the coconut bomb. Sherlyn meets Mona, who tells that she gets special injections from the hospital for Mahesh. Sherlyn asks her to inject Mahesh, he shouldn’t live a normal life. Mona asks for a favor. She gets the whip to torture Mahesh like before. Sherlyn enjoys to hear Mahesh’s cry of pain. Mona injects Mahesh. Sherlyn asks Mona to message her when Mahesh gets an attack. Karan and Sameer win the game. Preeta falls into Karan’s arms, whereas Shrishti falls into Sameer’s arms. The couples get into a romantic moment.

Rakhi is pleased to see them happy. Prithvi thinks Preeta will have her last win and then she will lose her life. He wants the Luthra empire and house on his name. He thinks he will be the ultimate winner. Karan winks to make Preeta lose. Preeta tells that she will not blink even if he tries is romance gestures. Karan stares in her eyes, and she stares back. He blinks his eyes and loses. Karan loses the game. Mahesh’s doctor comes to meet the Luthras. Rakhi recalls his words when he confirmed that Mahesh is mentally retarded.

Prithvi also identifies the doctor who declared Mahesh insane, because the latter’s condition was really such because of the electric shocks. He doesn’t want the doctor to examine Mahesh again and tell the family that Mahesh is recovering. Rakhi tells that the doctor treats Mahesh. Preeta tells that she will meet him at the clinic. She wonders what was Sherlyn doing inside the house till now. She meets Naagre and isn’t surprised. Naagre tells that he has come, she knows that he isn’t working for her by his wish. She tells that she doesn’t wish that, she is just keeping enemies close to know the plans. He tells that he will always find him around.

Prithvi asks Naagre to stay away and talk on phone. He calls Naagre. He asks him to stay away from Preeta. Naagre tells that he knows everything, he doesn’t want to stay with her. Prithvi tells the reason for his words. He adds that he needs Naagre in future, Preeta is in danger, he doesn’t want Naagre to die with her. Naagre asks his special plan. Prithvi tells that he has planned a coconut bomb to get Preeta killed. Naagre asks why did he make a poor plan, people can guess it easily. Prithvi tells that nobody will guess it well, Preeta will soon die when the bomb blasts.

Naagre tells that this time Preeta won’t get saved. Karan hears this and stops. Prithvi sees Karan around Naagre and asks him to get silent. He tells about Karan. Naagre changes his words to confuse Karan. Karan tells Preeta always invites enemies. Preeta tells him that she doesn’t backstab people, she didn’t make enemies, she is helpless that she is getting enemies. He asks her how will she deal alone. She tells that she has God on her side. She gets blessings from pandit, who blesses her to have children soon. Karan gives her a naughty look, and she goes away. He follows her to stay around her. Sherlyn signs Prithvi, but he doesn’t understand anything. He goes to meet Shambu and gets angry that he came so late.

Shambu tells that Kareena was around that time so he had to hide. Prithvi confirms about the real bomb. Shambu apologizes for his last mistake. Prithvi goes and changes the coconut in Preeta’s plate. He asks the pandit to make Preeta start the puja first. Pandit goes to inform the family about the mahurat. Sherlyn gets the puja plate for Preeta. Karan gets suspicious. Preeta asks everyone to come for puja. The family members perform the puja. Karan goes Preeta for the puja, but Prithvi stops them by raising an objection. Karan grows more suspicious on hearing Prithvi.

Reviewed Rating for Kundali Bhagya 9th February 2022 Written Update Clued Karan: 3/5 This rating is solely based on the opinion of the writer. You may post your own take on the show in the comment section below.