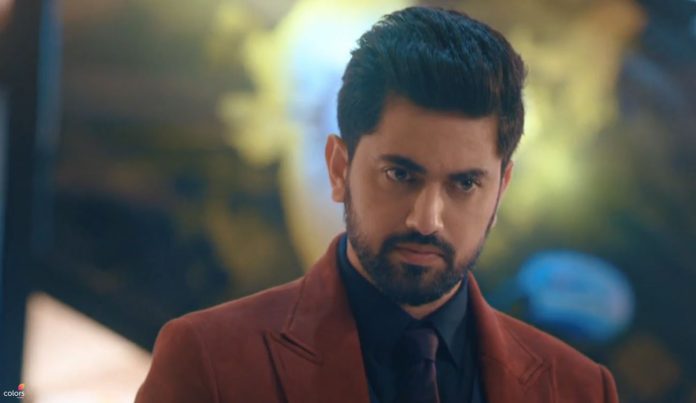 After some time, Agastya reaches Pakhi’s home. Pakhi opens the door and gets worried seeing Agastya’s hand wounded. She questions Agastya, how he got wounded. Agastya lies to Pakhi that his hand got cut because of a cutter. Pakhi asks Agastya to be careful. Agastya gives Pakhi’s whole family the gifts they wished for. Shanya thanks Agastya for giving her a laptop as a gift. Mohit gets happy when Agastya gifts an octa processor to him. Pakhi’s parents feel overwhelmed with Agastya’s gesture towards their family. Pakhi takes Agastya aside and asks him where her gift is. Agastya tells Pakhi that Ishaan wilo gifts for her, not him. When Pakhi makes a face, Agastya tells Pakhi that Mr, Snuggles keep an eye on her for him.

Agastya says small world. Ishaan brings a chair for Agastya. Pakhi, Agastya and Ishaan talk to each other. Ishaam tells Agastya that Pakhi doesn’t get tired of talking about him. Agastya tells Ishaan that since the last two days, Pakhi is only talking about him. Ishaan asks if it means he has become more important for Pakhi. He tells Agastya that it seems his importance in Pakhi’s life has ended. This angers Agastya a lot. Pakhi asks Ishaan to watch his words. Ishaan asks Pakhi and Agastya to chill as he was joking. Pakhi asks Agastya to not think much as Ishaan is habitual of joking. Angry Agastya asks Pakhi how he can approve Ishaan for her as he doesn’t like him. He tells Pakhi that she deserves much better. Agastya’s words shock Ishaan and Pakhi. Suddenly Agastya laughs and says he was also joking. Pakhi and Ishaan relax.

Ishaan goes aside to receive a call. Pakhi asks Agastya if his wound and pain is fine now. She also asks Agastya if he went to Ishaan’s hospital intentionally to understand him for her. She tells Agastya that she knows that the whole hospital would reach his home for his treatment and thus he doesn’t need to go to any hospital. Agastya tells Pakhi that she is right. He asks Pakhi how could he give her approval to any guy for her, without meeting him. Agastya tells Pakhi that he found Ishaan a good guy. Ishaan comes back after disconnecting the call. He asks if he got Agastya’s approval or passed the test. Agastya first gives Pakhi her pending gift. Pakhi opens the gift box. Both Ishaan and Pakhi get shocked seeing an expensive diamond locket.

Pakhi tells Agastya that it’s very beautiful. Agastya feels good. He stops Pakhi from thinking about his gift’s price. Agastya tells Pakhi that the gift’s sender’s intentions should be given importance, not price. He makes her wear the locket and asks her to wear it always. Flashback shows Agastya fitting his newly invented camera in Pakhi’s locket. Agastya tells Pakhi that he would always remain with her through this locket. Pakhi feels happy. Ishaan tells Agastya that he would pamper his girlfriend a lot if he can be so loving towards his best friend, Pakhi. Pakhi says it’s a good idea and also says that she will find a girlfriend for Agastya now.

While dropping Pakhi back, Ishaan asks her if Agastya intentionally came to the hospital to meet him. Pakhi tells Ishaan that he is right. She says to Ishaan that she told Agastya that he works in Trinity hospital. Pakhi tells Ishaan that Agastya is very protective towards her. Ishaan asks Pakhi if Agastya is protective or possessive about her. Pakhi asks Ishaan if he is getting insecure due to Agastya. Ishaan asks Pakhi that he wonders how Agastya didn’t fall for her after spending so much time with her. He tells Pakhi that he feels something off with Agastya’s way of seeing her and giving her expensive gifts.

Pakhi gets angry and asks Ishaan if he is angry because Agastya gifts her expensive things. She tries to leave Ishaan but the latter apologizes and stops her. Ishaan tells Pakhi that he said whatever he felt but maybe he could be wrong. Pakhi tells Ishaan that he is wrong. Ishaan tells Pakhi that they are having their relationship’s first fight on 7th february 2022, 10:48 PM. Pakhi gets confused. Ishaan gets a little romantic with Pakhi. He covers his and Pakhi’s head in his jacket in between the street. Pakhi too gets closer to Ishaan. Agastya gets angry seeing all this through his hidden camera inside Pakhi’s pendant. His anger grows.

Later, Anup records Ishaan dropping Pakhi outside the house. Ishaan tells Pakhi that she won’t get any sleep today’s night. Pakhi leaves telling Ishaan that he is cute. On the other hand, Natasha calls Agastya and asks him how was his meeting with Pakhi. She tells Agastya that he can share his problems with her as she is his friend. Irritated, Agastya asks Natasha to get his tomorrow’s meeting schedule ready. He also tells Natasha that he chooses his friends himself. Later Agastya gets angry seeing Natasha lying on his bed in an inappropriate condition. Natasha tells Agastya that Pakhi doesn’t understand his value but she very well understands him. She also tells Agastya that he would get alone if he continues running after stupid Pakhi.

Agastya ties Natasha and blindfolds her. Natasha feels good thinking that Agastya wants to get close to her. Agastya tells Natasha that it’s his passion to punish/hurt the person who speaks against “his Pakhi”. He forcefully grabs Natasha towards his secret room. Natasha gets scared and asks Agastya to leave her. In the next episode, Ishaan will fall from a height. Worried, Pakhi will run to him. Agastya will be seen talking to Pakhi on call. He will intentionally hurt himself. Pakhi will get worried about him hearing a gunshot on call. She will ask what type of sound it was. Pakhi will get into a dilemma being worried about both Ishaan and Agastya. Agastya and Ishaan both will be seen in immense pain.

Reviewed Rating for Fanaa 8th February 2022 Written Update Agastya breaks limits: 4/5 This rating is solely based on the opinion of the writer. You may post your own take on the show in the comment section below.