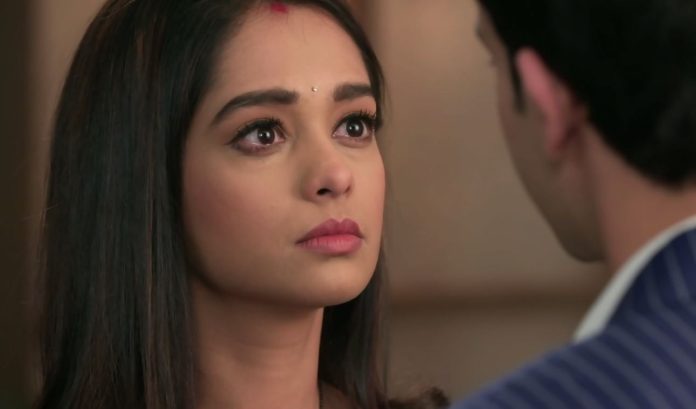 Kumkum Bhagya 10th February 2022 Written Update Unexpected Prachi Rhea tells Prachi that very soon she/Rhea will unite with Ranbir, and then Prachi will lose her family completely, she will be losing her husband and also her parents. She tells that Prachi will be nothing more than an orphan, who has no family member with her. Rhea gets ready to leave for her honeymoon trip. She takes Aaliya and Pallavi’s good wishes. She doesn’t find Prachi in her room. Aaliya wonders where did Prachi go, if she isn’t in her room. Rhea tells that maybe Prachi has accepted her defeat. She mocks Prachi, that Prachi has left the battle and ran away. She feels she has won the battle and also her love Ranbir. Aaliya tells that its good for Prachi that she left.

They think Prachi might be sobbing somewhere and imagining Ranbir and Rhea’s honeymoon moments. Rhea gets surprised when she finds Prachi waiting for her near the car. Prachi also challenges Rhea to spoil her mood. She tells that her challenge starts from here with the honeymoon trip. She adds that she just spoiled her honeymoon mood. She asks Rhea to think all the way about her plans to delay her honeymoon. Rhea gets upset when Prachi taunts her. Pallavi tells Aaliya that they shall take an advantage of Ranbir’s absence, and teach a lesson to Prachi. Aaliya agrees with her. While the duo plan against Prachi, the latter is already planning against Rhea. What twists will come in Rhea’s honeymoon highs? Keep reading.

Earlier in the show, Prachi wants to see Rhea’s upset face. Rhea accepts her challenge. She tells that Ranbir will father her child soon. Prachi doesn’t think this would happen. Pallavi and Aaliya are happy for Rhea. They both love Rhea, and want Rhea to stay happy with Ranbir. Pallavi tells that she invited her friends for the tea party. Aaliya feels Rhea will be happy now. Pallavi tells that Ranbir was drunk and fell asleep in Prachi’s lap, the reality is that he is with Rhea, he has seen Prachi’s real colours and will forget her. Aaliya tells that Ranbir will give her a grandchild soon. They await the good news. Rhea tells that Prachi will not have any support from anyone. She tells that Pallavi also doesn’t regard Prachi her bahu.

Rhea tells that Pallavi and her relation is of a heart, and even Ranbir has such hearty bond with her, they just love her. Prachi tells that Pallavi and Ranbir like Rhea, because they dislike her/Prachi. Rhea calls it a good reason. Prachi tells that it’s the right reason, Rhea can never have a competition with her. She insults Rhea. Rhea calls it enough. She tells that Ranbir and she will be together on their first night and Prachi will be an orphan, having no relation of her own. She asks Prachi to enjoy until she comes back. She advises that Prachi can stay on the roads, because even Sushma isn’t going to shelter Prachi now. She tells that she can help her with a good suggestion, Prachi and Shahana can get a shelter in the police station lockup.

Prachi gets much upset with the thought of losing Ranbir. She feels restless in her room. She goes to Dida’s room to meet her. Dida hugs her. She tells that Ranbir will realize his mistake and come back without having her honeymoon. Prachi tells that she will not let Ranbir enjoy his trip. Dida asks why did Shahana lie then that Prachi won’t stop Ranbir from going out. Prachi tells that she had decided to not stop Ranbir and Rhea, but Rhea had angrily provoked her, and now she has challenged Rhea that Ranbir and Rhea won’t be celebrating their honeymoon. Dida asks what will she do. Prachi tells that she will plan something. She adds that she is doing this to defeat Rhea and win the challenge, not because of her feelings for Ranbir.

She gets the hotel address and goes. Dida and Shahana get to realize what Prachi told about her love. They know that lovers are liars, Ranbir and Prachi love each other but won’t confess. Prachi comes back and finds them laughing on her love denial. She tells that she will make the plan without any team. Shahana and Dida ask Prachi not to lie to them, and accept that she loves Ranbir. Prachi tells that she doesn’t love Ranbir, she is doing this just to win the challenge. Dida asks her to hurry up. Prachi misses Ranbir and cries. Ranbir thinks of her hurtful words. He decides to go away from Prachi so that she stays happy. Prachi doesn’t want him to go away. She tells that she won’t let Rhea take him away.

Rhea wants to take Ranbir away from Prachi, so that they unite forever. Ranbir wants to show Prachi that he has moved on. He thinks if he has hurried up with the honeymoon plans. He realizes that he might have made a mistake. He meets Prachi, who rams into him and falls in his arms. They get into a moment. She refuses to take his help. He tells that he doesn’t want to help her. Her nuptial chain gets stuck in his coat. He helps her and lets her go away. He thinks he has to move on, but his heart is stopping him. She doesn’t want to forget what he did to her. She tells herself that Ranbir means nothing to her. Pallavi wishes good luck to Ranbir and Rhea. She blesses them to stay happy.

Aaliya also gives her best wishes. Dida shows her unhappiness to Ranbir. Vikram asks Dida to stay happy, and let Ranbir and Prachi sort their issues. He is hopeful that everything will get fine. Rhea tells that she is very happy because she is going with Ranbir. Pallavi and Aaliya give their tips to Rhea. Rhea looks for Prachi. She wonders what is Prachi up to. Dida taunts Rhea to spoil her mood. Rhea goes to check Prachi’s room by making an excuse. She thinks its better that Prachi has gone away before she could see them leaving for honeymoon.

She is glad that her enemy left the battle ground. She is still mentally prepared to face Prachi. Prachi gets to hear Rhea’s words. Pallavi asks Vikram to see off Ranbir and Rhea. Vikram tells that he has to make an important call. Rhea tells Aaliya that she had gone to check Prachi, who isn’t anywhere. Aaliya can’t believe this. They laugh that Prachi has left when she got defeated. They see Prachi in front of them. The sight causes a new worry to Rhea.

Reviewed Rating for Kumkum Bhagya 10th February 2022 Written Update Unexpected Prachi: 3/5 This rating is solely based on the opinion of the writer. You may post your own take on the show in the comment section below.