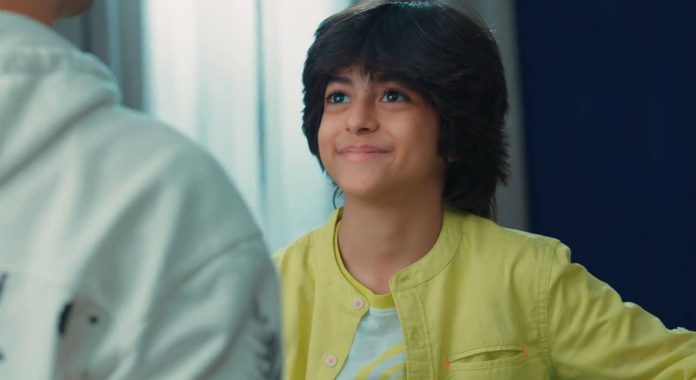 Bunty makes an excuse and goes aside. He thinks that maybe this way Saaransh can bring Rudra and Prisha closer again. Bunty thinks that it’s a good idea to reunite Rudra and Prisha. Saaransh again asks Bunty if he would help him in bringing Ruhi to Delhi. Bunty replies yes and tells Saaransh that it’s not easy. He says he doesn’t know if Ruhi’s mother would agree or not. Saaransh tells Bunty that this is why he is going to Rohtak. He asks Bunty if he would accompany him. Bunty thinks that there would be a problem if Saaransh will see Prisha alive in Rohtak. He tells Saaransh that Ruhi’s parents wouldn’t take him seriously as he is still a young kid.

Saaransh says he knows that elders don’t take kids seriously even if kids show maturity. He tells Bunty that his lawyer will talk to Ruhi’s parents, not him. Bunty feels happy and tells Saaransh that his idea is a good one. They leave for Rohtak together. At Khurana Mansion, Rudra apologizes to Sharda for drinking a lot. He says he drinks a lot because he can’t handle Ruhi being away from him. Sharda asks Rudra what she and family should do about it as their heart also breaks seeing him like this. She asks Rudra if he thought about his family members. Sharda also asks Rudra if he ever thinks about Saaransh. Rudra tells Sharda that he isn’t able to tolerate that whom he thought was his daughter (Ruhi) turned out to be Yuvraj’s daughter.

He asks Sharda to understand his condition. Sharda tells Rudra that a person needs to move on from the bitter truth. She also tells Rudra that he is ignoring his own son Saaransh in his attachment towards Ruhi. Sharda tells Rudra that when he should handle Saaransh, Saaransh is handling him like his father. She asks Rudra to perform his responsibilities towards his own son Saaransh. Rudra tells Sharda that he realized his mistake. He goes with Sharda to apologize to Saaransh but finds him missing from Khurana Mansion. A maid servant tells Sharda that Saaransh left in the morning. Rudra and Sharda wonder where Saaransh went. Sharda tries calling Saaransh.

On the way, Saaransh asks Bunty why he doubts that Ruhi’s mother won’t agree for her scholarship. He says Ruhi’s parents are weird as they don’t want a good education for Ruhi. Bunty stops from telling Saaransh about Ruhi’s father. He tells Saaransh that Ruhi’s mother doesn’t want to come to Delhi as her bad past is related to Delhi. Saaransh asks Bunty what is Ruhi’s mother’s profession. Bunty tells Saaransh that Ruhi’s mother is a doctor and may reject their scholarship offer only because of her bad past related to Delhi. Saaransh recieves Sharda’s call and lies to her that he is helping his friend in a project. Sharda asks Saaransh to take care of himself. After knowing this, Rudra tells Sharda that he would apologize to Saaransh for his mistake.

He also asks Sharda to not be worried as he won’t forget his responsibilities now, for sure. In Rohtak, Saanchi, Veena and Saanchi’s mother decide to have their last lunch together. Saanchi takes Ruhi to meet their friends for the last time. Ruhi’s friend gives her friendship bands and “miss you” cards to her. Ruhi thanks them and says Goodbye. Saanchi and Ruhi cry and hug each other in pain of getting separated. Ruhi runs in Bunty’s arms seeing him. She gets sad knowing that Rudra didn’t come to meet her. Saaransh comes outside of the car. Both Ruhi and Saaransh get shocked seeing each other. Saaransh tells Bunty that Ruhi helped him when he was in trouble. On knowing that Prisha is going away with Ruhi, he takes Saaransh and Ruhi with him to Prisha.

They reach Prisha’s home. Bunty thinks that Prisha should not know that he and Saaransh are in Rohtak. He asks Mr. Batra (Saaransh’s lawyer) to talk to Ruhi’s mother alone. Ruhi points out her mother. Saaransh mistakens Veena as Ruhi’s mother. He wishes that Ruhi’s mother accepts his scholarship offer for Ruhi. Mr. Batra meets Prisha. He tells Prisha that he came on behalf of Khurana School. Mr. Batra tells Prisha that Ruhi’s whole livelihood and education expenses will get covered in their scholarship offer. Prisha gets shocked hearing Khurana School. She recalls that it’s the same school that Rudra opened in memory of Rajeev. Angry Prisha asks Mr. Batra if Rurda sent him here. Mr. Batra says no. She refuses to believe Mr. Batra’s words and makes a call to Rudra.

Rudra picks up. Prisha asks Rudra why he is offering scholarship for Ruhi when he initially said that he doesn’t want to see her face. Rudra gets shocked and says he didn’t do this. Prisha refuses to believe Rudra’s words. She tells him that he can’t keep Ruhi with him forever even if he has got attached to her. Rudra again says he doesn’t know anything about it. Prisha asks Rudra why he sent his lawyer Mr. Batra to her. She asks Rudra to not try entering her life again. After Prisha disconnects the call, Rudra decides to know who did this. Prisha requests Mr. Batra to leave. Mr. Batra leaves, giving Khurana School’s trustee’s (Saaransh) contact number to Prisha. He also asks her to contact the trustee, if she changes her decision.

Veena sees Prisha in tension. Rudra calls Mr. Batra, and asks him who sent him to Ruhi’s mother. Mr. Batra tells Rudra that he can’t refuse Saaransh as he is also one of the trustees. Rudra tells Mr. Batra that he can’t do whatever Saaransh says as Saaransh is a kid, not an adult. Everyone gets sad, when Mr. Batra tells them that Ruhi’s mother refused the scholarship offer. Ruhi leaves the car, getting sad. Prisha thinks why Rudra is making the situation more difficult for her. Veena asks her why she is worried. Prisha tells that Ruhi got a good scholarship offer from Khurana School. She tells Veena that she is sure that Rudra is doing all this to keep Ruhi near him. Veena asks Prisha how she is related to Rudra and why she is trying to keep Ruhi away from Rudra.

Reviewed Rating for Yeh Hai Chahatein 9th February 2022 Written Update Saaransh stunned: 4/5 This rating is solely based on the opinion of the writer. You may post your own take on the show in the comment section below.