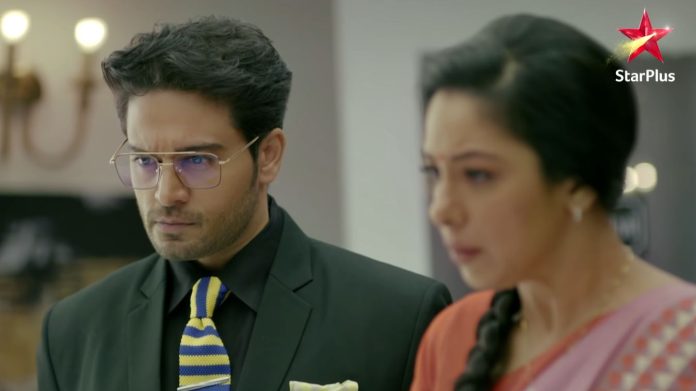 Anupama 10th February 2022 Written Update Live in twist Anupama gives coffee to Anuj. Anuj takes and thanks her. He apologizes to Anupama for snatching office life from her. Anupama tells Anuj that everything happened due to Vanraj, not him. She further tells Anuj that she is responsible for all this as Vanraj entered his life due to her. Anuj tells Anupama that he will never forget the last coffee of Kapadia office. Anupama says she would also not forget it and both of them cheer their mugs. Both of them get emotional and pray to God for keeping Malvika safe. Anupama also prays to God to give her the strength to handle Anuj.

On the other hand, Malvika also breaks down and Vanraj just looks at her unaffected. He places his hand on Malvika’s shoulder with evil intentions. Anupama asks Anuj if he thinks that whatever he did was right. Anuj replies that he just knows that whatever he did in the past was wrong. He says we can care for the one we love but can’t make any decisions for them. Anuj says he broke Malvika’s heart twice by making wrong decisions for her twice. Anupama tells Anuj that he did whatever he thought was right for Malvika. Anuj says his decisions turned out to be wrong. He further says only Malvika has the right to make decisions for herself.

Anuj tells Anupama that he doesn’t want Malvika to look at him or wait for him before making any decisions. He says till he would be there for Malvika, the latter won’t be able to make her own decisions. Anupama says according to her it’s not right to go away from Malvika. Anuj says he is doing everything for Malvika’s betterment. He says it’s time for Malvika to become Kapadia Empire’s lone owner. Anupama tells Anuj that his thinking is right, but she is worried about Vanraj’s intentions. Anuj tells Anupama that he made a hidden limit line (Lakshman Rekha), which nobody would be able to cross ever. Anupama relaxes a little and prays to God to keep Malvika safe.

Guard of the Kapadia office greets Anuj by saying, “Good Afternoon, Kapadia Sir”. Anuj asks him to call him just Anuj. Anuj leaves his CEO name plate and 500 rupees with the guard. Malvika and Vanraj watch Anuj and Anupama from inside the office. Malvika turns her face being emotional. Anupama gives a smirking Vanraj a glare. Vanraj waves bye to Anupama. Anupama holds Anuj’s hand and leaves. Anuj asks Anupama where he should go. He says he doesn’t know where to go as his home broke. Anupama feels bad seeing Anuj broken. Anuj says he doesn’t regret losing business as he can make it again, but where will he get relations from. He asks where he will bring “his Malvika” (his sister) from. Anuj says he became the poorest man in the present time, in this world.

GK comes there. At the office, Malvika breaks everything recalling Anuj. Vanraj smiles evilly, seeing his inner soul praising him, sitting on Anuj’s Chair (CEO’s Chair). Malvika’s breakdown doesn’t affect him at all. On the other hand, Anupama asks crying to handle himself. GK tells her handling Anuj at this time/phase is very difficult. He says he didn’t understand Anuj’s words yesterday. GK says Anuj supported him when he was alone but today Anuj got alone. He tells Anupama that Anuj made the Kapadia family a happy family. GK says Anuj came for Kapadia family and is going away empty handed.

Anupama tells GK that Anuj has hard work written in his fate and he would surely achieve prosperity. She says Anuj isn’t empty handed. GK tells Anupama that the person having her hand in his would never be empty handed. Anupama asks GK to hug his son, Anuj. Anuj requests GK to never break the promise he made to him. GK tells Anuj that he can break the promise made to God, but not the promise he made to him (Anuj). Anuj requests GK to take care of Malvika and never let her feel the lack of her brother. He tells GK that Malvika’s medicine, therapy and everything is his responsibility now. GK caresses Anuj.

Vanraj makes Malvika sit on the CEO chair, wishes her “All the best” and says congratulations to her. Both of them shake hands. On the other hand, GK tells Anupama that now it’s her responsibility to take care of Anuj. Anupama recalls how Anuj always helped and supported her. She also recalls how Anuj made her strong. She promises GK that she will always support Anuj and take care of him.

In the next episode, Anuj’s slippers will come out while saving Anupama from falling. Anupama will make Anuj wear his slipper like he did on their college reunion day. On the other hand, Vanraj will try to make Anupama fall in Shah’s eyes by telling them that Anupama is going to live alone with Anuj in a live-in relationship. Anuj and Anupama will enter their home.

Reviewed Rating for Anupama 10th February 2022 Written Update Live in twist: 4/5 This rating is solely based on the opinion of the writer. You may post your own take on the show in the comment section below.