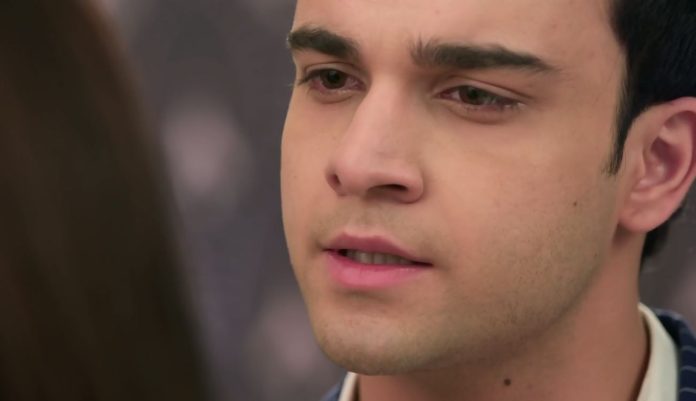 Kumkum Bhagya 11th February 2022 Written Update Ranbir’s denial Rhea curses Prachi badly. Even Prachi doesn’t spare Rhea. She tells that she will spoil Rhea’s honeymoon. She adds that she will neither stop Rhea nor Ranbir, but she will create such hurdles for them that their excitement and fun will drop along with their honeymoon hopes. She tells that her challenge begins here along with Rhea’s trip, Rhea will face such things that she didn’t expect to happen. Prachi’s shocking confidence makes Rhea really terrified. Rhea’s mood gets spoiled hearing about the challenge. Prachi advises Rhea to think that she had the chance to delay her honeymoon. She leaves Rhea puzzled and thinking.

Rhea doesn’t focus on Ranbir, and thinks of Prachi’s plans. She wonders what would have Prachi planned against her. Prachi doesn’t plan much, but plants a seed of doubt in Rhea’s mind that kills her joy. Rhea and Ranbir leave for their honeymoon. Ranbir realizes the mistake he made. He doesn’t want to make any such mistake that can’t get rectified later. He gets in dual minds, on recalling Prachi’s insulting remarks on his love. Meanwhile, Pallavi tells Aaliya that Rhea and Ranbir aren’t here, so they shall use their absence and teach a lesson to Prachi. Aaliya already hates Prachi. Will Ranbir deny his love to Rhea and fix his mistake? Will he overcome his emotional conflict and prove love is mightier than hatred? Keep reading.

Earlier in the show, Rhea is glad that her enemy left the battle ground. She is still mentally prepared to face Prachi. Prachi gets to hear Rhea’s words. Pallavi asks Vikram to see off Ranbir and Rhea. Vikram tells that he has to make an important call. Rhea tells Aaliya that she had gone to check Prachi, who isn’t anywhere. Aaliya can’t believe this. They laugh that Prachi has left when she got defeated. They see Prachi in front of them. The sight causes a new worry to Rhea.

Rhea angrily asks Prachi what is she doing there. Prachi shocks her saying she will come along. She asks Rhea to relax, she has no intention to come along, she doesn’t like long drives, she can’t tolerate Rhea and the long trip also. She asks Rhea to go. She bids bye to Rhea. She tells that Vikram’s driver won’t be coming, he is unwell, so she has arranged another driver for Rhea. She tells that the bill will be sent to Ranbir’s office. She asks Pallavi to call the driver and check if she doesn’t believe her. Rhea asks Prachi why is she losing the chance of spoiling the honeymoon. Prachi tells that the honeymoon didn’t start yet, there is no fun to stop Rhea here, it will spoil when Rhea reaches Manali.

The driver tells Pallavi that he isn’t well, he informed Prachi that he won’t be able to come. Pallavi tells Rhea that the driver is really unwell. Prachi asks them to believe her. Aaliya asks Prachi not to interrupt now. She asks Rhea to have fun. Ranbir is confused with Prachi’s behavior. Pallavi and Aaliya hug Rhea. Ranbir and Prachi share a moment. He makes Rhea sit in the car. He hugs Dida. Prachi wishes all the best to Rhea. She tells that she just spoilt her honeymoon. She asks Rhea to wait, the challenge is about to begin. Rhea tells that she will miss Prachi. Rhea and Ranbir leave for Manali.

Shahana and Dida don’t want to hurt Prachi’s feelings. Dida tells that Prachi is hiding her feelings. Shahana thinks she did wrong to mock Prachi’s love. She wants to find out what is Prachi planning. Dida tells that they will spy on Prachi and know her plan. Shahana agrees. Pallavi feels relaxed. Aaliya tells that she is still upset because of Prachi.

She doesn’t think Prachi will be happy with Rhea and Ranbir’s honeymoon. She tells that Prachi must be coming up with some big drama. Pallavi tells that it doesn’t matter now, because Rhea and Ranbir are gone. She wants to teach a lesson to Prachi, while Ranbir is away. She wants to oust Prachi from Ranbir’s room. Prachi misses Ranbir a lot. She recalls their past moments of love and care, their filmi honeymoon plans and dreams. She wanted to go to Manali with Ranbir. She cries in his memory. She tells that its good Rhea challenged her, the honeymoon will never happen now. Rhea and Ranbir are thinking why did Prachi arrange a car for them and help them. They suspect Prachi’s intentions.

Ranbir worries that Rhea will feel upset if he steps back now. The car breaks down. Rhea is not tensed as Ranbir is with him. The driver tells them about the car’s issue. He asks them to push the car, while he tries to start the car again. He tells them about the nearby hotel, which isn’t good for decent people. Ranbir is ready to push the car. Rhea thinks Prachi has done this intentionally to trouble them. She asks the driver if they can’t get another car.

The driver tells that the car will come next day. Rhea and Ranbir are left with no option than to push the car. The driver sits in the car and calls up Prachi. Prachi watches the video and gets happy seeing Rhea turning irritated. Dida spies on Prachi. She realizes that Prachi has hired the new driver for this purpose, she won’t let Rhea and Ranbir go on honeymoon. Rhea sees the driver on video call. Prachi asks the driver to give the phone to Rhea. Rhea scolds him. She is shocked to see him talking to Prachi.

Reviewed Rating for Kumkum Bhagya 11th February 2022 Written Update Ranbir’s denial: 3/5 This rating is solely based on the opinion of the writer. You may post your own take on the show in the comment section below.