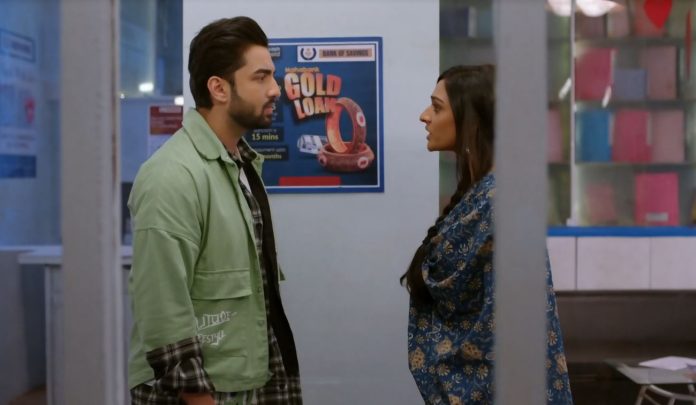 Bhagya Lakshmi 11th February 2022 Written Update Track changer Rishi and Malishka meet Lakshmi at the bank. Lakshmi tells Shalu that she isn’t able to forget Rishi, even when she is trying her best. Rishi gets to hear Lakshmi stating about her husband. The bank employee tells that she has just seen Lakshmi’s husband Rishi outside. Lakshmi tells that Rishi isn’t her husband now. She asks Rishi if he has a heart or not. She tells that he should forget her and get loyal to someone at least now. Rishi gets affected by her indifference. She acts stone-hearted to make him away. The robbers use the paint spray on the cctv cameras to disable the face capture.

Their chief tells the gang that their faces shouldn’t get captured. Rishi and Lakshmi fall into a huge mess when the robbers attempt their task and threaten the people, turning them into hostages. Rishi gets shot, while Lakshmi fails in her attempt to save him from the bullet shot by the goon. Rishi’s Markesh Dosh overpowers his stars and puts his life in grave danger. This shocking event will change the track of Rishi’s life and also prove Lakshmi’s love. Will Lakshmi be able to save Rishi from death once again? Will Rishi understand Lakshmi’s worth for his life? Keep reading.

Earlier in the show, Rishi takes Malishka to the bank, where some robbery gang has already arrived to loot the money. Lakshmi gets the bank account application papers. She gets to see a couple celebrating valentines. She misses Rishi. Rishi arrives there. Rishi and Malishka come across the odd people, unaware that they are the dangerous robbers. Karishma and Ayush are also at the same bank. Ayush gets arguing with Karishma, that she always makes him run like a servant. There are some hilarious moments. The robbers faint down the guards. The girl Shipra gets into a planned argument with Malishka to stop her at the door. Malishka gets her mood spoiled. Rishi asks Malishka to come with him.

Rishi and Malishka get upset when the robbery gang member argues with them deliberately and spoils their mood. Rishi asks Malishka to just ignore the girl. They go inside the bank. Lakshmi senses Rishi, but doesn’t see him. She waits for Shalu. Rishi and Malishka meet the manager, and go to access the bank locker. Shalu gets to see them. She feels hurt seeing them and recalls that they broke Lakshmi’s heart. Bank manager tells Malishka that she is glad to see her back with Rishi. She compliments them. She tells that she is Kiran’s friend and knows Malishka well. She praises Malishka. She tells Rishi that Malishka is the best match for him. Rishi is in a hurry. Manager asks her assistant Mona to assist him, take him to the locker room. She tells that Malishka can’t go there, just the locker holder can go there.

Rishi goes with Mona, while Malishka sits back to speak to the manager. She tells that she doesn’t want to talk about Lakshmi. She avoids the conversation. The robbers hide their faces, so that they don’t get captured in the cctv. Shalu collides with them. Lakshmi calls out Shalu, and finds her upset. Shalu hides her tears. Lakshmi tells that she has to rush back for the job. She appears sad. She shares her feelings with Shalu. She tells Shalu that she just thinks of Rishi all the time, she isn’t able to forget him, she is sensing him even when she knows he isn’t around. She doesn’t want to see him but she is just looking for him. Shalu realizes Lakshmi’s true love for Rishi. She feels more angered on Rishi.

Lakshmi tells that she will go mad this way. Shalu asks Lakshmi if she didn’t see Rishi. Lakshmi asks is Rishi there. Shalu thinks Lakshmi will get hurt if she sees him with Malishka. She lies that Rishi is not here. Rishi gets to see Lakshmi in the bank. He feels the same emotions for her. He forgets the locker and goes after Lakshmi. He gets to hear her words, when she says that Rishi isn’t her husband, he is her ex-husband. She crosses his name on the papers. Rishi thinks he shouldn’t get affected, because she has removed him from her life. Lakshmi tells that she has a habit to link herself with Rishi’s name. She goes to get a new form. She meets Rishi there. He reminds her that he is her ex-husband.

He feels hurt. She is hurt because she made it a true bond, but thinks why is he hurt. He is hurt that she is mocking their relation, she is affecting her a lot by her confusing deeds. She tells that he is still confused. She replies to his silence as if she read his thoughts. Mona asks Shalu about Rishi and Lakshmi’s break up. Shalu tells that she doesn’t think so. She thinks they still have a relation. The robbers take their positions. Rishi keeps the jewellery in the locker. He thinks to give the valentines card to Malishka and cheer her up.

Lakshmi takes a new form to fill. Shalu tells Mona that she is Lakshmi’s sister. Mona tells that she made a mistake. Shalu tells that she won’t tell anyone about the form’s mistake. Lakshmi asks someone about the address row. Yogesh greets her and tells her that he remembers her, he saw her with Rishi, Rishi is his brother’s good friend, he is a good person. Rishi meets Yogesh. Yogesh asks Lakshmi why did she come to the bank for a little thing. He tells Lakshmi about the new offers from the bank. He suggests them to open a joint account with free facilities. He hands over the joint account form to Rishi. Rishi fills the form. He gets into a moment with Lakshmi. Yogesh makes her sign the form as well. He tells that he will become the best employee of the month if he reaches the target by opening their joint account. He adds that his dad will be very happy with his success. Lakshmi signs the form on getting emotional. Stay tuned.

Reviewed Rating for Bhagya Lakshmi Bhagya Lakshmi 11th February 2022 Written Update Track changer: 4/5 This rating is solely based on the opinion of the writer. You may post your own take on the show in the comment section below.