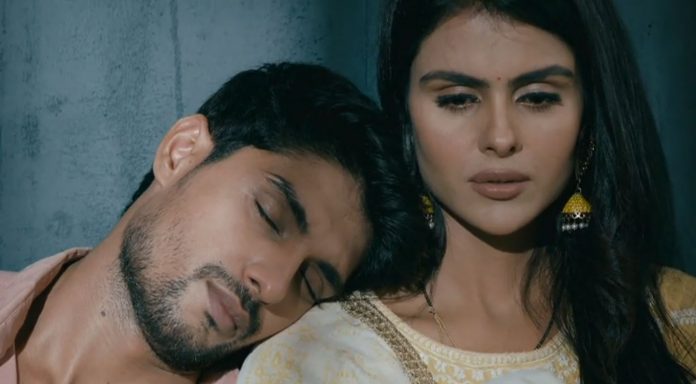 Udaariyaan 10th February 2022 Written Update Filmi romance Tejo seeks Rupy’s blessings. She wants to stay in peace in the Virk house and also restore the peace for others. Rupy is worried that her peace will shatter if the person she loves hurts her again. He fears that Fateh will hurt her. Angad accepts that Tejo loves Fateh, and she won’t accept anyone else in his life. He praises her that she is sufficient to help herself, but its just his friendship that he wants to help Tejo. Fateh has no idea about Angad’s depression. He doesn’t believe Angad. He wants to be double sure this time. He can’t let Angad hurt Tejo. Later, Fateh and Tejo are seen in a romantic filmi scene, where they have tears in their eyes for their separation and also the satisfying relief that they are close and able to stay together.

They see each other while staying distant. Fateh lies on the cot to sleep, while seeing Tejo in her room. Tejo shows her support to him by wearing the dupatta he gifted her before. She also lies down while seeing Fateh. A romantic song plays in the background, while Fateh and Tejo are lost in each other. Jasmin can’t stand the sight, that proves her defeat. She can’t see the lovers accomplishing their love story. She wants to make them separated to fulfill her revenge and attain her peace. Jasmin swears to trouble Tejo and oust her from the house. What will Jasmin do now? Keep reading.

Earlier in the show, Fateh confronts Angad and asks him about his intentions behind helping Tejo. He tells that he had seen Angad’s madness for Tejo and can’t believe that Angad reformed. Angad accepts that he loves Tejo and had gone crazy in her love, but now his mind is at its place and he is just correcting whatever wrong he did in the past. He asks Fateh not to judge him because of his insecurities and just let him help Tejo. He wants to be Tejo’s good friend, knowing she will always love only Fateh. He tells that he will never try to win Tejo, because she belongs to Fateh. Fateh leaves Angad with a warning, that he will keep a watch on him until all his doubts get settled.

Tejo and Fateh share a cute moment, when they stay in front of their eyes and acknowledge their mutual feelings. Fateh can’t trust Jasmin, who hates Tejo and can do anything against Tejo this time. He thinks to better sleep outside Tejo’s room and protect her. Jasmin finds them very much in love, and hates the sight even more. Her anger makes her trouble the Virs again. She locks the kitchen to stop Gurpreet from making any breakfast for Tejo, who had made her fall on the ground. She tells that its a punishment for the insult that Tejo caused to her. She also asks them not to order food from anywhere. She wants them to stay hungry and then apologize to her. Tejo informs Rupy and Satti that she is okay in the Virk house. They are stressed because Jasmin will make her stay tough.

Tejo finds Jasmin’s new drama of locking the kitchen. She tells Jasmin that the latter’s evil deeds will not make her out of Virk family’s heart, the family will love and respect her more seeing how disgusting Jasmin has become. Jasmin asks Tejo to stay happy with the family, without the food. Tejo wants to find a way to feed the family elders on time. She also thinks to find a proof against Jasmin, by which she can save Amrik from the accident case. Tejo and Fateh get active on this front, to hunt for proof against Jasmin. They keep an eye on Jasmin’s activity and wait for her outing so that they can check her room. Fateh stays connected with Tejo on call, while she leaves for the college.

Fateh finds Jasmin’s room locked. He fails to find any evidence. The family stays hungry, but Tejo rushes to Sandhu house to get their help. She gets the food prepared by Sandhu women, and rushes back to Virk house to feed the family. Tejo and Fateh take care of the family. Fateh feels so proud seeing Tejo looking after the family well. Nimmo tells that Tejo is really smart to send Jasmin to the mall by taking Sweety’s help. Tejo replies that she has turned smart to answer Jasmin’s every evil, she will always have a solution for the problems laid by Jasmin. Tejo asks them to finish the food quickly and not let Jasmin know about it. Fateh thanks her, but she tells that she is serving her own family.

Jasmin returns home, and thinks the family members are still hungry. She finds Candy with a paratha, and gets the truth out of him. He tells her that Tejo has fed the entire family. Jasmin rebukes the family for going against her. Tejo tells Jasmin that she can’t control anybody from now, she will always be there to look after them. She adds that she will become a poison like Jasmin to treat her evil. She isn’t scared of Jasmin, who continues to threaten the family. Fateh asks the family not to worry about Jasmin, who can’t do anything against them. Tejo doesn’t want Jasmin to mistake her love as her weakness.

She also declares that she will answer back Jasmin from now. Jasmin gets angered. Fateh and Tejo come up with a way to cheer up Candy. They bring a puppet show with Tejo and Jasmin’s story. Fateh encourages Tejo that she will be the one who will ultimately win, and he will always be there to protect her. They end the day on a hope that the next day will bring something good. Jasmin doesn’t stop insulting Fateh. stay tuned.

Reviewed Rating for Udaariyaan 10th February 2022 Written Update Filmi romance: 4/5 This rating is solely based on the opinion of the writer. You may post your own take on the show in the comment section below.