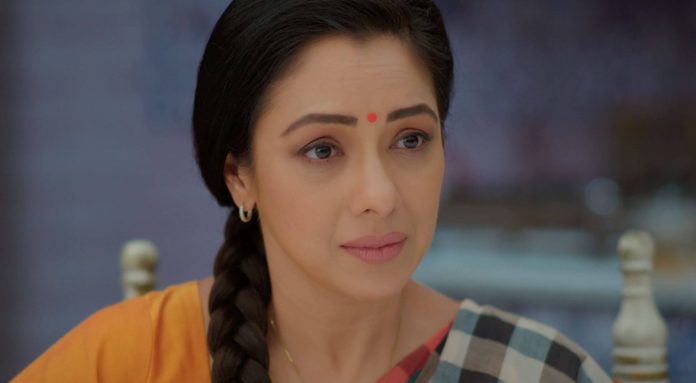 Anupama 11th February 2022 Written Update Anu’s confession Anupama grabs lost Anuj’s attention using a whistle. Anuj sees “Start” written on the road. At Kapadia office, Vanraj feels happy touching Anuj’s chair. He sits on it and says “Vanraj Shah is back” with anger. Back at the park, Anupama speaks motivating poetry (Shayari) for Anuj. Using poetic words, Anupama tries to encourage Anuj to start afresh. She explains to him that he can’t be defeated as he has his love with him. Anupama also explains to him that no one is left with whom time hasn’t deceived. She explains to him that walking on the path is a win but sitting in thoughts is a defeat.

Anupama tells Anuj that he can’t get defeated as he has his love in his support. Anuj recalls his and Malvika’s last office moments with each other. Anupama again and again tries to explain to Anuj that she is with him and asks him to start afresh. She further explains to Anuj to rebuild everything with her support (his love). At Shah house, Bapuji explains to Samar that a broken person handing another broken person needs much strength. Samar says once again Vanraj ruined his mother’s happiness. He says that Anupama lost something but Anuj lost everything. Samar wonders what Anuj must be going through.

Bapuji explains to Samar that when Lord Ram sacrificed the King post and responsibilities except him everyone went sad. He tells Samar that Lord went sad because of leaving his family, not the King post. Bapuji says must be only going through sadness of leaving his family, not his post or business. He tells Samar that they can evaluate Anupama’s sadness as on one side her dreams broke and on another she would be seeing Anuj breaking down. Baa talks to Paritosh and tells him that no one is seeing Vanraj’s efforts and are instead worried about Anupama and Anuj.

Paritosh agrees with Baa when she says that Anuj and Malvika were already going through differences but everyone is blaming Vanraj for their separation. He says Vanraj isn’t at fault this time and God is giving him his efforts fruit. Kavya enters her room and feels happy thinking that Vanraj isn’t interested in Malvika, but his dreams. She tries to explain herself and that Vanraj is just using Malvika and her company to fulfill his dreams. Kavya thinks that Vanraj gets affected by her actions and words maybe because he still loves her. She explains herself to have some patience as she can also benefit from Vanraj. Kavya says an accident/incident with someone can become an opportunity/chance for someone else.

She gets determined to find out the opportunity to get everything back. At the park, Anuj saves Anupama from falling. Anupama starts making Anuj wear his fallen slipper. When Anuj tries to stop her, she asks him why a man making a woman wear slippers is considered a prince and a woman making a man wear slippers is considered indigent. Anuj recalls making Anupama wear her sandals on college reunion night. Anupama says all relations/relationships should have equal respect and value of men and women. She reminds Anuj that he supported her a lot and asks him can’t she give him even a little support in exchange.

She reminds Anuj that she also stayed in his house earlier. Anupama stops Anuj from making any excuses. She tells him that she will go with him wherever he goes but won’t leave him alone. Anupama asks Anuj to decide if he is coming with her or if he wants her to walk behind him, wherever he goes. Anuj tells Anupama that it’s his work to walk behind her. Anupama tells Anuj that the smaller the house, loneliness feels less in it. Anuj gives his hand in Anupama’s hand and walks with her to their home. “Jab koi baat bigad jaaye” plays in the background. On the other hand, Malvika returns to her house with Vanraj.

She runs and hugs GK tightly. GK gives Vanraj a disgust and angry glare. He asks Malvika if she is fine. Malvika asks GK if Anuj returned home. GK tells Malvika that Anuj named his house in her name too. Malvika tells GK that name on papers doesn’t matter as this house belongs to both Anuj and her. GK tells Malvika that Anuj left home like he left office. He also tells Malvika that Anuj took promise from him to be with and near her always. GK asks Malvika to sit till he brings tea for her. Vanraj asks where will Anuj live, if not at his home. GK says Anupama called and informed him that she is taking Anuj to her house. As GK leaves to make tea, Vanraj again starts polluting Malvika’s mind against Anupama and Anuj.

Malvika leaves to her room dejected. Vanra thinks to use this point in his favor. On the other hand, Anupama welcomes Anuj to their home. Baa sees Samar and Bapuji leaving for somewhere and questions them. They tell her that they are going to meet Anupama as they can’t find peace till then. Baa asks Bapuji if he remembers that he has a son too. Bapuji that he is part of Vanraj’s sadness, happiness, sinful and holy works. He says he desperately wants to forget a son like Vanraj, but can’t. Baa says not Vanraj but Anuj and Malvika committed a sin. Bapuji asks Baa to stay quiet as her son has got everything.

Baa says Vanraj didn’t get a treasure but something by his efforts. Bapuji tells Baa that Vanraj didn’t get his efforts fruit but of cleverness. Baa tells Bapuji that he finds all the world’s evilness in her son only. Kinjal asks Baa to let Bapuji go wherever he wants to. Paritosh asks where will Bapuji go as they don’t know where Anupama and Anuj are. Samar says he is trying to call Anupama and will get to know where Anupama and Anuj are soon. Bapuji wishes that Anupama and Anuj would be safe and sound. Vanraj comes and asks everyone to not worry and be happy. He seeks Bapuji’s blessings for his new start. Bapuji ignores Vanraj and asks Samar to come. Vanraj tells everyone that Anuj and Anupama would live together in the same house now.

He tells Bapuji that his loving and great daughter Anupama is going to live in a live-in relationship with Anuj. Vanraj’s low thinking makes everyone feel disgusted. Baa says Anupama has gone mad. She asks Bapuji to bring Anupama to the Shah house and asks Anuj to manage himself. Bapuji tells Samar that it’s of no use to beat their head on a wall. Kinjal tells Bapuji that she is coming with him. Paritosh asks Kinjal to stop supporting Anupama in her mistakes. Kinjal tells Paritosh that he makes the decision that Anupama is at fault even before she does anything. Paritosh says the vice-versa. Kinjal tells Paritosh that till now Anupama didn’t do anything wrong and won’t do anything wrong even today. She leaves with Bapuji and Samar.

Vanraj asks Baa to give him tea. Kavya suddenly says she will make tea. This shocks everyone. Kavya goes to make tea with a smile. Anupama brings tea for Anuj. She asks Anuj why he is sitting so tense. Both Anuj and Anupama recall the moment when Anuj read Anupama’s mistakenly sent message and ran to her rescue. Anuj tells Anupama that there is a difference between that time and today. Anupama tells Anuj that at that time he used to come to her home but today came to their home. Anupama’s words surprises Anuj.

Reviewed Rating for Anupama 11th February 2022 Written Update Surprising confession: 3/5 This rating is solely based on the opinion of the writer. You may post your own take on the show in the comment section below.