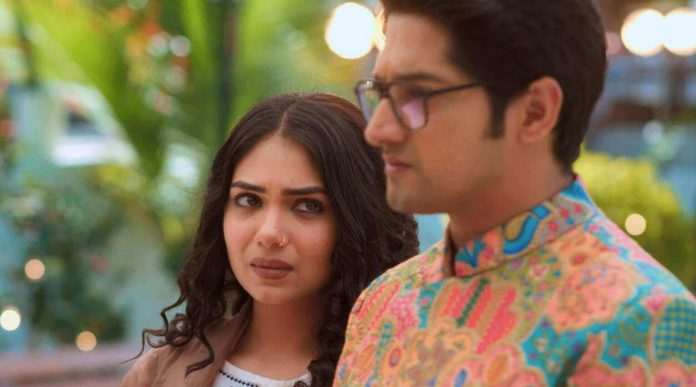 Abhimanyu takes her to a window. He asks her to look outside. Akshara gets shocked to see Anisha holding Kairav’s hands. Abhimanyu tells Akshara that Anisha is his cousin, Mahima and Anand’s daughter and Parth’s younger sister. He says Anisha ran away and returned again. Akshara asks why Anisha and Kairav are together. Abhimanyu tells Akshara that Kairav and Anisha love each other. He apologizes to Akshara for hiding the truth from her. Akshara runs outside the house, Abhimanyu runs behind her. Both of them fall on the ground. Anisha runs to help Abhimanyu, while Kairav runs to help Akshara.

Neil happily watches the Basant Panchami video. When he sees Anisha in the video, he feels thankful to god that no one knows that she is here. Neil gets shocked to see Mahima looking at his ipad. She leaves, informing Manjiri that she is going outside for some work and will return soon. Neil thinks there will be a storm in Birla house, if Mahima and Anand get to know about Anisha’s return. Akshara cries in happiness and hugs Anisha and Kairav. She tells Kairav that she is very happy knowing that her brother found his love. Akshara reminds Kairav he made no friends and girlfriend being busy in family and business matters. She tells him that she is very happy that he finally found his love after all.

Akshara says Aarohi would get mad in happiness, if she would tell her about his relationship. She tells Anisha that it’s a beautiful coincidence that she is Abhimanyu’s sister too. Akshara asks Anisha if she is fine as she witnessed that she fell into the water and Abhimanyu saved her. She asks Anisha why she hid it as she and Aarohi got badly confused seeing her with Abhimanyu. Akshara says there was nothing to hide in it. She runs and shakes the tree. Flower petals fall from the tree and Akshara smiles with it. Kairav makes Anisha leave his hand. Akshara tells Kairav that she is feeling that life has suddenly got beautiful.

Curious, Akshara asks Kairav to tell her about his relationship with Anisha in detail, since the beginning. Kairav tells Akshara that everything has ended. This shocks Akshara. Kairav tells Akshara that he came to end his relationship with Akshara. Anisha cries and hugs Abhimanyu. She says that she met Kairav when she was alone and thought that there is someone who belongs to her in this world. Abhimanyu tries to calm Anisha. Anisha says she got alone once again. Akshara feels confused. Anisha runs away. Mahima gets shocked seeing Anisha passing away near her car. She drives a little ahead to confirm and sees someone else in Ansiha’s place. Anisha is seen with Akshara. She apologizes to Akshara and wipes her tears.

Akshara asks Anisha to relax and makes her sit on a bench. Anisha again apologizes to Akshara for not letting Abhimanyu and Kairav tell her about her. Akshara forgives Ansiha and tells her that sorry is not said in love and pain. Abhimanyu apologizes to Kairav for bringing Akshara with him. He says he can’t hide things from Akshara. Abhimanyu asks Kairav to not worry as Akshara is very understanding and will understand everything. Anisha tells Akshara that she is just like Kairav told her about her. Akshara says she just wishes that Kairav would have told her. Abhimanyu tells Kairav that he can see that he and Anisha both love each other a lot.

Kairav reveals that he and Anisha met online and had a long distance relationship. He says that he and Anisha used to take care of each other’s likes, dislikes, thinking and understanding. Kairav says that there was no problem or lack of anything in their love. Abhimanyu asks Kairav if he broke up with Anisha after knowing that she belongs to the Birla family. Kairav says yes and tells Abhimanyu that he can understand his feelings being a brother himself. He tells Abhimanyu that their families can never be together. Abhimanyu tells Kairav that they can sort their families’ differences by trying. Kairav reminds Abhimanyu that even his and Akshara’s things didn’t get sorted.

Abhimanyu tells Kairav that his and Akshara’s situation is a little tangled. He tells Kairav that he and Anisha may be lucky. Kairav says sometimes things go more wrong even than they have thought. He tells Abhimanyu that they can’t tell Anisha all this. Kairav says he has to get separated from Anisha without telling her the truth. On the other hand, Anisha tells Akshara that she can’t understand where to go. Akshara tells Anisha that she also stopped running away from the situation and her love. Kairav tells Abhimanyu he will fake evilness in front of Anisha, so that she leaves him herself. He says Anisha won’t leave him after knowing both Goenka and Birla’s differences. Kairav says he won’t let Anisha suffer with them.

Abhimanyu explains to Kairav that everything feels sorted when a person has both his love and family together. Akshara explains to Anisha to confront the difficulties, instead of running away from them. Abhimanyu tells Kairav that he and Akshara are similar as they both think about others first, before themselves. He also tells Kairav that he and Ansiha are also similar as they never give up in love. Anisha tells Akshara that she won’t give up. At Birla house, Harshavardhan tells Anand that Goenkas bad time is going to start. He says Goenkas business will go down slowly. Harshavardhan further says that Goenkas will have to pay for their behavior with them and will also have to bend down in front of them.

Mahima shocks everyone by telling them she saw Anisha. Neil gets tense. Mahima says she doesn’t want Anisha near her. She asks Neil to call Abhimanyu home. Manjiri worries thinking that Ansiha’s return would bring a storm in Birla house. Abhimanyu tells Akshara that Kairav is repeatedly saying that he doesn’t want to trouble family anymore. He says Kairav is even ready to sacrifice his love for family. Akshara tells Abhimanyu that Kairav makes decisions after thinking a lot. She says her brother can’t hurt anyone’s heart. Abhimanyu asks Akshara why his sister is getting hurt then. He says Kairav has to listen to his heart if he has fallen in love. Akshara tells Abhimanyu that Kairav has a burden of responsibilities in his heart and doesn’t make promises to anyone with half heart.

Abhimanyu tells Akshara that his problem is that Kairav is giving up his love without even trying. Akshara reminds Abhimanyu that she also took another way for family. Abhimanyu tells Akshara that he remembers that things got more complicated than getting better and are still complicated. Harshavardhan says Abhimanyu and Anisha both give tensions to the family. Mahima blames Manjiri and Harshavardhan for pampering Anisha which led to her getting spoiled. Harshavardhan says he has been attached to Anisha and Nishtha very much and thus pampered them. He asks Mahima if she should accuse her of spoiling Abhimanyu by pampering him. Harshavardhan asks Mahima to blame her sister Manjiri. This angers Manjiri, Parth and Neil.

On the other hand, Abhimanyu tells Akshara that he doesn’t want Kairav to make the same mistake that they did. Akshara tells Abhimanyu that Kairav may not want to complicate things more for both families and Anisha. Abhimanyu tells Akshara that people in love shouldn’t give up easily as destiny always makes them stand in front of each other. Akshara tells Abhimanyu that they also learnt that things can also get complicated when they do things without giving them a thought earlier. Abhimanyu and Akshara support each other’s siblings. Kairav stops them from arguing further. He tells them he understands their concern but everything is over.

In the next episode, Anisha will reveal to Goenkas that she is Kairav’s girlfriend. Whole Goenka family will be shocked when Aarohi will reveal that Anisha’s full name is Anisha Birla. Abhimanyu, Kairav and Akshara will try to reach Anisha. Goenkas will bring Anisha to Birla house. This will shock Birlas. Abhimanyu, Akshara and Kairav will also reach Birla house.

Reviewed Rating for Yeh Rishta 11th February 2022 Written Update Kairav Anisha love track: 3/5 This rating is solely based on the opinion of the writer. You may post your own take on the show in the comment section below.