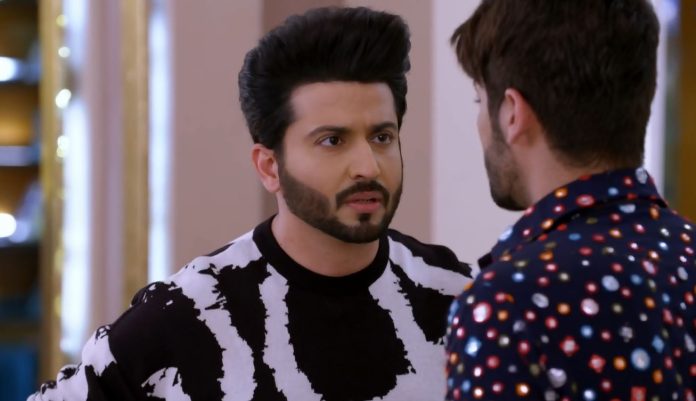 Kundali Bhagya 14th February 2022 Written Update New plotting Sameer tells Karan that his words are not affecting Shrishti anymore. He adds that he had gone to drop Shrishti home, but she didn’t talk to him and just avoided him. He is disheartened that she is punishing him even now for the mistakes he didn’t do. He regrets that he broke up with her after Karan and Preeta’s separation. He wishes Shrishti understands him once. He tells Karan that he dearly loves Shrishti and wants her back in his life, but he is failing to connect to her heart. He tells that Shrishti has turned stone hearted. Karan tells that Arora sisters are such, even Preeta has completely changed after her return, she isn’t the old Preeta who used to value his emotions.

He tells Sameer how Preeta is taunting him to hurt him all the time, he isn’t able to understand her. Later, Prithvi tells Sherlyn that Preeta likes to act as the boss, but now she will know who is the real boss, and that’s him. He finishes the drink and throws the glass away. Sherlyn is overjoyed hearing his next plan against Preeta. She wants Prithvi to throw out Preeta. He tells that he will be teaching a lesson to Peeeta. Meanwhile, Preeta realizes that someone is provoking Mahesh to behave such violent. She wants to find out who is doing that. She wants to bring Mahesh back in the family somehow, but doesn’t know how she will accomplish this task. Keep reading.

Earlier in the show, Sameer drops Janki and Shrishti. Shrishti thanks him and goes home. He fails to talk to her. Janki explains him that he broke Shrishti’s faith and she is heartbroken. She advises him to win her faith now. He understands. He tells that he will try his best. Shrishti hides and sees Sameer. He turns upset that she didn’t speak to him. He leaves. Preeta wonders how did Mahesh react so violently, when he was calm in the Lohri event. She tells that she never felt Mahesh has any behavioral disorder, the incident happened yesterday, Mahesh has no problem, he is okay, but something is done to him that he gets provoked to do this. She wants to bring Mahesh back to the family. Stay tuned.

Sameer tells Karan about Shrishti. He feels she has really changed, she ignored him and didn’t talk to him. Karan tells that she is still the same, she patched up with him. Sameer tells that she has become heartless. Karan tells that Preeta is acting like a hitler and hiding her emotions, she hugged him and then pushed him away. He shares his problems. He tells Sameer that they will find a solution for their love stories. Sameer tells him that there is nothing between Shrishti and him, there is love, but its not accepted by her. Karan feels its his fault to make mistakes, that affected Sameer and Shrishti’s lives also. He promises to unite them. Sameer thanks him.

On the other hand, Prithvi shouts on Kritika that he is always ill-treated in the family. The family hears him shouting and goes to see. Prithvi tells Kareena that Kritika has disappointed him, they don’t understand him, he wanted to save the family respect but they prefer Preeta more than him. He defends his actions. He tells that he isn’t Mahesh’s enemy, he has kept Mahesh in the basement for his safety, but Preeta got Mahesh out and then proved him wrong. He tells that he didn’t want the news of Mahesh’s illness to go out, he had made a new company and transferred Luthras funds so that they can have a back up if Luthras industries share crash. He tells that he always thinks good for the family, but Preeta tries to prove him wrong. He asks them to misunderstand him if they want. He just wants Kritika’s support.

He asks her to be smart and take a stand for her husband. He wants her to defend him in front of Preeta and Karan. Kritika apologizes to him and cries. Prithvi asks the family to not meet Mahesh, because he can attack anyone, then nobody can stop him from going to mental asylum. He plays a convincing drama in front of Luthras. Sherlyn happily hugs Prithvi. Sameer asks Karan about girls’ interest. Karan tells that girls are often confused. He is also confused thinking what does Preeta want. Sameer misses Rishabh. He apologizes to Karan. Karan cries for Rishabh. He misses Rishabh a lot. He tells that he tried to find Rishabh, but couldn’t. He asks Sameer to fight for what belongs to him. Sameer tells that he wants Shrishti, he wants to fight to get her, but Shrishti isn’t talking to him.

Sameer asks Karan what should he do. Karan advises him to go to meet Shrishti right away. Sameer asks how would he do that. Karan asks him to enter the room through the window and just express his feelings. He goes to Preeta to fight for the bed. Sameer thinks to go to Shrishti or not. Kritika tells Kareena that it was not her mistake that Prithvi scolded her. Kareena tells that it was Preeta’s mistake. Bani asks Rakhi to explain Preeta to stop doing such things that affect Kritika’s married life. Rakhi tells that Preeta didn’t do anything wrong. Kareena asks Rakhi why can’t she see Preeta’s mistakes. She doesn’t care what Rakhi does. She tells that she will not sit quiet.

Rakhi tells Kareena that Preeta also loves Mahesh, she thought of his betterment and brought him out of the basement. Bani asks her to see Mahesh in the basement than the asylum. She finds Prithvi’s decision right. Kareena consoles Bani. Kritika tells that she has to fulfill daughter and wife’s duties. She wants to support Prithvi, who is a good person and wishes good for them. She tells that Preeta is selfish and greedy, she is doing everything for money. She wants to be with Prithvi. She tells Rakhi that they should hate Preeta, who accepted that she came in the house for money. Bani asks Rakhi to recall Preeta’s confession. Kareena tells that she knew it long time back, she understood Preeta’s intentions. Kritika tells that she wants to follow her heart and support her husband, by going against Prithvi.

Reviewed Rating for Kundali Bhagya 14th February 2022 Written Update New plotting: 3/5 This rating is solely based on the opinion of the writer. You may post your own take on the show in the comment section below.