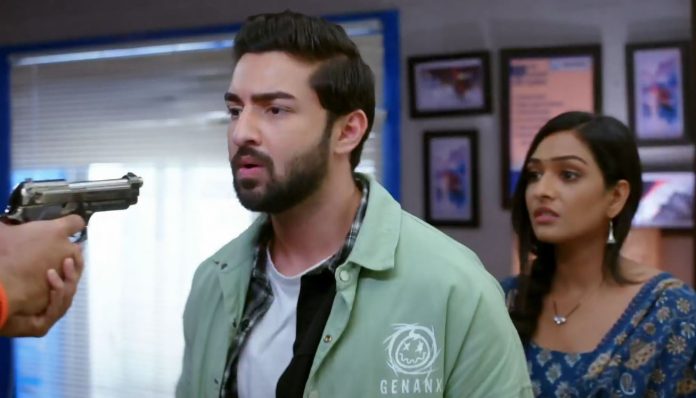 Bhagya Lakshmi 15th February 2022 Written Update Danger strikes Rishi tells Malishka that he is fed up of her madness. He calls it enough. Malishka gets stressed. Lakshmi tells Shalu that there is no meaning of the card, because the lines written are meant for someone else. She tells that Rishi has written the card for Malishka. Ayush tells Rishi that he has given the card to Shalu and asked her to give the card to Lakshmi from Rishi’s side. Ayush finds the sorry card with Rishi. He asks Rishi which card is sent to Lakshmi then. Malishka learns that Rishi is opening a joint account with his wife Lakshmi. She angrily snatches the papers from the manager. She goes violent.

Rishi finds Lakshmi reading the poetry written on the card and crying. He wants to console her. He thinks he has unknowingly hurt her again. Malishka checks Rishi and Lakshmi’s signatures on the form. The robbers take charge and get everyone captive by shooting a bullet in the air to spread their fear. Rishi and Lakshmi are taken at gun point by the robbers. They receive a shock on feeling the life threatening situation. Will Lakshmi save Rishi? Keep reading.

Earlier in the show, Ayush gets mistaken that the card is for Lakshmi. He tells Shalu that this card is from Rishi for Lakshmi. Shalu gets glad to know this. She apologizes to Ayush. He tells that he liked to see the old Shalu. He asks her to help and make Rishi’s feelings reach Lakshmi on the valentines day. He tells that the card is a signal from fate, Lakshmi can read the card and meet Rishi, they can feel love for each other. Shalu doesn’t think so. He asks her to just try and trust him. The bank manager leaves for some work. Rishi meets Malishka. She hugs and kisses him. She checks the sorry card. Rishi tells that the sorry card is for Lakshmi. Malishka asks why didn’t he get a card for her, he can’t spoil her valentines. He tells that he had bought a card for her as well, but he lost it. He thinks Ayush has kept the card with him. He goes to ask Ayush. Shalu gives the card to Lakshmi from Rishi’s side.

Lakshmi tells that the card doesn’t matter to her now. She doesn’t want to listen to Rishi. Rishi and Malishka have an argument because of Lakshmi. She demands him to show the card. He asks her to trust him, he had the card with him. She asks him to take the help from the bank manager. He tells that Ayush has the card with him. He adds that he will not accept her sorry later on. Ayush and Shalu try to unite Lakshmi and Rishi. Shalu asks Lakshmi not to forgive Rishi, but read the card to feel at peace. Lakshmi tells that she won’t get any peace after reading the card. Shalu gets upset. Lakshmi thinks to read the card for her sake. Rishi calls Ayush to go and have the card from him.

He tells Malishka that he never compared her with Lakshmi, she does this comparison herself. He adds that Lakshmi has saved his life many times. Ayush overhears their conversation on call and gets happy. Malishka tells that Rishi isn’t bad, he is too good and that’s why she is scared of his goodness. She adds that she will also save him from dangerous threat. She asks him to remember their love story and madness. She wants to express her anger. She tells that he can’t change all of a sudden. He tells that she is behaving like she just met him, but he isn’t patient to tolerate more of her madness. He wants to prove that he loves her and got the card for her.

Malishka gets hurt while stopping Rishi. Rishi goes to see Ayush. The robbers await the team members to strike the bank staff. Lakshmi tells that everything written in the card would be a lie, because Rishi used to lie to her always. She trashes the card. Her heart stops her. She picks the card back from the bin. She tells that she will go and throw the card on his face, she will ask him to stop such things, she isn’t Malishka to like such superficial things. Malishka vents anger on the robber. She asks him what is he planning that he is following her. She asks if he is planning to propose her, then he should know that she is getting married. Robber laughs on her attitude and pities the man who is marrying her. She angers him. He keeps calm and apologizes. Rishi meets Ayush. He tells that Malishka is thinking that he got the card for Lakshmi, she wants a proof.

She demands him to get the card back. She goes to wait in the manager’s cabin. Ayush asks Rishi not to ask Lakshmi for the card, else she will be insulted. Malishka and Lakshmi don’t see each other. Lakshmi thinks to trash the card and forget everything. She happens to meet a girl, who regrets that she trashed the love card without reading it. She tells Lakshmi about the huge misunderstanding that led to their separation for a year. Lakshmi is glad to see them uniting. She thinks of reading the card once to avoid the regrets.

Reviewed Rating for Bhagya Lakshmi 15th February 2022 Written Update Danger strikes: 4/5 This rating is solely based on the opinion of the writer. You may post your own take on the show in the comment section below.