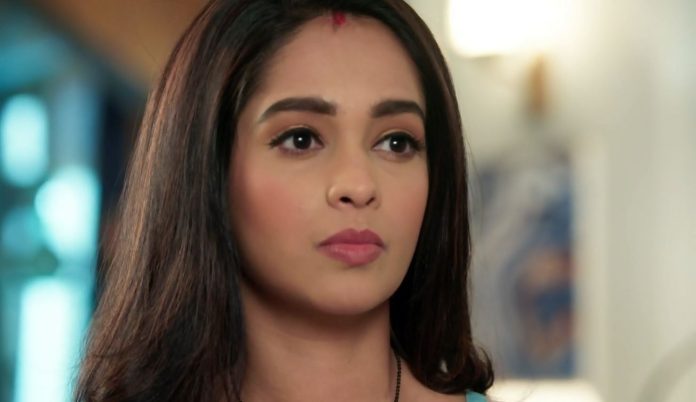 Kumkum Bhagya 15th February 2022 Written Update Prachi big hit Pallavi loses her cool when she finds Dida and Shahana supporting Prachi in the big plans of spoiling Rhea and Ranbir’s honeymoon. More than Ranbir, she is concerned for Rhea, who has become really close to her heart. She wants Rhea to get her happiness, for which she has been waiting for long. She asks Shahana to leave her house, because she is the uninvited and uncalled guest. She tells that Ranbir had been generous to give a place to Shahana in the house, but the latter has no shame to break his marriage with Rhea by staying under the same roof. She calls Shahana thankless.

She tells that Shahana should leave, because she can’t stay with them when she has harmful intentions. She also doesn’t want Prachi’s supporters in the house. She can’t throw out Dida from the house, but can throw out Shahana. She asks Shahana to leave on her own, before she throws her out. Shahana gets humiliated. Pallavi tells Aaliya that she has to change now for her children’s future, she will do something that she never did before. She tells that Ranbir isn’t around and now she has to teach a lesson to Prachi also, because Prachi deserves a slap on her face. Aaliya wants Prachi to stop troubling Rhea. She worries thinking how is Rhea handling the mess. Aaliya supports Pallavi in tackling Prachi.

Meanwhile, Rhea gets a huge shock when she sees the police at the door. The inspector tells that he has come to raid the hotel, where wrong things take place because of the girls like her, who lie at home and come to such hotels for their wrong motives. He tells that girls like her/Rhea encourage such wrong things, they lie to the family about watching a movie and then make a movie themselves. Rhea gets enough of the filthy statements. Her anger flares when he insults her by calling her a call girl. Ranbir and Prachi’s misunderstandings seem to end, once he returns home with Rhea after the failed honeymoon trip. Prachi will be winning the challenge given to Rhea. What will Rhea do now to make her honeymoon a success? Keep reading.

Pallavi orders Shahana to leave, while Dida tries hard to stop this from happening. Pallavi asks Neeti to throw Shahana’s bags outside the house. Shahana tells that she didn’t want to come to stay on Ranbir’s saying, she just came to stay for Prachi’s sake. She doesn’t want to tolerate their misbehavior. Aaliya calls it enough and asks her to leave. Shahana tells that they can’t oust her, such things never happen in their city. Dida asks Pallavi to stop Shahana. Aaliya drags Shahana outside, but Dida intervenes. Dida asks Aaliya to leave Shahana’s hand. Pallavi asks Dida not to fight the family for outsiders.

Dida tells that Shahana is Prachi’s sister, she will leave when Ranbir drops her home, she isn’t an outsider. She asks them to wait for Ranbir’s return. Aaliya answers that even Prachi has no relation with Ranbir, she isn’t their family. Dida taunts Aaliya for staying with them as a guest. Dida asks Aaliya to leave the house soon. She takes Shahana with her. Meanwhile, Rhea informs Prachi that her honeymoon will happen at any cost, its written in fate. She makes Prachi jealous of her happiness. She asks Prachi to try it herself, when one reaches the destination on own. She tells that she likes to stay with Ranbir in the honeymoon suite. She hugs Ranbir and shows it to Prachi. She tells that she can’t show any other moment to her now, its too personal. He asks Rhea if she was talking to Prachi.

Rhea tells that whatever happened was so romantic and adventurous. She asks him why is he feeling so nervous. Ranbir tries to find a way to get rid of her. Rhea tells that she will freshen up and come, he will feel romantic seeing her in the new outfit. He feels badly stuck. He tells that Prachi didn’t confess, Rhea is with him and he is into a big trouble. He thinks of leaving, but he can’t leave Rhea alone. He decides to tell the truth to Rhea on her face. He doesn’t care if Rhea beats him or asks for divorce. He tells that he can’t get romantic with Rhea and give her false hopes. Aaliya tells Pallavi that she has undergone this situation before when she had to tolerate someone unwanted in the house. She tells that Ranbir will support Shahana. Pallavi tells that she tried her best, but the situation is still the same. She blames Dida for supporting an outsider Shahana.

Aaliya tells that Prachi is making her team stronger by getting Dida, they should make Prachi out before Ranbir comes back. Pallavi doesn’t want to get into this drama. She tells that she can confront Prachi, who would misbehave with her. She adds that it will be better if they trouble Prachi and make her leave the house on her own. She didn’t think like that evil before, but now she wants to try it out. Aaliya tells that the parents have to change to secure their children’s future. Pallavi takes her advice. She tells that she will do what she never did. Ranbir is troubled that he has come on honeymoon in his anger. He wishes he had controlled his anger before.

He analyzes why Prachi is stopping him from moving on with someone else, if she hates him and wants to anger him, then why does she want to make him away, is she hiding something, why is she trying to stop him from going close to Rhea. He thinks it’s a good thing that Prachi lied to stop his honeymoon with Rhea, she can’t see him with Rhea, she had concealed her real feelings, she loves him, she wants to do with him. He understands that Prachi is acting, she can never hide her jealousy. Prachi wonders if Ranbir and Rhea are really close. She grows insecure. She imagines Ranbir and Rhea’s romance. She thinks she didn’t imagine that this can happen, they can never come close and unite. She gets upset that she didn’t think of the next steps. Ranbir wants to force Prachi to admit the truth. He wants to show Prachi that he loves Rhea, then Prachi will admit that she loves him. He tells that once Prachi admits her feelings, then he will take her away with him.

He feels hurt that Prachi has told such harsh things to him. He decides to make her confess the truth. He gets much hopeful. Prachi plans to find some way to stop Ranbir and Rhea’s honeymoon. She gets an idea. Ranbir gets to see Rhea in the night dress. He gets scared that Rhea is in mood of the honeymoon. He thinks to lie to her that he has an upset stomach. Rhea asks him to compliment her. He asks her to change clothes and wear something warm. She asks him to come close and then she will not feel cold. She asks him to forget everything and just look at her. Ranbir tells Rhea that he needs to talk to her. She goes close to him. He runs to the washroom. She asks him if he is okay. He tells that he just needs two minutes. She waits for him. He feels upset that Prachi got him stuck with Rhea.

He thinks what’s this honeymoon challenge. He doesn’t want to go out, else Rhea will chase his respect. He tries to avoid Rhea. Police arrives at the hotel. Inspector looks for Ranbir and Rhea. Rhea doesn’t know what is Ranbir planning, when he wanted to have a honeymoon trip with her. Ranbir tells that he can’t touch Rhea or anyone else, he isn’t interested in Rhea, he just loves Prachi. He doesn’t want Rhea to vent out anger on Prachi. He can’t spoil things. Rhea asks him to come out. Inspector knocks the door and interrupts Rhea’s special plans.

Rhea gets interrogated by the police. The inspector taunts her on her character. He asks her if she has come with her husband or someone else. Rhea yells at him and asks him to leave. She tells that she will complain about him. He tells that he is also police, he knows such girls who have a bad character and do such wrong things. She throws the water on his face in anger. Rhea gets arrested. She shouts to call Ranbir for help. Ranbir comes out of the washroom to know the matter. Rhea tells that the police is arresting her. Ranbir stops the police. Inspector arrests him too. Ranbir asks their crime. He tells that Rhea is his wife. Inspector doesn’t listen to them. Ranbir and Rhea get arrested.

Reviewed Rating for Kumkum Bhagya 15th February 2022 Written Update Prachi big hit: 3/5 This rating is solely based on the opinion of the writer. You may post your own take on the show in the comment section below.