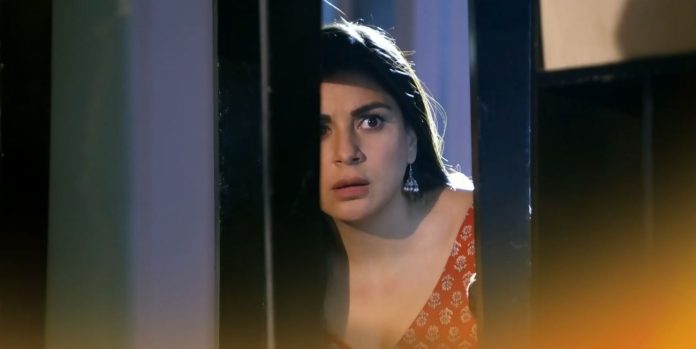 Kundali Bhagya 15th February 2022 Written Update Preeta unravels Preeta goes to the basement to meet Mahesh. She finds Prithvi there and hides from him. She sees him talking to the nurse Mona. She overhears their shocking conversation. Prithvi pays money to Mona and asks her to follow his orders like before, without getting scared of Preeta. He asks Mona to treat Mahesh like before, nobody should meet Mahesh from now, and he should get the same food which they used to give him before. He means to say about the drugs which they used to administer before. He tells that Mahesh should not meet Preeta and family. He asks Mona to remember his instructions. Preeta worries for Mahesh. Prithvi gets suspicious of someone’s presence in the basement. He looks around, but Preeta hides from him.

Earlier in the show, Kritika confronts Rakhi that the latter likes Preeta, not Prithvi. She tells that she has no respect and feelings for Preeta, who is just a fraud for her. She tells that Preeta cheated them, she came in their house for money, and she is torturing them now. She decides to support Prithvi. She doesn’t want Rakhi to support Preeta, who had come in the house as the owner. She reminds that Preeta has come just for the sake of money, because Preeta had mentioned this clearly to them. Kareena and Bani agree with Kritika. They regret that they didn’t take any step against Preeta before.

Kritika wants the family to support Prithvi, and listen to him. Kareena and Bani support Kritika’s decision of opposing Preeta. Kritika’s words hurt Rakhi’s heart. Rakhi is worried that the entire family is misunderstanding Preeta’s real concern for Mahesh, and blindly believing Prithvi, who is the real root of their problems. How will Preeta save Mahesh this time? Will Rakhi and Karan trust Preeta’s decisions and support her? Keep reading.

Prithvi calls Sherlyn smart that she knew his drama. She tells that she understood his drama, he has used Kritika a lot, he didn’t wish Kritika to stay with him so he threw her out tactfully. He tells that sometimes he feels scared of her smartness. She replies that he proved his loyalty for Luthras once again, they must be believing him now, he has provoked them against Preeta. She tells that they used to hate him before, but now with Preeta’s coming, he has become a hero again, and Preeta has become a vamp. He praises her. He asks Sherlyn to spend the time with him, because there is no one around to spy on them. He tells that Preeta shall know now, who is the real boss. They have the drinks and celebrate.

Preeta recalls the helpless situation of Mahesh. She wishes to get some positive hope. She wants to know why did things spoil so much. She is determined to help Mahesh and bring him back into the family. She decides to take any step to get Mahesh his lost pride. Natasha asks Sameer to take help from her than Karan if he wants to patch up with his girlfriend. He tells that Karan is his brother and gives him the right advice. She tells that she can give him a better advice, he can thank her later. He asks why does she want to help her. She tells that she wants to have friendship with him. She expresses her life’s story. He feels sorry. She tells that her mum is alive, but she is not in talking terms with her.

She asks him not to say sorry to Shrishti, but better surprise her and make her smile, befriend her once again. Sameer tells that Shrishti has restricted him, she isn’t ready to listen to her. She asks him to do something really special in her style. Sameer asks what is she doing. She asks him to follow her dance steps and record the video if he wants to convince Shrishti. She plays the song. He refuses to dance. She tells that Shrishti will get a bright smile seeing his dance performance. She asks him to just follow her steps. Sameer records the dance performance dedicated to Shrishti. He follows Natasha’s dance moves. He apologizes to Shrishti cutely.

Natasha sends him the video. She asks him to forward the video to Shrishti. She tells that Shrishti will really get convinced. She wants him to share the good news with her if he gets a positive sign. She goes. He forwards the video to Shrishti. Shrishti plays the video message. She finds it really funny and laughs. She doesn’t want to forgive Sameer. She remembers what he did with her. She can’t forgive Sameer so easily even if he sends such cute videos. Sameer waits for her reply. Later, Karan wakes up Preeta. He fools her and gets inside his room. He occupies the bed. She asks him how can he cheat her and occupy her bed. He tells that the bed belongs to her.

She tells that Sameer is crying, she can hear that. He asks her not to try such tricks on him. She pretends to leave the room. He thinks if Sameer is really crying. He goes to see his brother. She enters the room and occupies the bed to sleep. She asks Karan to go anywhere and sleep. She threatens of calling the police. He asks her if she will get him arrested. They have a cute banter. She asks him to sleep on the couch. He tells that he will never sleep on the couch, he doesn’t get a good sleep, he has to wake up early for the practice. She tells that she doesn’t feel anything when he is around. He asks her to sleep on the bed with him and prove it that she doesn’t feel anything for him.

She agrees to prove it. She tells that he keeps fighting with her, so she will make a pillow border. She makes silly excuses to cover up her feelings. He laughs and calls her excuses a lie. She asks him to practice well and get his number one position back. She tells that she wants him to earn well. She doesn’t get sleep. She tells that she will go out and get some water. He knows she is lying again. Mona pities Mahesh that he is a big businessman and has a loving family, even then he is living alone. Preeta wants to make Prithvi pay for his crimes. She cries thinking of Mahesh. Prithvi goes to check on Mahesh. Preeta doesn’t want to listen to anyone than her heart. She tells that Prithvi can’t stop her from meeting Mahesh. Stay tuned.

Reviewed Rating for Kundali Bhagya 15th February 2022 Written Update Preeta unravels: 3/5 This rating is solely based on the opinion of the writer. You may post your own take on the show in the comment section below.