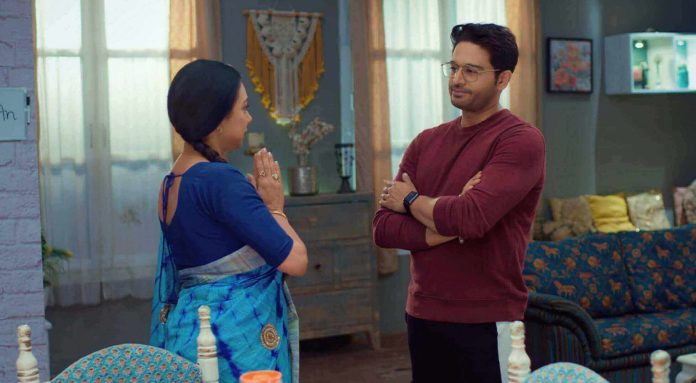 Anupama 15th February 2022 Written Update Surprise for Anuj Anupama wonders why Anuj is sleeping till 9 AM. She decides to not wake Anuj up and let him sleep more. At Shah house, Vanraj gets mesmerized seeing Kavya but tries to ignore his feelings. Kavya asks Vanraj to see as she is his only. She kisses Vanraj’s forehead and wishes him Valentine’s day. Baa gives a flower to Bapuji and they wish Valentine’s day to each other. Bapuji gives carrots to Baa and wishes her Valentine’s day. Children come and tease Baa and Bapuji.

Vanraj goes and sits with his family. Everyone gets quiet. Pakhi speaks up and tells everyone that she loves all of them a lot. Samar and Pakhi have a little funny banter. Bapuji asks everyone how they are celebrating Valentine’s day. Paritosh says he hasn’t thought of it till now. Bapuji says in this country people celebrate all festivals with love as this is Lord Krishna’s country. He explains to everyone that till there is decorum and dignity love will exist but if decorum breaks love will vanish. Vanraj understands that Bapuji is saying all this to him indirectly.

Kavya tells everyone that she has thought of doing something special today. Baa taunts her telling Kavya that she changed her colors as Vanraj’s time changed. Kinjal asks Paritosh if they should plan something for Valentine’s day. Paritosh says first he has to see his office work and then he can see how to celebrate Valentine’s day. Kinjal says Paritosh doesn’t think of anything else than work. Samar tells everyone that he has planned a surprise for Nandini. Paritosh asks Samar to reveal his surprise to him. Samar says he can’t reveal it and asks Paritosh why he wants to know it. Paritosh sarcastically tells Samar that he will ruin his plan by revealing his surprise to Nandini.

Everyone laughs at this. Samar receives someone’s calls and walks away a little to talk. Baa asks Samar if he returned home early in the morning. Samar tells Baa that he was at Varun’s house till 4AM. He says he informed Anupama that he would be late. Baa gets angry hearing it. On the other hand, Anupama wonders how and at what time Valentine’s day is celebrated. She decides to make Anuj’s favorite dishes today. Anupama switches on the radio and starts cooking. Anuj wakes up and gets surprised seeing Anupama dancing and cooking. In between, Anupama acts like Anuj wearing his specs. Anuj comes in front of Anupama and teases her. He praises Anupama’s dance and again teases her.

Abaa doesn’t hear anything from Anupama. She tells Anupama that Pakhi spends the whole time on the phone and something off is going on between Kinjal and Paritosh. Baa indirectly tells Anupama that she has become selfish and doesn’t think about her children or anyone. She also tells Anupama that difficulties would arrive in Pakhi’s marriage due to her in future. Anuj leaves hearing Baa’s words. Baa keeps on taunting Anupama and then disconnects the call. Anupama searches for Anuj and hears a car sound. She gets worried for Anuj. Anuj reaches a tea stall and recalls Baa’s taunts to Anupama. He thinks people give a lot of gifts and balloons to their partners but he has given sadness to Anupama.

At Shah house, while getting ready for office, Vanraj wonders why Anuj and Anupama are still happy after losing everything. He wonders if they are really happy or showing off happiness to tease him or for Bapuji’s sake. Vanraj thinks about how and why Anuj and Anupama concern him. On the other hand, Anupama gets very worried for Anuj. She says she thought of confessing her feelings to Anuj but now whom she will confess her feelings to. Anuj returns home. Anupama scolds him for leaving without telling her. She scolds him a lot and indirectly tells him that she was worried, crying and waiting for him to return.

Anuj apologizes to Anupama but she scolds him again. Anuj tells Anupama that he left because she had to hear a lot because of him. In a scolding tone, Anupama asks Anuj if he will leave her if someone says anything to her. Anuj apologizes to Anupama. Anupama refuses to forgive Anuj. Anuj keeps on doing sit ups to get an apology from Anupama. Anupama asks Anuj to stop as his knees would get hurt. Anuj doesn’t stop doing sit ups. Anupama angrily asks Anuj to return to his home if he doesn’t like anyone saying anything to her. She closes the door on Anuj’s face. Anuj keeps on tapping Anupama’s door. He tells Anupama that he got a little upset hearing Baa’s taunts to her.

Anuj requests Anupama to let him in, otherwise society people would beat him thinking that he troubled her on Valentine’s day. Anupama tells Anuj that she herself would give household weapons to society people to beat him (Anuj). Anuj asks Anupama where he will go. Anupama asks Anun to turn his face and leave. Anuj requests Anupama to open the door. He feels bad when Anupama again asks him to leave. Anuj gets shocked seeing his nameplate on the door of the house in front of Anupama’s house. Anupama comes out and gives Anuj the keys to his new house near her. She tells Anuj that this new house belongs to the owner of her house only and she has talked to the owner and convinced her.

Anupama tells Anuj that she can fight and scold him but can’t leave him. She sarcastically asks Anuj to not trouble her by asking for things like sugar and curd etc. Anupama calls Anuj her new neighbor. “Tere ghar ke saamne, ek ghar banaunga” plays in the background. Anuj smiles and unlocks his new house. Both Anuj and Anupama see each other and smile. Anuj tells Anupama that he would make a home near her home, make a new world in front of her home. Anupama gets shy and Anuj smiles while staring at her. She thinks soon she will confess her feelings to Anuj and end the distance between their hearts.

In the next episode, Samar-Nandini and Anuj-Anupama will get romantic while celebrating Valentine’s day. Kavya will try to get closer to Vanraj. Kinjal will think of starting afresh her love story with Paritosh but will keep waiting for him on Valentine’s day. While Kavya will request another chance from Vanraj, Anuj will get mesmerized seeing Anupama’s Valentine’s look.

Reviewed Rating for Anupama 15th February 2022 Written Update Surprise for Anuj: 4/5 This rating is solely based on the opinion of the writer. You may post your own take on the show in the comment section below.